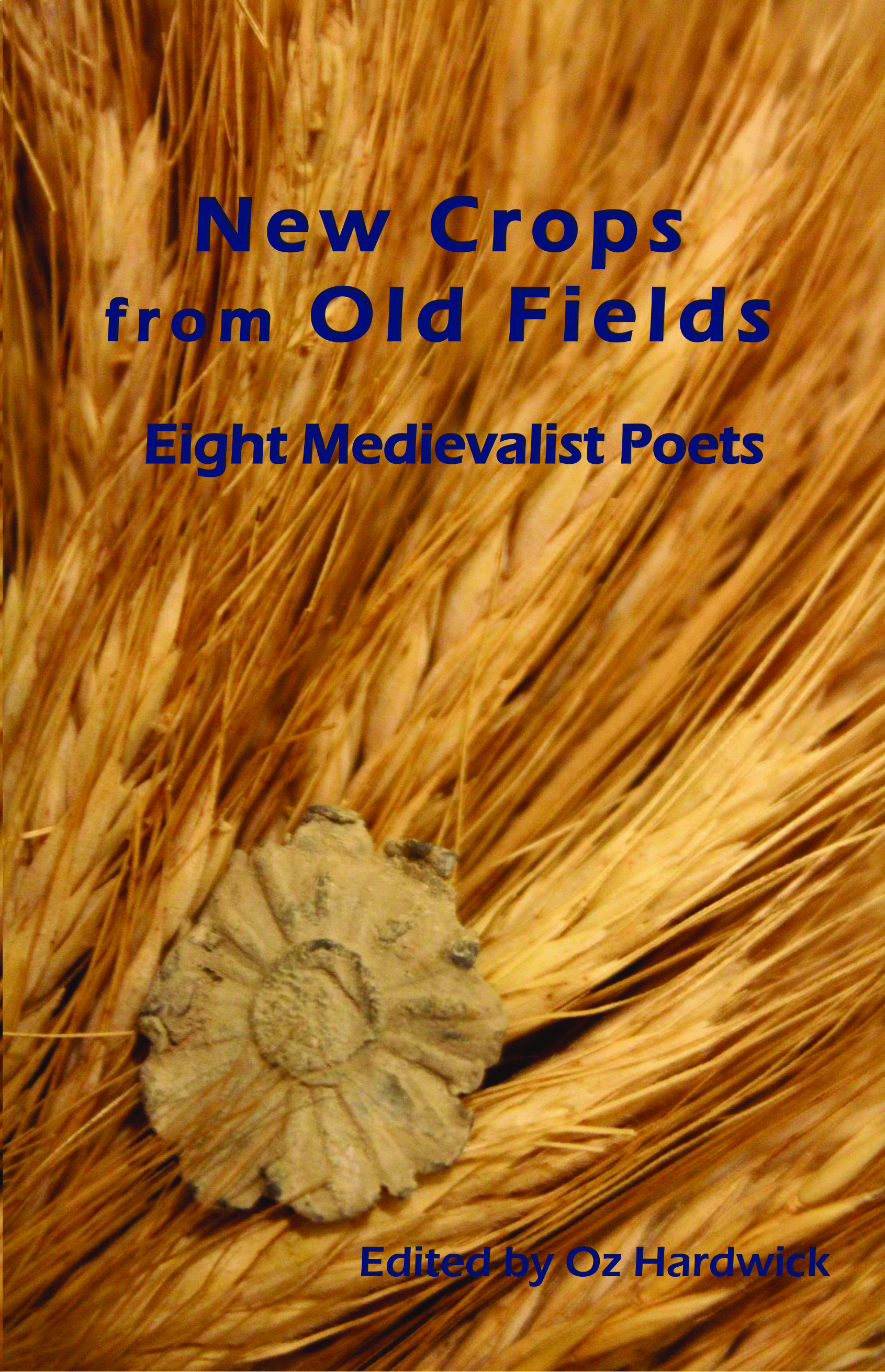 New Crops from Old Fields: Eight Medievalist Poets is an anthology inspired by the poetry of the Western Middle Ages, written by Medieval scholars established enough to really dig below the skin of the genre. Oz Hardwick (the editor and one of the contributors) introduces the poems with an on-the-nose quote from Chaucer’s The Parlement of Foules:

As fascinating as this is, in theory, the resulting poems read more like pre-Raphaelite reworkings than new corn from old fields. There are a few bright lines, and the introductions that each poet gives to their poems are, by and large, absolutely fascinating; you can tell, reading them, that these sharp modern minds really do inhabit an older, more mysterious world. However, most of the poetry is sub-par in terms of quality and that is unfortunate indeed. In this review, I will focus on two quotes per scholar; a few sentences from their introductions and a stanza or so from one of the poems, so that you can get a taste of what the book is like.

The first poet, Jane Beal, views her life in terms of a medieval pilgrimage. She says:

Medieval people often saw their lives as a pilgrimage, too, and this world-view is reflected in the major literature of the medieval English period.

Beal demonstrates this outlook in a found poem titled ‘Questions’, which she constructs out of the things Palestinians and Israeli Christians and Jews asked her on a sojourn to the Holy Land. This is a fascinating idea; unfortunately the questions were not very profound, or lyrical:

The next poet, Jane Chance, describes her medieval-inspired poetry as a body, hidden but naked under its clothes: ‘I say ‘imaginary’ because the poems, like the medieval artistry they emulate, are fantasy, fantastic and fabulous on the outside, naked truth inside.’ Her poem ‘The Chateau de Comper’ takes this image a little further, portraying a woman as a clothed body hidden inside a sealed fortress:

I am protected.
My drawbridge is double:
one bridge fixed over the moat
and another closer to me,
one that lifts. My arms are
locked above the gate, gaffs
grand in pose. I doubt
all softness,
all entreaty,
I refuse to negotiate terms.

This is an appropriately medieval device; the Holy Virgin Mary was often portrayed as a walled and secret garden, impenetrable to man.

Pam Clemens has been a scholar for over thirty years. Her mind has become so used to thinking in these terms that, in her own words, ‘It is no surprise, then, that even in the poems that have no direct, or even indirect, connection to the medieval, I find myself using vocabulary tinged with medievalism.’ She has, it seems, become something of a poet-monk, albeit one who writes beautifully about the second coming of the Green Man. Her poem ‘Wodewose’ is easily one of the best in the anthology:

Wodewose, wild man of the woods
runs mad with his beard of moss;
whatever he touches, grows:
star moss, dogtooth violets, partridge berry,
Indian pipes spring from his step.
Just a pair of eyes glint in ivy
vanishing.

The sixth line would have been stronger without the ‘just’, but even so the imagery is beautiful.

Sensibly, Oz Hardwick uses medievalist thought to come to terms with his own mental illness. The duality of the period aptly reflects his own struggle:

As someone with bipolar disorder, I am acutely aware that the aspects of the medieval which fascinate me, as I have sketched briefly above, make for an equally apt metaphor for the way that I experience the world

One could argue that this means of attaining self-knowledge is one of the things that myth, and religions, are for. Certainly, his poetry has not suffered for it. Hardwick has a Green Man, too, and his is very much alive and leaping in ‘The Green Man Awakes’:

Mine is the voice of the virile vine,
the twisting tongue that tempts and teases,
tangles your senses, sets your mind
rushing, racing, dancing, spinning

M. Wendy Hennequin’s self-introduction made me a little worried. She referred to herself as ‘a poet’ or ‘the poet’ ten times over the course of three pages (a move that smacked a little bit of overcompensation) and then described the joined mental aspects of her self using a cliché: ‘The poet and the scholar in me are as hopelessly entangled as the lines of Celtic knotwork.’ Luckily, her poetry was very good. If she is insecure about it, she shouldn’t be. ‘Guỡrinc’s Lament’ reminded me of Heaney’s translation of Beowulf:

Once were these walls – well I remember –
Carved with serpents, covered with gold,
Shining and splendid. Steadfast and strong,
They bravely stood, when the sea-riders,
Ship-warriors, the shore invaded,
And conquered the sand. Shining, they stood,

A.J. Odasso has the opposite problem. Her brief introduction tantalizingly hints at her experiments with mysticism – ‘the Pearl-poet had strongly influenced my use of such devices as alliteration and kennings, as well as my tendency to write dream visions (literal ones)’ – but her actual poetry was very light, and often riddled with clichés. ‘Second Lives’ was a special offender:

Lost traces, last loves. These slip from me
like a fog. What dreams I can’t recall, I leave
to the ages. You killed me. My blood froze

Joe Martyn Ricke is interested in linking spirituality with the carnality of the flesh; another forgotten medieval tendency. He likes ‘the bloody, grotesque, physical side of late medieval spirituality’ and says that ‘prayers to the wounds of Christ’ make sense, which they do, in context. His poem ‘Felix culpa’ is the closest thing in the book to an actual translation, but this tongue is far from dead. He makes a 15th century poem by an anonymous poet clap its hands and sing:

Adam lay chained, the fucking heaviest chains you can imagine,
like something Blake would receive from an angel and then etch.
He’d been chained up so long I guess he’d even forgotten why.
A vague pain in his side, the absence of a complete skeleton,
reminded him of something

Hannah Stone, the last poet in the anthology, works as a Reader in Easter Christianity. Her research ‘focuses on the spirituality of the most ancient of Christianities’ as it existed before the church began to fragment over doctrines. She writes about pure, pre-crusade pilgrims in lines infused with a sense of gentle longing. ‘Akoimetoi’ focuses on a variety of hermit, known as ‘the weeping ones’, who swore off sleep and, as a result, learned the sky very well:

They watch for invisible gates to open,
waiting with the endurance of streams
trickling their muddy trails under walls,
or the persistence of dawn sliding aside
the drapes of night to uncover new paleness;

Stone is good at describing the details that reach out from a landscape of silence.

Ultimately this anthology was strong on ideas, but relatively weak in terms of poetry. There were passages of beauty, some wonderful thought, and it is very good to see a scholarly book that utilises a majority of women writers. However, most (if not all) of these writers are primarily scholars. This is well worth reading if you are interested in the study of thought-fossils. I am, very much, so I enjoyed this book. Those more concerned with modern life might not enjoy it as much.