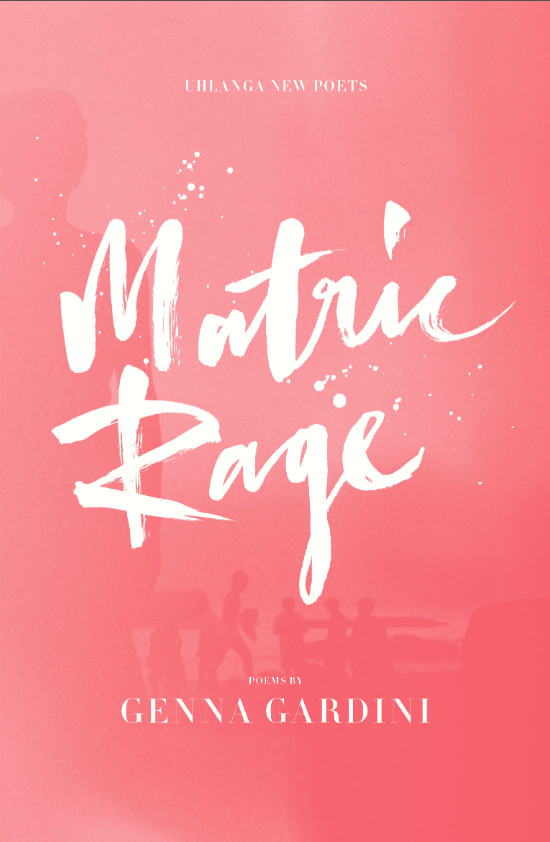 Matric Rage is Genna Gardini’s powerful and strange debut collection, published by the new South African press uHlanga. I was befuddled by the title ‘Matric Rage’ for a while. Thanks to Robyn Cohen’s write up of her launch, I now know that it is the name of a South African student tradition to party on the beach for a week after matriculation. In line with that, the book is separated into four sections: ‘Junior’ ‘Senior’ ‘High’ and ‘Matric’, and are built from poems Gardini wrote from the ages of 19 to 28.

That description is probably going to give you the wrong impression about the collection. Matric Rage is more than your standard bildungsroman, the rage of the title translates into powerful poems on queerness, body-shaming, disability, and more. This scope is matched by the variety of forms and formats chosen by Gardini. While some of the poems are akin to watching two people speak in a private language and trying to find some commonality, particularly in the ‘Junior’ section, there is something about the panache of her style that makes you not care too much about understanding everything.

I’ve not encountered many poems about body-shaming, let alone many successful ones, so it’s a joy to see Gardini tackle this subject in many of her poems. In ‘Whale Watching’, she is almost scientific in her observations – repositioning a fat-shaming comment into a different context:

This is why when you say, “Don’t you think – hey!
Don’t you think so-and-so looks like a beached whale?”
what you’re actually blurting out isn’t blubber
burnt to bone, but a lament against context:

recognizing that something larger than you,
and outside of your language, rose in tandem
without tongue, an absence used as if a blade
in a suicidal pact against place.

Not so in the later poem ‘Fat’ which begins strongly with ‘You cannot be liked’ before laying on hurtful after hurtful expression (all heard by Gardini at some point). It ends in this storm:

You cannot fit into this skin I made for
You cannot wear that swimsuit because
You cannot cut your hair so short, what will distract them from
You cannot have a problem that is not caused by
You cannot understand that you’d be much happier if you’d just lose
You cannot still be so unhappy, after all that, maybe you just need to
You cannot talk about the things you thought you couldn’t have and couldn’t do like it was such a big deal You managed to work your way through (you are the big deal, literally), like it took you till now, from when You were only a kid to realize I was the weight you needed to be rid of. Honestly.
You cannot be so sensitive when we all know that this isn’t what I mean everytime I call you

List poems of this type can sometimes feel lazy, but here, the incisions made by Gardini add to their power. You feel the interruption viscerally – the half of the sentence made more powerful by its absence. The relentless chant of ‘You cannot’ takes these examples of everyday fat-shaming and shows them for what they are: another example of policing women’s bodies.

Anger appears elsewhere too, in ‘Angry Girl’, where Gardini lays claim to her right to anger. The control of the itch/glitch rime and the capitalization of each line makes it feel solid and potent:

My anger doesn’t irritate or itch.
Because it’s a fact you see, not a glitch.
Comforting, it folds and separates,
Like sheets, like a duvet,
And in it I stuff each dismissal away.

Gardini’s gift for a simile can be seen in several of the poems, and on the theme of women being policed, see: ‘I think of the fish’s mouth / as that of a woman in a portrait, / resigned’ (“Sharks Board). Elsewhere a wife ‘tipped into him as stiff and iceless / as the drink he couldn’t buy her then’, eschewing a more expected ‘icy’. The same poem, ‘Goodbye to Rosie’ is full of these:

He thought she would open up
as if an elevator in the building of conversation,
a device he could ride from across to sides
without ever having to construct a scaffold himself.
(I’d say ‘lift.’) He was wrong.
She divorced him a year before.
Now his problems are like his hair, parted.

From these extracts it’s hopefully clear that Gardini’s poetry is funny. There is pain, there is heartbreak, but her mordant humour is never far, applying a critic’s eye to her life. This brings a meta quality to her poem ‘Art Critic at the Beach’, in which the narrator gives an awkward running commentary on the sea:

This seaweed is just spool.

It’s green and long as a projector’s tongue. And the rock it’s on seems platic-knifed. Disembowled like an old VHS. It doesn’t work for me.

But then, suddenly, the sea arrives and edits the scene out, awkwardly
washing towards, replacing. I have my suspicions about the whole thing

Humour comes to the rescue too in ‘Performance Scale’, Gardini’s longest poem, which features in the final section. The poem comes from Gardini’s experience of being diagnosed with Multiple Sclerosis, and it’s hard not to be moved at her depiction of humour as a defence mechanism:

The final poem, ‘Recycling’ in which Gardini confronts the fact that she might not be alive by 2030 head on:

My death came for me when I turned twenty-eight.
It said, “Look, I read all your poems,”
then apologized for being late.

Matric Rage is full of these robust, eloquent poems that wade through the detritus of life’s lemons with gusto. It’s poetry that makes you want to fist punch the air saying ‘Fuck Yeah!’ It merits an audience beyond South Africa where, in the words of her publisher, she has ‘an amazing readership already’. Go buy it. 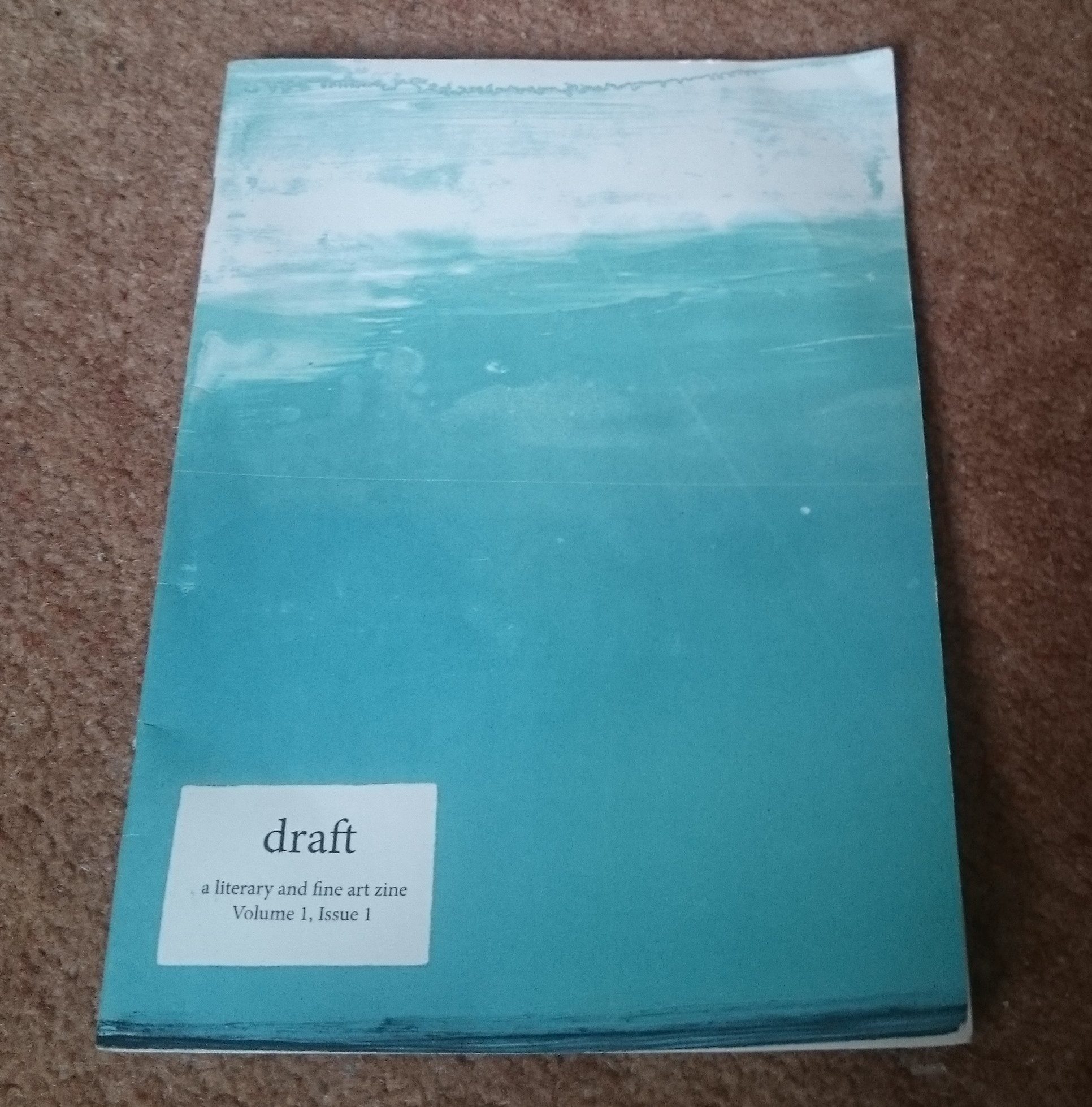 One thought on “Matric Rage by Genna Gardini”