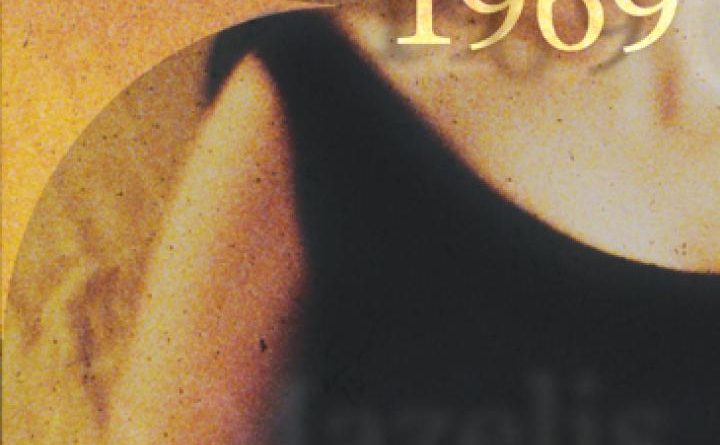 A modern school built ‘in the brutalist style’ sits on the top of a hill. On one side is a housing estate, on the other waste land. When the wind blows from the east the children are assailed in their playground by sulphurous smells from heavy industry. Pipes disgorge ‘waste products of a disturbingly vivid range of rainbow hues’ into the river which flows at the bottom of the hill. The entrance foyer of the school has a high ceiling and ‘promise of echoes’. Thus is the scene set for story-telling. 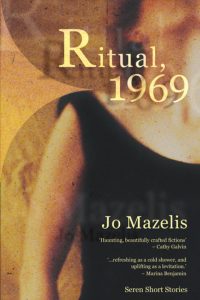 In the title story of Ritual, 1969 Jo Mazelis paints vividly the contrast between the eager teacher, dressed in gaudy colours and the children who are ‘uniformly grey, like baby birds’. Under their uniforms the children, like birds, are feral. The teacher is stymied in her attempt to introduce her class to a poem called The Moon and the Yew Tree by the children’s ignorance about yew trees. But these children, on the cusp of puberty, know more arcane things. They play an ancient levitation game, even though they do not know about yew trees. In ‘Levitation, 1969’ an eleven-year-old girl is a victim of the unbearable cruelty which is perhaps all too commonplace amongst groups of adolescents.

Sewn through this anthology are five stories from the concrete and glass school, exploring the horrors faced by the some of the teachers as well as the children. In ‘Biology, 1969’ a women teacher endures a shocking assault. The way in which her male colleagues react is sparsely told and chilling.

Jo Mazelis draws on myth and fairy tale to explore the mysteries which populate our dreams and nightmares, waking as well as sleeping. In ‘Prayer, 1969’ another teacher from the school, tempted by an unexpected discovery, sees herself in that moment as a character in a story told many times in different ways:

She was Pandora. She was Gretel breaking off a piece of the witch’s gingerbread house, she was Persephone eating pomegranate seeds, she was Sleeping Beauty reaching with the tip of her finger to touch the needle that brings death, she was Alice falling endlessly.

The other stories in the anthology explore the mysterious in many guises – from the rapidly evaporating wet footprints in ‘Caretakers’, through the fleeting encounter between a girl who tries to be good with the eponymous character in ‘The Flower Maker’, to the elusive nature of memory and human connections in ‘Fallen Apples’.

Jo Mazelis employs a poet’s way with language in her stories. She combines a straightforward approach to story-telling with rich descriptions. In ‘Velvet’ she uses contrasting textures and their emotive qualities to convey the way in which a mother feels much more at ease in the company of horses and their foals than in that of the inexplicable ten-year-old children at her daughter’s birthday party. In ‘The Green Hour’ a palette of greens – focussing in on the pure colour of cat’s eyes – is the backdrop for the story of Gwen, employed by Rodin as a model. In the school of the 1969 stories there is a mingling of many strong and suggestive smells and, most powerfully, in ‘Word Made Flesh’ it is the smell of dying flowers which evokes a memory for the exiled Irish girl Molly Finnegan:

I tip them into the sink and as the rotting stems fall I remember the stench of the blighted potato fields back home, the black putrefying mess that stretched as far as the eye could see.

This last story is a re-interpretation of a classic Welsh story, Arthur Machen’s The Gift of Tongues. Others in the anthology read like retelling of old tales, in particular ‘The Twice-Pricked Heart’ with its trope of transformation. The imagery which Jo Mazelis employs contributes to the feel of fairy tale which pervades much of her writing. Apples, birds, the moon, conjoined twins and photographs recur, all potentially symbolic of deeper meanings.

Both ‘Mechanics’ and ‘The Moon and the Broomstick’ feature conjoined twins in the context of the circus, that place of enchantment which is there at night and gone in the morning. ‘Mechanics’ is also full of bird imagery and the cumulative effect becomes visceral when Gerald from the ‘flock’ of cyclists imagines the mechanics of sex with the twins upon whom they have stumbled:

Gerald couldn’t stop imagining those two strange sisters naked. Himself naked too, and those two female bodies closing in on him like wings, or like a hinged mirror, two identical faces swooping closer, and legs and arms entangling him, hands everywhere.

I love the way Jo Mazelis interweaves elements of her stories – this same Gerald also appears in ‘Mrs Dundridge’, an older women who had previously taught him about these mechanics. I love too the way she winds up tension and spools it out to the end of stories and beyond. I found this particularly so in ‘A Bird Becomes a Stone’ in which a girl is a pawn in other people’s stories and – my favourite – ‘Storm Dogs’, full of mythic elements but completely original.

Jo Mazelis writes with a sure touch about lost opportunities and the difficulties that people have in connecting with one another. Sometimes we try and fail, over and over. But always, as in the final story, ‘Undone, 1969’, there is the possibility of a new beginning.