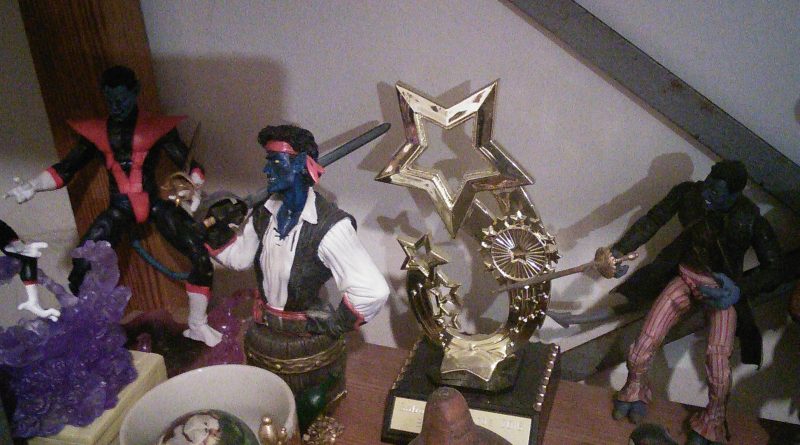 Ahead of the Saboteur Awards 2017, Sabotage Reviews got in touch with some of our 2016 winners to see what they’d been up to since winning their award last May, and where their coveted award now lives…

Since May last year Knives Forks and Spoons Press have been lovely enough to publish Hear What the Moon Told Me  which is an experimental mixed media collage book. Since I started off as a visual artist, it’s been a real joy to be reconnected with my visual practice, and now I am bringing in everything I’ve learnt about writing poems for the past twenty years into the concoction – metaphor, symbolism, tone and voice, the whole shebang! I’ve also received Arts Council funding to work on my fifth Bloodaxe Books collection The Anatomical Venus, which is essentially about women and otherness, touching on witchcraft and the representations of the body – and well, lots of other things . . . The manuscript will be ready by September for publication late this year/ early next. I have a few exhibitions coming up in the coming months so have also been busy playing about in my studio. I’ve just bought some gold leaf. There’s no stopping me now!

Since last May I have been working on a few projects, such as OE- Orpheus and Eurydice, a collaborative, multimedia retelling of Orpheus and Eurydice, which brings together a short film, a collection of paintings and a poetic graphic novel to be published by Bloomsbury (2017) by myself and Kiran Millwood Hargrave. The other central collaborators are Mark Jones (film), Max Barton (music) and Jethro Cooke (music). I’ve also been working on Poor Tom, a collection of paintings and film inspired by Poor Tom, from King Lear. Last year this included an installation at Battersea Arts Centre, a documentary film hosted by the Guardian and an exhibition of paintings at the RSC’s The Other Place and The Bodleian Library. I was also appointed as a Creative Fellow at the University of Birmingham and signed with a literary agent for a narrative non fiction book, provisionally called ‘Wreck’.

As you’d expect from an anthology, several of our contributors have had a busy year. Nikesh Shukla has enjoyed national success with The Good Immigrant, while Richard V. Hirst’s collaborative novella with Jenn Ashworth – The Night Visitors – is published by Dead Ink Books in a few weeks. As for me, I’ve spent most of the year building my proofreading and copy-editing business. I’ve also joined literary magazine The Lonely Crowd as a Contributing Editor. And there’s a new anthology in the works, on a different, darker theme – more on that in a couple of months, hopefully… 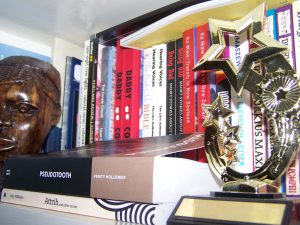 Although the highlight of the last year was undoubtedly my local Tesco getting self check-out machines so I can now avoid awkward till chat, winning Best Spoken Word Performer at The Saboteur Awards comes a close second. It has opened the door to performing at both music and literary festivals around the country and has allowed me to bring my work to new audiences. If I manage to keep up my new found ability to answer the phone to strangers, then another great summer awaits. I am currently working on a second collection, which many of the men who have passed through my life will surely be thrilled to hear. 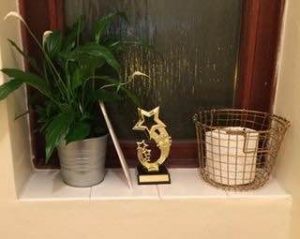 I’ve been involved in a few more things since ‘Border Lines’ won Best Pamphlet at the 2016 Saboteur Awards. One of the poems from it, ‘Borders’, was picked by sci-fi novelist Ken MacLeod, on behalf of the Scottish Poetry Library, as one of the 15 Best Scottish Poems of 2015. Border Lines also received some pretty good reviews in Scotland & England. In August 2016, Tapsalteerie Press published my first collection in Scots, 22 poems, entitled ‘Aye’.

The reaction to it’s been so positive that the Scots Language Association’s recording arm, Scotsoun, are to bring out a CD of 35-40 of my Scots poems later in the year, featuring readings of them by experienced artists, the odd translation into Gaelic & a couple of songs based on included poems.

And I’ve just recently completed a sort of follow-up to ‘Border Lines’, a 60+ page collection called ‘Looking South’, featuring another 44 poems based in & around the Dumfries & Galloway region of south-west Scotland where I live. Indigo Dreams will be publishing this later in the year. And I just heard that a poem from ‘Aye’, entitled ‘Breenge’, has been selected by The Herald’s literary editor, Catherine Lockerbie, as one of the Scottish Poetry Library’s 15 Best Scottish Poems of 2016. I’m very flattered. There are other collaborative & solo projects on the go & I still live by the Solway coast in Galloway, working full time now as a support worker with adults with learning difficulties. 2017 promises to be a good year again.

Since winning the Saboteur Award for Best Reviewer, I have been hard at work on my own writing career. I’ve launched my sixth poetry collection (The Rag and Boneyard, Indigo Dreams) and my first novel (Masque, Seren). I currently have another poetry collection in the works (through the same publisher) with a release date in May. I am regularly performing, both live on stage and via broadcasts. Outside of writing, on top of my study of competitive fencing, I have taken up the study of Historical English Martial Arts, specializing in the backsword and smallsword. I am, of course, still dedicated to reviewing books. Art feeds art, and the close study and careful analysis of other people’s work is a tremendous boon to my own.

It was an incredible honour to win the Best Reviewer Award last year and the statue itself currently has pride of place on my ‘stuff I like’ shelf between a plastic bobble-headed penguin and a Nightcrawler figurine. 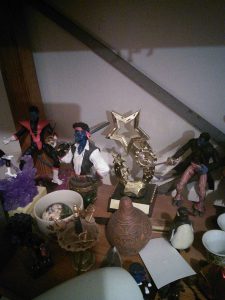 Since winning the Most Innovative Publisher Award last May we have published another twenty titles some of which were under our new BX3 imprint. As usual our programme in 2016 followed our minimum 50% female rule and included Paula Varjack,  Sophia Blackwell, Laurie Bolger, Sara Hirsch, Jemima Foxtrot and Agnes Török  as well as second books from top selling Burning Eye poets Ash Dickinson and Jonny Fluffypunk. Other highlights included presenting a Burning Eye showcase at the Verve Poetry Festival, seeing three Burning eye titles chosen by Spread the Word in their feature celebrating LGBTQA writers for LGBT History Month in Feb, and seeing Salena Godden and Hollie McNish make the shortlist for the Ted Hughes award – if not for their Burning Eye books!

The trophy sits on Jenn’s desk under the protective eye of Ferret Bueller.

Best Novella 2016: The Lost Art of Sinking by Naomi Booth (Penned in the Margins)

Since winning the Saboteur Award for best novella, my book The Lost Art of Sinking, has been selected for the New Writing North Read Regional campaign 2017, with events in libraries across the North. My first novel, Sealed, an exploration of climate change and body mutation, will be published by Dead Ink Books later this year.

My award currently sits on my office shelves–and I’ve recently given birth, so I fiercely guarded my gin during my pregnancy and am looking forward to drinking it soon!

Best Spoken Word Show 2016: What I learned from Johnny Bevan by Luke Wright

I spent the last year touring What I Learned From Johnny Bevan all over the UK, including performances at The Houses or Parliament, Edinburgh International Book Festival, Festival No.6 and Galle Literary Festival in Sri Lanka. I’ve since been commissioned to write a film script based on the original play, which is currently in early development with BAFTA nominees Archer’s Mark.

My second collection of poetry – The Toll – was published by Penned in the Margins in February and I’m approaching the middle of a spring / Summer tour to promote it. I’m also beginning to put together a further Autumn tour. TBA soon.

But mostly I’ve been working on a new epic poem / play. Frankie Vah is the story of a young man desperate to believe in something set against a backdrop of skuzzy indie venues and Thatcher’s Britain. It’ll feature a soundtrack by Ian Catskilkin from Art Brut and debuts at Norfolk and Norwich Festival in May before runs at The Underbelly in Edinburgh and Soho Theatre in London.