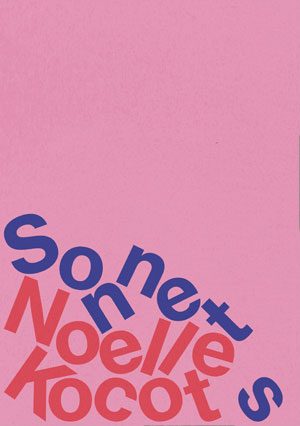 In Sonnets, Noelle Kocot turns the sonnet on its head until it is just recognisable (the jumble of ‘Sonnets’ and Kocot’s name on the cover indicates this). She adheres loosely to her titular form: all the sonnets are roughly Shakespearean, consisting of three quatrains and a couplet, but none of them rhyme in a regular pattern or follow a strict metre. The traditional Italian sonnet was concerned with love, but love appears here in other guises, such as grief for a person who has been lost, and sometimes in feminist spells. Other sonnets explore mental health and existential questions. In the opening poem, ‘Mourning’, the speaker’s emotions are laid bare:

[…] My mourning will never be
Complete. And the individuals who
Populate my life, and I, who ‘populate’

Their lives – I first have to check to see
That nothing sinister is going on. It’s
Not. I offer up the proverbial olive branch,
And a warm fuzzy doll with great big

Talons offers it back. You need time and
Space? Just take it.

Grief is the explicit subject of this poem; throughout the pamphlet, Kocot is rarely esoteric with emotion. The grief is total – it will ‘never be/ Complete’ – and there is a sense that it pervades everything the speaker does. She loses connection to the people in her life, who merely populate it, rather than being an influential part of it. Even when she is writing the poem, her grief and doubt interrupts. It is so disrupting that the speaker’s voice becomes more conversational and she directly tell us that she must check to see if something ‘sinister’ is happening. When she does attempt to reach out to people, she cannot trust them: the doll is fuzzy and warm, but it also has talons, and refuses her gesture.

Death haunts many of the poems in the pamphlet. Many are concerned with trying to find meaning in the world and meaning in death. ‘The Bunny’ opens with a strange, childlike rhyme: ‘The bunny is hopping around. The bunny,/ Yeah, she lives in the ground’, but its meaning does not become clear until the end of the poem. Kocot seemingly imagines some kind of destruction of a world or home:

And green and hexagonal into the light
Of day. The dark dispersal of a million
Clean dishes, the dispersal of the dishwashers

The poem seems to imagine a devastating explosion, the roof (of a house or the world?) ‘Roaring inside’. After a vivid and colourful description of the dispersal (‘Blue panes in a purple/ Triangle’), the speaker merely states ‘I/ Was a child once’, creating a loop back to the beginning rhyme about the bunny. We see, then, that the poem is a reflection of life and death. The speaker, now older, comments that her ‘innards are okay/ Today, I think’, and describes herself as a ‘rhombus’ of ‘haint’. As she contemplates her body, and its wellness, she also considers her future as a ghost.

Not all poems in the pamphlet deal so closely with death. ‘Sonnet for Lizzette’ is an exultant feminist love poem to women. The sonnet begins with a declaration: ‘The psychotic core of any woman – I/ Embrace it!’ as the speaker champions and embraces other women. She continues:

You are the gleam in my eye, and I can’t

Revise you, not at all. We do as the
Atmosphere does, shine, shine.

The poem acts a jubilant call to arms, a celebration of sisters and mothers. At the end, the speaker seems to reach her readers and sisters: ‘I meet you/ Here with every voice, with the bird calls, too.’

In her collection, The Bigger World, Kocot explored writing characters and voices, and this has evidently influenced her approach to the sonnets. In ‘Timmy’, Kocot’s eccentric, Absurdist voice returns:

Timmy is always at the food bowl. That
Toilet bowl is filthy – smells like a men’s
Room. But cousin Lupu is here, the Northern
Lights are here. I am not wise. I struggle

Under the weight of a shoelace […]

The opening remark about Timmy, who the poem is named after, is left at the side while the speaker communicates in non-sequiturs. We might see this as indicative of the speaker’s inability to understand the world: she claims that she struggles, and is not wise, perhaps suggesting that she cannot make sense of the world around her, that it therefore overwhelms her. Later, she says that ‘Madness is/ Out of the question’ but refers to her ‘Risperdal dreams’, and describes them as ‘kind’. If ‘madness’ is ‘out of the question’, it seems as though the speaker is attempting to discuss her mental health in real terms, rather than under a broad, pejorative umbrella term. Her medication causes her to have ‘kind’ dreams. The speaker’s final assertion, that she is ‘made of inner tubes’ indicates acceptance, resilience, a way of mending broken things or her ‘injured mind’.

While reading the pamphlet, it is easy to forget that the poems are indeed sonnets. Kocot seems to fit her voice(s) into the form with ease, but also changes it to allow her characters and speakers to flourish. This is a lively, emphatic pamphlet, filled with character and emotional depth. 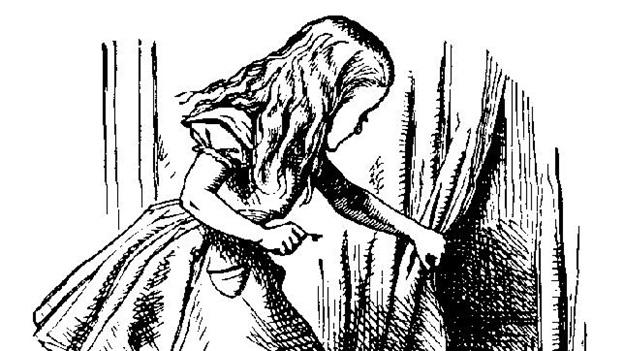 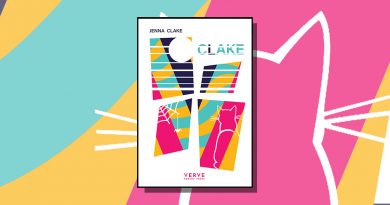 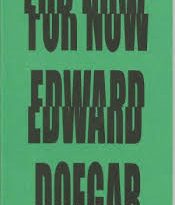 For Now by Edward Doegar

September 27, 2017 Karen Goodwin Comments Off on For Now by Edward Doegar