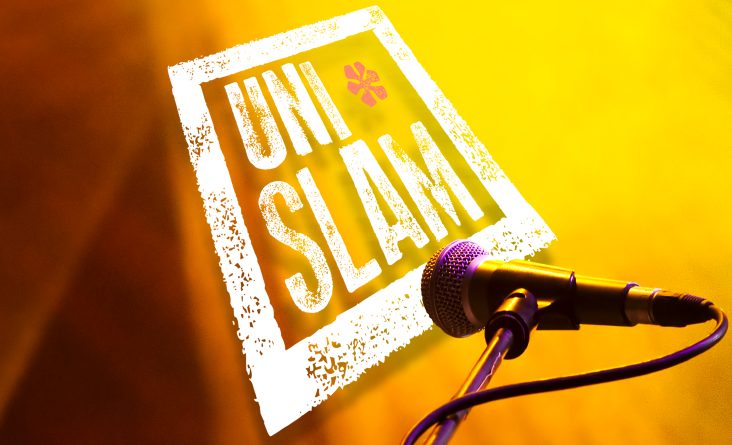 In a wash of blue light, Curve’s Studio stage is simply dressed: four mics are lined downstage, three shard-like trophies on a small table upstage watch over the mics, and, to their right, a line of tables lurking in the dark ready for the judges to take their places. It’s the final of UniSlam18.

Over the previous couple of days, twenty five teams from universities across the UK took part in workshops, preliminary and semi-final rounds, ending up with four teams vying to become UniSlam18 champions.

Before curtain up (or perhaps slam down), audience members sang and danced along to an ’80s fest of Bon Jovi, Prince and Journey’s “Don’t Stop Believin”; I estimate I was one of a handful of people in the audience who could remember these songs first time around. No matter, it gave the place a real gig feel, got everyone in a lively mood and built anticipation nicely.

UniSlam began at the Edinburgh Fringe in 2013. Midlands’ poet and playwright Toby Campion helped coach the Edinburgh University team to victory, and every year since, Toby has organised the event in full. The aim of the event is not only to support poets coming up through university but also “work with groups of young people who experience various barriers in accessing literature and engage them with poetry in an inspiring way”.

Back to the final: Kat Francois is our host, and she performs this duty with warmth, wit and a whole heap of sass.  Erin Bolens delivered an enjoyable ‘sacrificial poet’ slot, warming up the crowd with her poem ‘Home’, a naughty-but-nice reflection on her guilty pleasure relationship with London (being from Leeds).

Teams representing the universities of Kent, Birmingham, Bath Spa and Manchester performed one poem each over four rounds, sometimes individually, sometimes as a group. Poems performed in the semis can’t be repeated in the final, judges score on the quality of the writing and the performance; any performance longer than three minutes loses marks.  The judging panel comprises the mighty poetic talent of Rob Auton, Kayo Chingonyi, Alice Watson (from the Poetry Society), Vanessa Kisuule and Bridget Minamore.  Phew.

A couple of common themes feature throughout the performances: explorations of mental health and, like Erin’s opening poem, reflections on home and living away from familiarity (perhaps not unexpected of a student voice).

A fast-moving show, whoops and hollers of appreciation top and tail each performance.  Audience members also ‘mmmm’ and ‘yeah’ their approval of the poet’s words during the performance, along with bursts of finger-clicking at a particularly good line. This clicking is rather odd, but also distracting as I found myself trying to predict when a wave of clicks might sweep across the audience like a plague of crickets.

(NB I would prefer to name check individual poets, however, they are introduced by university rather than name.)

Kent – a couple of poems stood out, one a nicely-paced, amusing contemplation of beards, with encouragement to

cultivate your inner beard and wear it with good grace

Also, a cheeky poem within a poem, a meta-performance poem which knowingly deconstructed Pythonesque-style what we were all there listening to – tricky for the next person to go onstage and follow, however, the audience loved it.

Birmingham – Often delivering their poems as a group with impressive voices in ’rounds’, and choreographed movement. Really effective, particularly the ‘sadness factory’ poem, and with a more theatrical feel to their performances.

Manchester – as above, poems reflective and personal in style. I enjoyed one of the poet’s take on the home theme, comparing country and city life through wild flowers. The team’s final poem was raw and emotional, and I was intrigued by the breakdown in language and the poet’s sheer force of delivery.

Overall, impressive performances of well-crafted poems, confidently delivered and well-rehearsed.  It is clear there has been some serious bonding and poetry-love going on between the teams and their supporters, with space to explore ideas, express themselves as writers and performers, and respect one another’s work.

An added bonus was each of the judges taking to the mic; Bridget, Vanessa and Kayo all continuing the themes of home and identity with sharp, stinging words. Rob’s poem “Heaven Food” is surreal, shouty and hilarious.

We are reminded this event isn’t about the points, it’s about the poetry. But, it is a competition and trophies must be awarded, so it’s third place for University of Kent, second for Bath Spa and University of Birmingham are UniSlam18 champions.

I’d say this is a fair result – Birmingham certainly had a different and innovative approach, and with their more collaborative performance-style, the embodiment of team spirit. One of the team, Sean Colletti, was also awarded the UniSlam Ambassador Award for his attitude both within his own team, and working with others.

After a seismic week or so for poetry in the media (what with ‘that’ PN Review article), it is reassuring, energising and indeed, a beautiful thing to witness the supportive encouragement wrapped around this whole event; testament to Toby and his team for their positive, inclusive attitude.

Based on this, poetry is in a good place with an encouraging future.