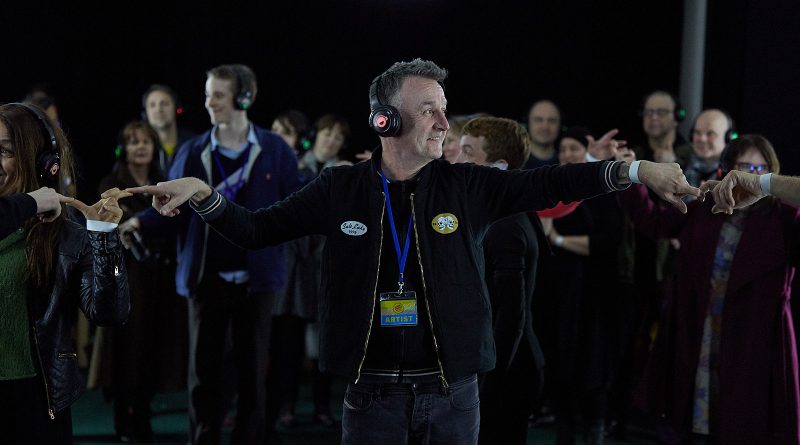 Before physical theatre company Wet Picnic began performing I’d be Lost Without It as part of the Shop Front Festival in Coventry, every member of the audience was asked to don a pair of headphones. The key to making sense of what was going on might actually have been to take them off.

Ostensibly, I’d be Lost Without It was intelligible only by listening to the accompanying soundtrack, fed to everyone individually through their headphones. While the company ‘performed social media’ as a mixture of dance, mime and audience participation, a seminar-style commentary (and some mostly poppy, upbeat music) was delivered directly into our ears in the wholesome, admiring tones of days gone by.

Something about it reminded me of the wide-eyed stranger (played by David Byrne) who made wondering observations such as “Hey! The radio reception is really good out here!” in the Talking Heads movie True Stories.

Made in 1986, True Stories is set in a fictional Texas town where, with a prescience that now seems almost eerie, a computer manufacturer is the major employer. According to Wikipedia, Byrne described the film as “a project with songs based on true stories from tabloid newspapers”.

The advent of social media has, of course, given us access to many more human-interest ‘true stories’ than Byrne could have imagined in 1986 – but has it, at the same time, paradoxically fragmented and estranged us? Experiencing a theatrical presentation via headphones – while at the same time surrounded by other people – stretches the concept of theatre as a shared, communal event. And because I had no way of knowing whether everyone else was hearing the same soundtrack as I was, it also challenges the notion of what is ‘true’.

There are, as our glibly persuasive earpiece guide helpfully informed us, four pillars of the Logged-On World. These include ‘love’ or ‘how to get as many connections as you can’ and ‘procreation’ or ‘how to be the most beautiful one’ by creating multiple versions of the online self. The Logged-On World is presented as a simpler and more satisfying place than the real world:

because building networks is effortless…Like a beautiful circle, it radiates through space.

The ironic nature of the admiring, optimistic narrative voice was most explicit in sequences that touched on the darker side of social media. The persona of Tony, “a forty-two year-old man from Woking” who inhabits the ether as Sarah, “a twelve year-old girl who likes ponies” was apparently less troubling to our commentator than the possibility that he might have mislaid his phone; this was the only moment when the smooth surface of his persona appeared to crack. Opening up beneath him we glimpsed a vision of chaos.

The fourth pillar of the Logged-On World was ‘knowledge’ and here the narration stopped. Instead, we heard a cacophony of frightened voices shouting things like “When I die, how do I get to Heaven?” and “Oh shit, get the fuck out of here!”. Social media, it is clear, cannot answer life’s biggest questions; its siren calls can merely distract us from them.

The piece concluded with some facts: there are more iPhones sold than babies born each year and more people own phones than have access to running water. Despite (or perhaps because of) the internet, I have no way of verifying the truth of these statements.

I’d Be Lost Without It is a tightly-executed and satirically entertaining piece (who doesn’t love that apogee of internet achievement, the parade of toy cats?) that explores the imprint of social media on our individual identities and our relationships with each other.

My only question would be whether we really need another performance about young people stressing over their peers’ addiction to Snapchat and the rest. While this one was lots of fun, I’m not sure it told me anything new.

Towards the end of the performance, I rebelled against the tyranny of total immersion. I discarded my headphones and, for a few minutes, watched in silence (I could still hear, around my neck, a tinny sound clamouring to be let back inside my head). It was an oddly isolating experience. My own mind immediately flooded in, but at the same time, I felt distanced from, and left behind by, the rest of the audience who remained ‘logged-on’ to what was happening on stage. Did that make me more human? Or less? 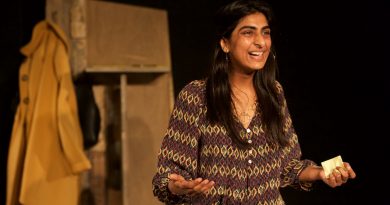 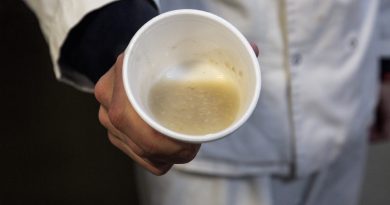 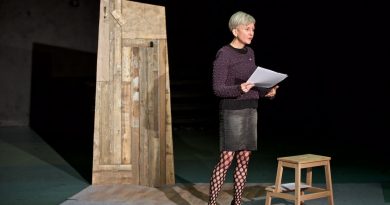