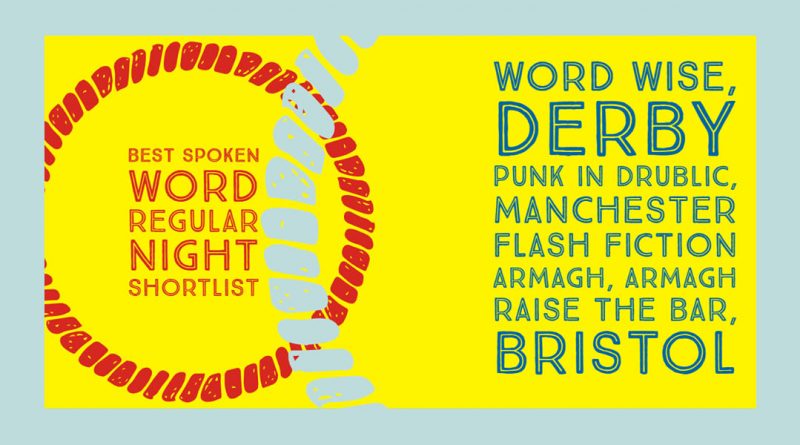 Up and down the country there are weekly and monthly word events that mean great things to the people who run and attend them. We’ve got four of the best regular spoken word nights around up for public vote as part of the Saboteur Awards this year, and to cast your vote for your favourite you can click right here.

Byddi Lee a native of Armagh, has published flash fiction, short stories and her novel, March to November. Byddi co-founded and manages Flash Fiction Armagh and co-edits The Bramley – An Anthology of Flash Fiction Armagh. She is currently writing a speculative fiction trilogy set in a near-future Ireland.

Flash Fiction Armagh is a spoken word event devoted entirely to the art of writing a good piece of flash fiction. It’s an open mic event with a twist as performers are selected ahead of the event itself – rather than on a sign-up basis – based on the quality of submitted work. The event has caught the attention of local news in the area on more than one occasion and it stands as a great source of support for the local writing community.

For more information on this event, you can head over to the Flash Fiction Armagh section of Byddi Lee’s own website by clicking here.

Word Wise was started in 2016 by Jamie Thrasivoulou who hosts the event alongside Sophie Sparham. The night was set up to address the fact that as a rule spoken word artists and poets generally didn’t gig in Derby very much! Since the night started they’ve hosted the likes of Salena Godden, Matt Abbott, Toria Garbutt and Raymond Antrobus. The night is known for its lively audiences and atmosphere!

Punk in Drublic Poetry hosts the violent collision of spoken word poetry and comedy. Its door proceeds and charity raffle takings go to Mustard Tree Homelessness charity. Since its launch in March 2017, it has hosted such acts as Attila the Stockbroker, Dominic Berry, Kate Fox & Jackie Hagan, and most importantly, raised thousands of pounds for the charity. In addition to hosting some of the UK’s best names in Poetry and Comedy, it hosts an open mic section at each gig which priorities inclusivity and diversity.

Keenly invested in nurturing talent, its organiser is proud to have hosted Open-mic slots from acts who have progressed on to headline the night and carve out triumph on the national Spoken word scene- notably Bróccán Tyzack-Carlin.

Raise the Bar is a spoken word events organisation and talent development platform based in the South West of England. As well as providing monthly open mics, writing retreats, charity events and workshops, over the past year or so they have booked shows with packed theatres featuring the likes of Danez Smith, Lowkey, Zena Edwards, Travis Alabanza, Hollie McNish, Shane Koyczan, Kat Francois, Joelle Taylor, Buddy Wakefield, Benjamin Zephaniah and many more. Raise the Bar was recently shortlisted for Most Diverse Production at the upcoming 2019 Bristol Diversity Awards.