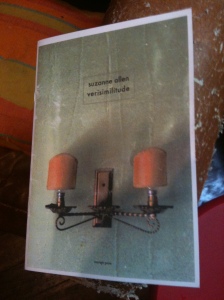 Verisimilitude is the debut pamphlet of Suzanne Allen, a regular on the Anglophone Parisian scene. Published by the equally Paris-based Corrupt Press, it is a modest-looking yet beautiful collection, with an evocative cover of a rundown interior.

I first encountered Allen’s poetry when she gave a performance of her long poem ‘Wail’ (anthologized in Not a Muse: the inner lives of women) a feminist retelling of Ginsberg’s ‘Howl’ at Culture Rapide. While the poem does not feature in this pamphlet, the short opening poem ‘(un)loaded’ feels very much in the same vein, a call for inclusion:

where a (wo)man should be.’

This poem perhaps best summarizes the pamphlet: a questioning of language and of status quo, through humour and heart. Verisimilitude is a collection of love, of loneliness, and the pursuit to palliate the latter through an exploration of language. In her quest, Allen is often a hunter of echoing sounds, take for instance this extract from the poem ‘Smokes and Mirrors’:

‘The way a foreign language pulls at lips and cheeks

the weigh a foreign language pulls at lips and cheeks

The bed saying awake–weigh of words and lips now a knot,

The poem encapsulates Allen’s experiences as an expat: the distortion and frustration of living in a foreign tongue/town. As the title suggests, this is more than mirroring lines: smoke gets in your eyes and language ties itself in knots. At the same time, these quasi-refrains are reassuring, like a language-embrace: it is not just a similitude it is almost véritable.

Allen’s use of assonances elsewhere reflects this same interest in a language of verisimilitude, such as in ‘Candle’ (‘clean cell–/ a lead ladle, a / needle, ale–and’), ‘Elementary’ (‘tam tam / llama / mare / yarn me / a tame tale– / ale-tay’), ‘Sediment’ (‘demented i / tie time in / tinted mist’) and in the title poem itself: ‘Lie still.  Time / is mute lust.  Trust me.’ Though many of these experimental pieces might at time be in danger of being oblique, there is a warmth and urgency to these reverberations as if the semblance of truth can be found by following the ricochet of a word.

There is humour too, though infused with pathos, as is the case with ‘Instant Message’, the transcription of an IM conversation between the protagonist and a stranger:

and a blushing smiley–colon/quotation marks/

The spelling out of punctuation marks and smileys is a particularly effective way of making strange this bodiless flirtation. The smileys are like masks held up when expected, yet it is the very predictability of the conversation and the ‘acting’ of the people involved that makes it poignant. 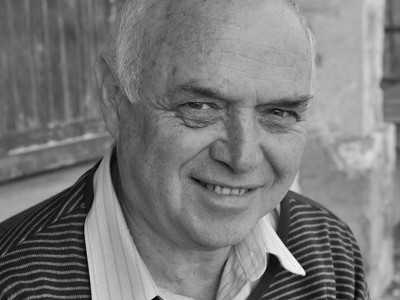