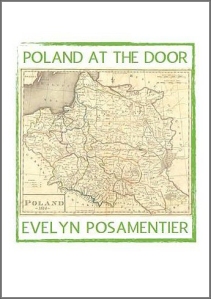 Reading Evelyn Posamentier’s Knives Forks and Spoons chapbook Poland At The Door, which Michael Heller describes on the back cover as ‘resembl[ing] a series of atomized clusters’, I was reminded of the poetry of Paul Celan, whose later poems especially were often similarly short and compressed. The work of both poets is also shot through with the horrors of Eastern European history, marked as it is by wars and the Holocaust. However, although Heller also characterises Posamentier’s poetry as being ‘semi-effaced characters like those inscribed on ancient rune-stones or stelae…double-edged ciphers’, I personally found Poland At The Door less opaque and enigmatic than say, Celan’s Fathomsuns and Benighted, while still making for an intriguing read.

Poland At The Door essentially functions as an extended poem cycle, the individual verses always preceded by the chapbook title in capitals. At the typographical level, this has the effect of partitioning the page into what increasingly resemble little rooms in which the verses are to remain safely corralled. The room-as-protection motif runs throughout the language of the poem as well, but here it is the poet seeking protection in the physical integrity of the room’s space: ‘oh god, I’ve left / the door unlocked’, ‘hold on. hold on. / don’t answer the door’, ‘they can’t find me in this room’, ‘it’s good to be a portable room. / ‘i gather the walls around me.’ Towards the end of the cycle, however, the ‘wobbly room’ appears to take on greater agency:

which door? the portable room

steps forward to accept the challenge.

the guests know not why

they have come. the room

shields itself with its own

With this shift, the room mutates into something that paradoxically seems to simultaneously expose and hide the poet, expressed in lines like ‘the room withers my walls / closes in to conceal me’. Yet if ‘poland at the door’ is cast as the threat of history waiting outside, the room never seems to become entirely complicit in endangering the poet (‘this room / can carry me anywhere. / it is my lover, stepping lightly.’), functioning rather as a kind of interface with the world beyond the door (‘someday the room will escort me / to the free air, which of course / is no longer free’). It is also within the cocoon of the room that the poem reaches its crisis point on the penultimate page, as language symbolically fails to turn away the knock of ‘poland at the door’:

i shred these frozen notebooks

who make a mockery of my desk

i don’t care about their smirks

a typewriter seethes in the corner.

wait for me, says the wall.

it doesn’t matter, says the opposite

wall. the neighbours read their lines.

i feel them pass the door.

Seen from this perspective, the last lines of the poem might appear curiously passive: ‘my planet stands still’, ‘the footsteps have followed history / into the town square. / they have passed.’ After pages and pages of attempting to avoid ‘memories of / ancestors on the attack’, ‘the guests’, ‘the neighbors’, ‘poland at the door’, has the encounter with history then not palpably changed the poet after all? I would suggest this apparent problem can be resolved by recourse to earlier lines in the poem: ‘did someone say something / about a meeting point? / it must be beyond the door.’ If ‘the door might swing open / like a shiny new century’, then stepping through it is to look in two directions at once, embracing the future even as one is embraced by the past. Since the final lines of the poem imply that the ‘i’ of the poem is still observing from within the room, the ‘meeting point…beyond the door’ has not yet been approached. Thus in declining to offer a tidy and convenient resolution to its ongoing narrative, the poem instead leaves the reader poised on the cusp of change and meaningful engagement.

Ultimately, I believe that Poland At The Door is a fascinating read because it carefully regulates its own approach to that singular final moment, paring the journey into manageable portions. Taken in isolation, the verses’ imagery can sometimes seem downright hallucinatory, but what binds the cycle together and keeps it grounded are the linguistic repetitions running through it. While the repetition of the title fosters a looming sense of urgency, this runs parallel to permutations of the phrase ‘the days of awe, the days between’. This seems an apt description of what history actually looks like to most people, with days that leave an indelible psychic mark on personal or collective memory and the days in between them that can just pass us by. Typically occurring as single lines interspersed among the other verses, the phrase acts to slow down the poem’s pace. What could otherwise have been a frantic attempt to shut out the memory of the past is transformed into a moving chronicle of the poet’s steady journey towards engaging it. We all have our personal ‘poland at the door’. Reading Posamentier’s chapbook is one way we can begin to address and welcome it.

One thought on “‘Poland At The Door’ by Evelyn Posamentier”