V. Campudoni’s illustrated short story – On how the Cockroach, after having died, and after a short conversation with Saint Peter, entered the Gates of Heaven – is a sort of modern-day Socratic dialogue, in which a humble cockroach is pitted against a sanctimonious Saint Peter. As the proverbial keeper of the pearly gates, Saint Peter offers various excuses to deny the cockroach entry to the kingdom of Heaven, even as he lets through a succession of figures who appear to contradict the very logic of those excuses, e.g. he first insists that to enter Heaven one must be as tall as himself, and then permits someone shorter than him to pass through the gates. Saint Peter’s pompous manner comes across most clearly when he tells the cockroach, ‘I will miss you greatly. Our time together shall not be forgotten. Moments like these are to be treasured like gold, savored like wine, captured like a smile on canvas. […] You have enriched me and I shall never be the same.’ The exchange is later parodied after the cockroach has persuaded him to bring out ‘the smallest, tiniest, portion of bread’, which it then proceeds to lavish with extravagant praise, hailing the moment of charity with the same words that Saint Peter has already used. 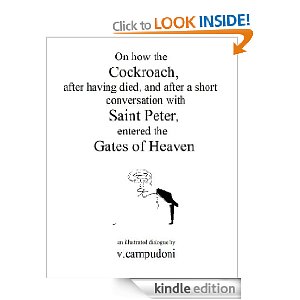 As charming as the dialogue between the cockroach and Saint Peter is, the overall story is not without its minor problems. On the one hand, the increasingly ridiculous reasons Saint Peter provides do make for some amusingly polite exchanges with the cockroach. Yet on the other, their repetitive nature also somewhat belabours the clearly evident point being made about religious hypocrisy through the story. Also problematic is the manner in which the cockroach eventually does make it through the gates of Heaven. Proceeding in ostensibly Socratic fashion, the cockroach succeeds in convincing Saint Peter that ‘if the perception that [they] are standing outside of the gates is indeed not reality’, ‘the alternative must be that [they] are standing within the gates’. The trouble is, of course, that the assertion depends on the assumption that perception and reality must always be ‘Completely different’, eliding the possibility of their coincidence. For a story whose exchanges otherwise rely on sound logic, however absurd the premises from which that logic is derived, this sleight of hand feels disingenuous.

Perhaps though, this is simply taking too seriously a story that calls for a healthy amount of suspension of disbelief in the first place. The overall point of the story—exposing the nature of our prejudices and the unreasonable lengths to which we will go in order to justify and maintain them—still remains valid. The stylised black-and-white illustrations also complement the story, being somewhat reminiscent of the kind of comics one might encounter in The New Yorker. It is worth mentioning that On how the Cockroach… might be thought of as a brief introduction to Campudoni’s only other published work, a novel entitled Wendal, His Cat, and the Progress of Man. This was originally issued in print in 1994, but has now been made available for the Kindle alongside On how the Cockroach…

One thought on “‘On How The Cockroach, After Having Died…’ by V. Campudoni”