House of Blue by Denise Saul; Spring Journal by Dan Wyke; Oh Bart by Martina Evans; The Heretic’s Feast by Michèle Roberts. £5 each from Rack Press. A set of 4 signed copies can be ordered for £15 while stocks last. 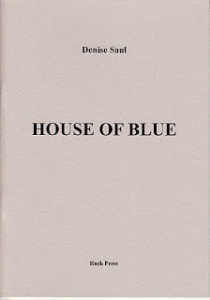 Denise Saul’s is called House of Blue. The seven poems within serve as a good introduction to her work. They are poems of transformation and storytelling, with a strong feminist twist which explores the strength of women, their beauty and their magical power.  In the opening poem, ‘One’, Saul is inspired by the discovery of ‘Lucy’, fossilised remains of a female early human who walked upright. The leg bone which demonstrates this fact is the starting point of Saul’s poem, but she extends this descent into a memory of her grandmother. In the fourth stanza, ‘Lucy’ and her grandmother are as one:

‘Grandmother wore black obsidian,
even though the desert cracked beneath her feet.
The belt was carved from the upper delta
and an emerald stream ran down her back.’

By extension, Lucy and the grandmother figure become linked as the cipher, number one, mother of all. Saul’s poetry is concerned with shape-shifting and transformation, such as ‘Lotus-Woman’ and ‘Werehyena’, which is an Angela Carteresque narrative poem in which a blacksmith can change into a hyena, like his pet. Saul frames the story with the idea of telling it at a wedding, a nod to ‘The Ancient Mariner’.  The sea is present in the final poem, ‘Leaving Abyssinia’, a beautiful poem in which the speaker is surrounded by myths and legends recalling earlier voyages such as Odysseus’, and rich with sensuous descriptions of the surroundings.

A pivotal poem is ‘House of Blue’, placed dead centre of the 12 page selection. It is a many-layered poem which celebrates the power of music but is also about poetry, the making of it and the cultural influences which combine to inform it. Saul has not yet published a full collection, but I will certainly be looking out for one in the near future.

Dan Wyke’s  Spring Journal  is very different. This is a strength of Rack Press: that very diverse styles are placed together, informed by a taste for what is excellent rather than a desire to promote a particular style of poetry. Wyke’s pamphlet is a sequence of short but delicious poems taken from his notebook from last spring, presumably. Obviously these are edited and honed. I love short poems, little quotables that can be learned and digested quickly, displayed on posters, scattered through days like shells on a beach. There is wordplay and fun here:

‘The Buddha of suburbia
croaks
beneath the buddleia.’

Bird song, weather, light, nature, are threads which run through these delights, alongside what poetry is and why he writes. I love this perfect quatrain:

‘Blackbird, not very good at flying –
straight, low and long –
you have stayed in the park
and perfected your song.’

This is reminiscent of John Clare, but Wyke can give bird poems a modern twist, with his starling ‘overdosed on last night’s/left over hoi-sin’ and the blackbird’ ‘printing a row of continuation dots’. A poem for those with writer’s block which beautifully recalls A.E. Housman:

The second sequence, ‘Days of March’ brings in more of the poet’s everyday life, including love poems which are touching and funny, such as the one where he texts his loved one about vegetables:

‘Courgettes, aubergines and the humble swede
stand in for all the inarticulate power of my heart.’

This is a wonderful book to carry around on a journey. Each little perfect poem would give much to ponder on, as you look out of a train window. Anyone can enjoy these poems so buy one for the person who thinks poetry leaves them out. But for poets, the honesty of Wyke’s thoughts about writing are some of the most exquisite parts of this rich, beautifully formed yet undaunting book:

Martina Evans is an Irish novelist and poet. As soon as one begins to read her pamphlet, her Irishness shines out, not just in the subject matter but in the style. There is a bit of a raconteur about her, a smattering of music and wit. She doesn’t take herself seriously, which is obvious from the first poem, ‘Prizes’. She presents herself as endearingly cack-handed in her inability to handle the award ceremonies with style and grace. These are memory poems, soaked in detail, giving a fresh childlike view of schooldays and the powerlessness of children to get things right in the face of adult implacability. Many of the poems reference Bart Simpson:

‘Even Bart Simpson felt the shame,
Yellow and unreal as he was and
Everything distracted him but especially
the snowstorm that god sent – he slumped
slogging over a book while everyone
in Springfield linked arms in a circle
singing A Winter Wonderland.’
(‘Kept Back’)

She goes on to tell the reader how she came to be kept in a lower class because she loved reading stories. Because of this she was not allowed to make her first holy communion with the rest of the class, their ‘ring’ of white dresses contrasting with the bright clothes of the fairy tales she loved: Cinderella’s three dresses, blue and / pink and gold and roses’. The Bart Simpson reference is unlocked at the end, the white dresses, leaving her out of the circle, ‘white and crisp as a Winter Wonderland’.

The poems are carefully arranged to open up one from the other chronologically. I always enjoy the journey of collections which are assembled this way.  The injustice of a draconian school is a linking thread, as is growing up and having to help in the shop. The strongest link is the passion for reading, which is beautifully expressed in the closing poem, which recaptures the joys of a much loved book:

It’s Enid Blyton, of course, the Jacqueline Wilson of the fifties and sixties, whom we all devoured despite the disapproval of straight-laced teachers who thought they were not sufficiently ‘improving’.  The adult self is presented here as finally having the freedom to do as she wishes. Evans expresses the joy of discovering reading in a strong image:

’… the miracle
of the black marks straightening themselves
out into sense across the page,
saying this way, this way
you’ll escape.’

For all the suffering and unfair punishments the child suffered, this is a sequence full of subversive joy. It has so much in common with my own childhood that I would love to crack open a bottle with Evans and settle down for a right good natter. These poems are vivid, at times funny and at other times burning with injustice. 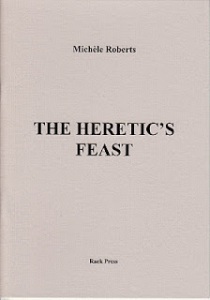 Michèle Roberts is also a novelist and much more widely known for her prowess in that area, so it is good to see that she can also write poetry that is at once spare and lush. A novelist’s love of storytelling drives the sequence, but these are personal pieces, about her mother, exploring in particular the shift from seeing one’s mother as all powerful, a saviour and a rock, to seeing her as someone childlike who needs care, then someone whose death one must come to terms with. The mother is Roberts’ ‘saint’, with ‘varnished gold toes’. She compares her mother to communion bread at mass in a perfectly description of a tabernacle:

‘You were the tabernacle
aproned in white brocade
God’s diet food. You hid
in the shuttered shrine.’

This image is developed later in the poem, when, fifty years later, her relationship with her mother changes and she sees her as more human, less divine:

‘Transfiguration: you reveal
your dazzling face
lean forward
into my listening
frightened you will fall.
I catch you on my tongue
and in my hands.’

Catholics believe that the host of unleavened bread becomes the body of Christ. Just as Christ is believed to enter the body of the communicant, Roberts is receiving the essence of her mother, a beautiful way to describe their sudden communication at what appears to be the deathbed of her father.

The last poem in the sequence picks up on this image but it has become sacrilegious:

‘Unholy communion: we separate you
Into black sacks
for paper, plastic, metal, wood
drive you to the dump
tip you over the edge of
boat-sized skips.’

Anyone who has had the experience of clearing out a loved one’s house after their death will tell you that is exactly how it feels, as though their unwanted possessions ARE somehow them. But there is a resolution which brings a new start:

‘And now your empty house
laid open, bare
fills up with light
gleams pearly as a half-shell
on wet sand under the running tide.’

This closing stanza completes the circle started in the first stanza: a memory of beachcombing as a child, finding treasure. The empty house is now full of possibility.  The poems in between are equally luscious: all poems about her mother’s absence in her life but written in a joyous celebratory way which brings into focus the way the child’s inner life remains tied to closeness with the mother, even when death has severed the physical contact.

These four pamphlets go beautifully together as a set, as well as each one standing confidently on its own ground. They are limited editions so you should hurry to acquire them. Rack Press has been shortlisted for the Michael Marks publishers award on the basis of last year’s pamphlets, and Denise Saul’s House of Blue from Rack Press is a Poetry Book Society Recommendation for Spring 2012. These accolades go to show that Rack Press pamphlets are starting to make their mark in the poetry world. 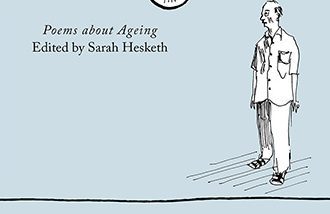 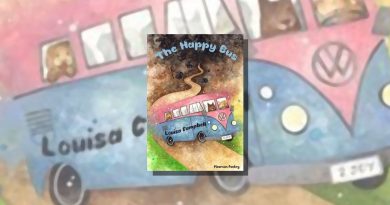 The Happy Bus by Louisa Campbell

September 24, 2019 Karen Goodwin Comments Off on The Happy Bus by Louisa Campbell