Last week we reviewed a selection of Edinburgh Previews from Tea Fuelled Arts. We enjoyed them so much that this week Sabotage’s Performance Editor James Webster, and plucky reviewer Dana Bubulj, are up in Edinburgh taking in the Fringe Festival. While they’re there, they are trying to review as much Spoken Word as they possibly can, as well as a few other things that catch their eye (and fall vaguely within our purview, e.g. no extreme basket-weaving)

Brought to the Fringe by Kudos Theatre, this show promised so much, but only sporadically delivered.

Seemingly vaguely inspired by a mish-mash of Shakespearean stories and Greek myth (definitely some Tempest, a little Twelfth Night, and some Perseus), the show also mixed in some contemporary social commentary, that could have been great if properly developed. Instead the plot was rushed and confused, the modern aspects (criticisms of the NHS’s attitudes to mental health and of rioters becoming looters) seemingly tacked on, while the various plot developments hurtled on at a pace too quick to explore any of them. There were some good ideas, but there was altogether too much dealt with too shallowly to make the audience care.

And the whole thing was written in clumsily rhyming cod-Shakespearean language that made me cringe at every horribly clunky rhyming couplet, the occasional moments of sparkling wit and genuine poeticism immediately swallowed by forced and hammy dialogue.

Some of the acting was decent, the clown (Clary) was ably played with humour and verve by Jim Badcock, while Samuel Nunes de Souza (Sigis) also did a capable job with what he was given. But the general standard was awkward and uncomfortable, the cast delivering their lines in far too stilted a fashion to rescue the script from its own clumsiness.

The biggest problem was that the show had just enough promise in its themes and ideas, that the delivery was a real let-down. With more drafting, development and a more polished cast (and less forced rhyme) this could have been a good show. But it wasn’t.

Written by London-based poet Sabrina Mahfouz (who we’ve reviewed before), this piece examined gender roles and sexual politics through the lens of a conversation between Marly, who works in an upmarket brothel, and her first customer, A.J.

There’s plenty of excellent banter, Mahfouz has a real talent for writing witty dialogue and clever exchanges of views that subtly explore attitudes towards sex and root out hypocrisies and double standards in common views on sexuality and sex workers. It’s a credit to the understanding of Mahfouz’s writing that A.J.’s repeated question: ‘Why do you do it?’ is portrayed as the judgemental and problematic question that it is, and Marly’s eventual answer is an excellent affirmation of why someone might choose to work in the sex industry.

There’s also a lot of funny lines stemming from the awkwardness and forced nature of the situation these two characters find themselves in (especially good is Marly’s forensic examination of A.J. and the mock university interview she gives him). A lot of this also stems from the pair’s shared interest and backgrounds: both North Londoners and both sharing the same problems of fitting into a multicultural Britain in their early lives (Marly, who’s Brazilian/Polish, professes how she used to pretend to be ‘straight English’ to fit in with the characters she saw on television). This common background came across with a great London lyricism, a youthful East-End cocky cadence that you seldom see in actual London theatres, too often dominated by stuffy middle class voices.

The play was effectively staged, intelligently acted and dealt with its themes with a superb lightness of touch. While the ‘prostitute and client bond and just have a chat’ narrative is one that’s familiar and slightly played out, the script and the actors do it very well and it was a very insightful microcosm of modern sexual/gender politics.

One Hour Only is on at the Underbelly at 5.20pm 2nd-26th of August (not 13th) as part of the Old Vic New Voices season, from Made From Scratch Theatre.

From Atlas Theatre: this story of two marionettes trapped in a decaying and abandoned puppet theatre, forced to play out the same stories night after night, was sweetly and bitterly tragic in the best fairytale tradition.

Through the overarching narrative of the puppets retrieving their lost memories and coming to terms with their lives without their ‘maker’ (puppeteer), they tell three gorgeously heart-breaking parables; morality tales designed to teach through tragedy. Of course the real tragedy is that there’s no-one to audience to listen and learn and so their repeated stories become a symbol for their fate, trapped in their own cyclical narrative.

It’s a lovely and forlorn show, the two puppets effectively played with childhood naivety and jerky, broken physicality (even if the flappy hand movements towards the beginning are a little overdone and distracting). The character of The Orator (a frightening kind of dark clown) was also very effective as a kind of narrator. Played with gruesome cheerfulness and psychotic energy, the character moved the play along nicely and also provided some moments of genuine empathy as his aggressively cheerful veneer gave way to surprising soulfulness. And I had to appreciate the way he effectively dealt with a giggly child in the front row, frightening him into silence, but also drawing him into the story.

It’s a great take on the spiky and unresolved kind of fairytales that should entrance and dismay audiences in the best of ways. Heartily recommended. 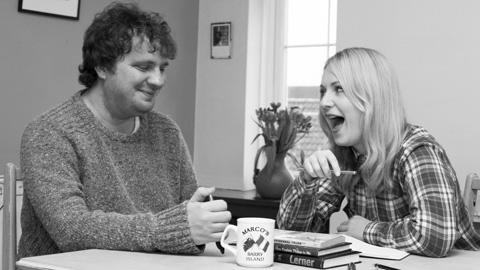 One thought on “Edinburgh Reviews Day 3: Dream/Life, One Hour Only and The Last Fairytale”