From Bag of Beans Productions, this was a stunning piece of one woman (with occasional instrumentation as background) spoken word/poetry/theatre, narrated, sung and performed by Aleshea Harris. Set in a “city of garbage heaps”, we follow a quiet girl grown up an outsider compelled by seeing some particularly great oration in the town centre very reminiscent of the civil rights rhetoric to find her own voice/magic. She does this with the help of another outcast, Sasha, an old woman suffering from the “disappearing disease” (an AIDS analogy) who used to be a Griot herself (“I was a tsarina of rhyme, a princess of powerful plosives”). The characters are compelling, with fantastic and distinct voices and mannerisms and the acting is brilliant, not to mention a wonderfully lyrical script.

It had some fantastic commentary on the process of finding a poetic voice, a process not for the faint-hearted, and the cathartic finding of expression that evolves from finding the “imperative” in life (rather than the simply “important”), writing and performing as separate steps does not make this piece a simple poetry version of training montage: it does not come easily, and the resolutions are painful but right and beautiful. The characters served as good contrasts to each other, particularly as the play progresses. Oddlie’s final soliloquy is a thing of beauty, dedicated to life, to poetry and to her friend that mustn’t be missed.

Rap is just a form of poetry, right?

Well, yeah, but there’s often reluctance on both sides of the Spoken Word/Hip-Hop divide who see poetry as stuffy or who look down on rap as ‘not proper art’, so it’s refreshing to hear Charlie Dupré point out the similarities between the forms (highlighting the similarity between 5-beat bars in rap and iambic pentameter) in this rap-infused poetic history lesson.

Dupré’s lyrically inventive re-imaginings of Shakespearean plays (and one Marlowe play) are really well done; his spitfire rhymes and rhythms make the theatre of the pieces come alive and give them a modern relevance. He teases out parallels between the subject matter of ‘Shakey P’ and modern hip-hop with a light touch, especially effective in his take on Othello (covering Eminem’s ‘Stan’), the classic tale of obsession, rivalry and sexual jealousy transferring very well to a hip-hop context.

There are some dips though: his takes on Much Ado and Macbeth are still good fun, but compared to his other pieces come across as a little prosaic, mainly just recounting the plot, albeit with excellent lyrics and interesting framing devices (Much Ado is done as a wedding speech, while Macbeth recalls all the decisions that led to his death in a clever take on causality).

But the rest of his material really lifts the show, from the amazing rap-battle between Shakespeare and Marlowe that is incredibly effective and hilarious in the way it recreates them as rival school MC’s, with amazing Shakespearean insults and theatre jokes (‘hate to break it to you mate, but no-one really rates The Jew of Malta), to his awe-inspiring take on Hamlet (where Hamlet’s madness is personified in an aggressive and cocky rapper-style voice, pouring lyrical fire into Hamlet’s ear), the show breathes life into these timeless tales.

Charlie Dupré presents: The Stories of Shakey P is on at 12.30pm at The Banshee Labyrinth, 4th-25th August

Dancing Brick’s ‘live comic book’ was part mime, part play, part comic book, part interactive theatre and a truly touching tale of loss and grief. Myself, I think of it as an ‘Unspoken Word’ show.

A slightly oblique take on the medieval poem of the same name by the Gawain Poet, the tale was told entirely by a silent character using narration, sound and cartoon from chunkily retro television set to tell his fractured narrative. He uses some really inventive and well timed physicality, hands disappearing behind the TV to be shown on screen, and an incredibly fun scene where he makes a sandwich on the screen.

He also used effective written instruction to lure the audience onstage, using them as characters in the narrative, and even converses with an audience member using dialogue on the screen (hilariously mismatched).

This funny and forlorn show may not be for everyone, the oddball silent character and disparate narrative could put a few off, but the audience on the day found it enchanting and heartbreaking and I couldn’t agree more.

Today’s Other Voices had:

Fay Roberts in her absolute element with a gorgeously sensuous poem to a mermaid lover, for whom she’d “turn sailor”. It had some lovely imagery, such as casting nets to “catch the moonlight” and the rhythm of the sea that throws itself again and again; this was a delight. Her later poem ‘Thanatos and Eros’ was a fabulous short lesson in the difficulties of various insults to carve into a car in runes and her last, ‘Dedication’, on struggling with queer stereotypes and finding her “own colours” was a nice way to address lesbian culture.

Sarah Thomasin had a great take on David Starkey’s racist comments on the riots with ‘Mind Your Language’, with some nice commentary on the evolution of spoken word (“language RIP as we RP”). ‘Going Nowhere’ was another nice take on community dialect (cab drivers using transport metaphors) that sadly fell for easy jokes (“friends all had ride [on bus/girlfriend]”). Her ‘Stand off at Cashpoint’, with yells of “Withdraw!” was a cute modern Western. ‘Normal’ was another similarly simplistic subversion: where the dysfunctional families were not as “strange” as families where people could be trusted. She ended on a battle rap response to defend her fondness for poetic structure, in a witty reminder that raps are forms too, despite people’s aversion to learning at school as it wasn’t cool.

Alison Brumfitt had some comic poems that could have been a bit more fluid. She had an exuberantly filthy take on chocolate vs sex (where she’d “rather have a shag”) and a serious point on the absurdity of sex-ed classes both coming too late and with no focus on mental health, coupled with the useless analogy of condoms on brooms (whose constant rigidity make poor stand-ins). Unfortunately, the point of emotional wellbeing/healthy relationships was lost in the advice on having “shagged a nutter” (sigh). Her other poem had the strongest content, although was a bit stumbly. It took on gender stereotypes and their use solely as creating insecurity and thus markets for advertisers, calling on us to truly own our own body.

Mika Coco argued that any music/poetry was effective (be it “Dylan or Bieber”) if it reached people and elicited emotions. That said, his introduction was somewhat offensive (and against the event’s raison-d’etre) and as such, didn’t endear himself to me (or the audience).

Chella Quint finished the night with a Sesame Street style sex ed song on menstruation, with a trip through the cycle that included “they float on your vagina on a RIVER OF BLOOD” in the chorus. Just a bit cheering.

And some familiar voices:

For the occasion, Harry Baker performed his Man Poem on traditional masculinity and James Webster‘s somewhat primal love story ‘Long Ago’ suited the catacomb venue. Lucy Ayrton‘s ‘Fuck You Corporate Land’ was appropriately full of repressed frustration, ‘Al is not really a Vegetarian’ was sad about nice mackerel being dead and Tarquin (from her show) is still a great set piece.

Performers Star Rating: 3/5 for a mixed bag, but certainly a fun event.

Other Voices: Alternative Spoken Word Cabaret is on at 2.50pm at the Banshee Labyrinth from 9th-25th August (not Wednesdays) 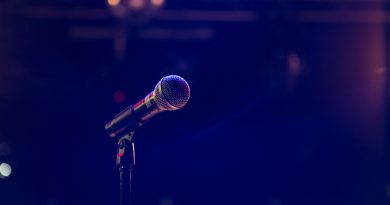