Víctor Terán is a Mexican poet who writes in his native Zapotec, a minority language of the isthmus of Tehuantepec, the narrow strip of lowland that divides the Pacific from the Gulf of Mexico. This chapbook of his poems appears with the original – and unpronounceable – Zapotec on the left, and English on the right, of every page, thanks to David Shook, the translator, and editor of Molossus, who grew up in Mexico. The book’s title simply means ‘Poems’.

I’m reminded of Pablo Neruda in a bitter mood.  The poems are about lost love and betrayal, and the long free verse poems with short lines owe something to Neruda’s laconic and confessional style. There’s also a dry wit in these pages, which Shook, in his introduction, calls ‘the poetry of bathos’. There are times it teeters on the edge of the sentimental, but somehow regains its balance just in time.

In ‘From the Palm of my Hand’ Terán acknowledges his melancholy:

Nostalgia has hung
its hammock in my heart
and my grudges
hastily sharpen their weapons.

The chapbook is full of these delightful twists of image when describing the poet’s emotions. In ‘Your name’ he says he has ‘the thorn of your name / nailed to the tip of my finger’.  Over and over he vows not to be laid low by his lover’s betrayal. In ‘You Will Not Manage to Hurt Me’ he tries to convince himself that his memories make him happy: ‘The cathedral of light that you left me is immense, warm and joyful’.

The themes are universal, but sometimes we are reminded that this landscape is the Americas.  Love, Terán tells us, ‘is wild honey that seeps from a tree, / sap of tender maize-cob generous at dawn’ (‘Six Variations of Love’).  In the opening poem ‘the North Wind whips’ he sets the scene in an isthmus village:

Houses moan,
Dogs curl into balls.
There is something in the afternoon’s finger,
a catfish spine,
a rusty nail.

For a feel of the Zapotec language, here are those lines in the original:

Shook warns us that Zapotec is being displaced by Spanish in the whole of Tehuantepec, and tells us:

When this stage of language attrition is reached, nostalgia-drenched poetries
often writhe in overt politics or accounts of their romanticised demise.

Terán avoids this trap.  His style is graceful and vivid, his subjects compellingly familiar. I was glad of this introduction to his work, and I hope we hear more from him via Shook’s poised translations into English.

Diidxadó by Víctor Terán, translated by David Shook, is available from the Poetry Translation centre for £4.00. 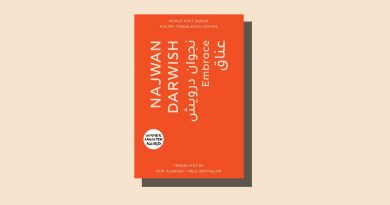 January 13, 2021 Karen Goodwin Comments Off on Embrace by Najwan Darwish

One thought on “‘Diidxadó’ by Víctor Terán”