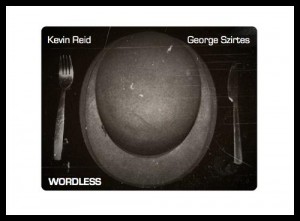 It takes a quirky kind of mind for a poet to decide, for National Poetry Writing Month, not to write a poem every day, but to take a photograph. Dundee-based poet Kevin Reid began his visual poems online, creating a silent dialogue between two ‘characters’; a black bowler hat, and a white mask. One, or more often both, of our delightful duo, appeared each day in a new situation; on a beach; on a park bench; in a phone box; in bed. After a few days of the project, another poet, George Szirtes, was asked if he could provide some commentary to the photographs – giving words to the Wordless.

The collaboration became a blog and, ultimately, became print, as a little book of photographs and text from Alec Newman’s Knives, Forks and Spoons Press. The book is A5, in black and white, with the pictures on the left hand page, sometimes a little scratchy, like a print from an early photograph. The text, on the right, is set out white on black, like the intertitles from a silent movie.

The monochrome protagonists in their monochrome universe are splendidly surreal. One can’t help looking at them in opposition to each other. Are they life and death? Husband and wife? Good and evil? They seem to be all of these things, depending on context. It is also interesting to note that putting a mask or a hat on an object instantly personifies it. Placing the hat on top of a toilet cistern turns the bowl into a surprised open mouth: ‘We are always being surprised at our ablutions,’ Szirtes writes in that case. ‘Look at this open mouth. Look at my hat. / Have you ever seen anything more surprised?’ Sometimes the mask itself wears a mask, giving it another layer of meaning. One thing to notice is that the mask never actually wears the hat; they are always separate.

George Szirtes is well-known for his short, gnomic lines of poetry. He must be Britain’s most prolific poetry tweeter. His saga Langoustine (Miel Press, 2013) began as a series of tweets, and at the moment you can follow the philosophical conversations of Child Helga and her father on his twitter timeline. His contribution to Wordless is typically absurdist, and humorously over the top. The two characters appear on a crumbling wall, and the little poem reflects their deep melancholy:

You leave me. I am less than my own face.
I am the cracked skin you leave me with. I am my black heart.

The hat and mask recline on the pillows of a white bed, dozing convincingly. This is an occasion for the man : woman opposition:

I could not tell her, nor could she tell me.
We were drowning in sheets.
We had nothing to go on, so we slept,
or pretended to be sleeping.

There are thirty photo-poems in this little book. It’s slight, and amusing, and ephemeral. But it will make you think about the visual cues we use to decipher our world, about the symbolism we use to tell stories, and about the relationships between objects. I’m reminded of those two Magritte paintings, Man in the Bowler Hat and The Son of Man. Perhaps Szirtes’ pithy captions are too short to really be poems, and if you read them all as one text there’s no coherent narrative, but Kevin Reid’s photographs do wrap them together in a very satisfying way.