It seems a fair assessment that with the ever-growing levels of multi-cultural inhabitants that are housed by the United Kingdom, conflict amongst UK cultures is, some would argue inevitably, also seeing an increase. Years of immigration and integration have effectively blurred the lines surrounding the question of what cultural groups, or more specifically, which members from cultural groups, can now be termed ‘British’. Rather than racism softening towards those who have resided in this country for an extremely long period of time, it seems that the EDL attitude, if I may be so bold as to employ that term, transcends these considerations and, rather than allowing acceptance of those who have been a resident of the United Kingdom for some time, all this seems to do is spark more confusion and frustration; two states that are made particularly apparent thanks to the increased media coverage that exposes them. It would appear that, like so many other issues, racism is fast becoming more dominant within our society simply because of the attention that is now being showered upon it.

Given how prominent these ideas and topics are within not just the media and such like, but also in our actual lives, it comes as no surprise that writers are turning to literature to address this downwards spiral of discrimination.

In T. A. Wingfield’s recent publication, Anytime Return, we are taken on a journey littered with racism and harsh realisations for many of the characters, that offers an intriguing representation of life in today’s society.

The plotline of the tale is reasonably simple: we travel alongside young Declan Skinner, who seems to be entirely dominated by the over-bearing opinions of his father, who identifies himself as a member of the English Defence League. The creatively constructed pages follow their journey to Leicester, where Declan fraternises with brother Jason, who fails to meet their father’s approval for a number of reasons.

During this time, when Declan is not only reunited with his brother but is also introduced to his brother‘s multi-cultural friendship group, Declan begins to reassess the foundations on which his ideas and principles are built. This twist of events allows a personal revelation to occur within the character of Declan, forcing him to alter his perceptions of things and ultimately paving the way for an empowering end to this tale.

Not only is the plot itself extremely though-provoking, but the presentation within this short piece is also outstanding. Somewhere between prose and poetry, each page exhibits Wingfield’s clever manipulation of structure to complement elements of the tale, with each page providing something visually new. The occasionally hard-to-follow structure is perfectly suited to the goings-on within the text and there is more than one occasion when the presentation of the literature seems to directly mimic that which is being described, which is fascinating from both a literary and artistic perspective.

Interestingly, the pages themselves are not the only unique element of presentation, with the whole text being physically produced in an alien manner. The book is introduced with the disclaimer: ‘The publisher recommends the reader only reads the ‘lower’ page, turning the book when they get to the end.’ This seemingly strange advice becomes perfectly logical upon realising that these pages are not to be read in the typical manner in which one would usually read a book; this is something that will become clearer upon obtaining a hard copy of the text, which, by the way, I fully recommend. 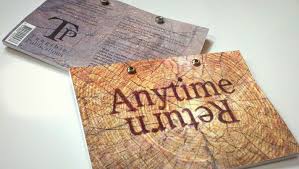 Anytime Return may be a short read, but it certainly packs something of a punch on the unsuspecting reader. Wingfield has created a brutally honest presentation of elements of the United Kingdom, and the variety of people that now reside within the country, and, for anyone interested in the current state of conflict that exists between these cultures, this book would be a worthwhile purchase. Despite my initial reservations, many of which were tied to the unfamiliar presentation of the text, Anytime Return was actually a true pleasure to read and I would indeed recommend this book to others looking for literature that opens both the eyes and the mind.

Anytime Return is a short but hard-hitting read that is a startling but brilliant reflection on the attitude held by those who brand themselves as real Britons, towards those who now inhabit the United Kingdom alongside them.