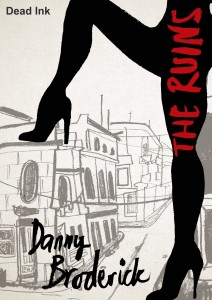 Published as a Kindle Single on Amazon by Dead Ink, Danny Broderick’s The Ruins is a short story whose impact primarily derives from how it subverts the reader’s expectations regarding certain storytelling genres. The narrative begins in media res as a sort of spy thriller: ‘The woman was stripping the prisoner, tying him to a chair’. Already though, little details in the language prime the reader to expect a twist somewhere. Talk of ‘Fanatics’ gives way to a focus on how the prisoner ‘stretched his muscled body against the rope’ and the sexual frisson of how ‘the hard spike of [the woman’s] heels scrap[ed] concrete as she opened [the door].’

Although The Ruins quickly establishes Estrella up as a compelling character, the problem is that the rest of the story then essentially continues to dwell on the fantasy scenario and how it plays out, as Estrella does her job and escalates the violence against her client, climaxing in her carving her name into his skin with a blade. Granted, through the intermittent conversations that Estrella and Paco have, there are suggestions that the portrayal of the transactional relationship with the prisoner is to be interpreted as a form of social commentary:

‘“The dreams you had and the plans you made are all dead,” she told him. “Gone with the collapse of the new city you thought they were building around you. So you have only what you have and must make your life here. In these empty ruins. The world did not transform itself around you. Your bar never did miraculously relocate itself to the centre of a new world. And what do you have? The poor workers, the unemployed, the drunks and hustlers. Who you tried to move on in anticipation, who you denied entry to, and who are now back through the door.”’

At the same time, there are issues of power and control at stake here. When Paco tells Estrella, ‘Give him his victory. It’s a game’, she counters that ‘it’s more than a game’, insisting that she is no ‘whore for hire’. However, given the space of a short story, there is perhaps also too much going on, thematically speaking. (It is hard to avoid seeing the Spanish setting of the story as yet another intentional level of meaning being encoded.) This is not really intended as criticism—since The Ruins is an intriguing piece of fiction in itself—so much as an observation that Broderick’s layered storytelling might be even better served by allowing the story more breathing room, given how its internal genre shifts already successfully confound preconceived notions of how the narrative should play out.

‘The Monster Opera’ by Nancy Stohlman