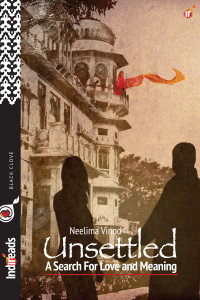 Unsettled is a novella from the Indimyth category of Indireads, a collective of South Asian authors writing fiction depicting modern day struggles between heritage and the burgeoning economic, Western-influenced values in contemporary South Asia.

The novella interweaves the stories of Divya and Raghav, a married middle class professional couple in modern day Mumbai with Shankara and Thathri, lovers from an ancient tale told by Divya’s grandmother. The former are in an emotional inertia, hiding from each other behind work and social media, the latter are thrown together in magical yet doomed circumstances.

The exploration of the link between the couples begins when Divya meets Dr Ray, a mysterious marriage counsellor, Divya describes him as: ‘a real yogi, his silver hair wrapped in a black turban, large opals and amethysts on his rings, a man with the magic touch.’

Dr Ray encourages her to look inwards to find the root of the problem and in doing so unlocks knowledge in the form of a poem from Divya’s subconscious which she presents to Dr Ray on their second meeting:

‘Do you know what loneliness is?
It’s the cracking of the bone and the hungry fire burning you from
within – for what else can fire do but burn?’.

The mysterious Dr Ray probes further into Divya’s past; Divya relates a story set five centuries in the past told by her grandmother during childhood holidays in Cherakad, South Kerala, about a mysterious cursed ‘big house’, the story of Shankara, a banished poet and Thathri who is cursed as a yakshi because she would not conform to her fate of never finding true love. Shankara writes sets of poetry known the ‘scrolls of love’ whilst he is under the seductive spell of Thathri. Upon hearing this section of the tale, Dr Ray tells Divya that she and Raghav must go there and retrieve the scrolls to save their ailing marriage. Of course, Raghav thinks it’s a wild goose chase but goes to the ‘big house’ anyway and there, the threads which tie the two couples via a supernatural link are exposed.

I must admit when I read the first chapter the first time around (I took a break and picked it up again a few weeks later) I got a bit impatient with it (who wants to read about couples therapy?), but by the time I read the poetry in Chapter 3, suddenly the story opened up for me and I began to notice Vinod’s description of space, noise, smells and fate. The scent of Jasmine and its association with seduction, the wall of sound as one steps out of a house in Mumbai and how fate plays out in such a packed urban environment:

Vinod certainly writes in a subtle, seductive manner, describing all five senses to the reader whilst weaving her tale in a magical slight of hand, it is believable.

Unsettled is indeed about the search for love and meaning, but not the type of Disney junk fairytale happily-ever-after stuff, it explores real connections between people, the influence of technology on modern day relationships, the blending of heritage and the contemporary in modern South Asian life. Vinod presents two truths in the story in a magical and empowering way (at least to me as a white, Western reader), she exposes romantic heartbreak for what it is, lust lost and the hard lesson that fairytale inspired ‘true love’ isn’t meant for all of us and that we should take a look around at the love that already surrounds us.