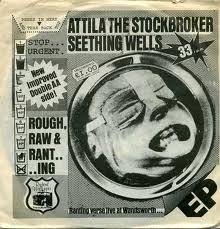 -In Conversation with Tim Wells about his Ranting Project-

I did a separate couple of interviews last year for creative writing students who kept asking me about the influence of hip hop on my poetry. One of them was non-plussed by answer that there isn’t any, and the other chose to ignore it. The fact that I was writing and gigging, spoken word gigs at that, before hip hop, was a source of amazement to one and did not compute with the other.

That then got me to thinking why the genre and generation of poetry, Ranting Verse, that I started gigging with is so little known by the young people. The Roundhouse Collective has hip-hoppers ten a penny, indeterminate hip-hoppers at that, but nary a ranter.

It became apparent that my generation was too new to be history and yet was before the interweb. Not being on the interweb is commensurate with being invisible these days.

Discussion on this led me to being funded by Arts Council England to research ranting verse with a view towards an exhibition and some gigs. Money to research my youth? Sweet!

I’ve always laughed at bloggers, all that earnest, ill-informed opinion. So it pained me somewhat to become one myself. I’ve been blogging my research but have mainly avoided half-baked opinion by letting the old interviews from ‘zines and music papers, poems, and flyers speak for themselves. Rant for themselves even.

I’ve been collating material from people I gigged with, poets I admired and some of the historical context that fed into ranting. I’ve been to libraries, museums and persuaded friends to look under their beds and at the bottom of their wardrobes for the old papers and ‘zines we’ve been hoarding from the 80s.

Ranting burst pimplelike onto the face of poetry in the early 80s. The best known names were Seething Wells, Attila the Stockbroker and Joolz. As important were poets like Linton Kwesi Johnston and Michael Smith. Whilst ‘dub poetry’ is often nowadays seen as a separate thing, at the time we were all gigging together. One particular area of interest to me is why young people gravitate to an American form like hip hop, when reggae was such a huge part of British life to people of my generation. Reggae for me is a newspaper whereas hip-hop is a shopping list. I’ve yet to draw the conclusions but the blog is starting to form both questions and answers as more and more material is added.

Nowadays interviews are on the interweb and can be viewed by everyone. It’s apparent that pre-interweb ‘zines took the place of a more direct voice. The music press interviewed poets like LKJ and Attila (yes, poets on the front of the national music press)! In the papers the poets talk the talk but it’s in the smaller, more localised ‘zines that the interviewees really shout the odds. It’s a layer of expression and insight that I think we’ve largely lost for fear of scrutiny.

Several younger readers have told me they’re surprised at how much the ranters did. There are the press interviews, national TV appearances (we had 4 TV channels in those days) and gigs with major bands, and gigs, gigs, gigs.

This leads to the claim that the following generation of poets, the ‘performance poets’, made that they were taking poetry back to the people look like the empty boast it was. The poetry was already with the people. What had changed between the ranters and the ‘performance poets’ was that arts administrators had grabbed poetry and put themselves in the line to get paid. It wouldn’t be a Tim Wells piece without some mention of class, now would it?

The blog is still being added to and I’m still researching material. Favourites so far for me have been Michael Smith, he was such an inspiration to us before he was horribly murdered, and a ‘zine interview with me that I have no recollection of.

The name of the blog comes from a song by the Members, one of the reggae loving punk bands that caught the mood of the times so well. They’re also a band that myself and Porky the Poet used to go see frequently. These days Members singer Nicky Tesco comes to our gigs.

There’s lots more to come, reminiscences, old interviews, poems and rare clips of the original ranters, as well as the poets that inspired us.

Please have a butcher’s: http://standupandspit.wordpress.com