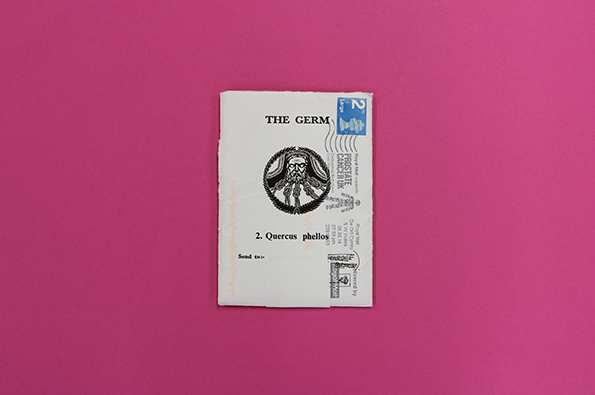 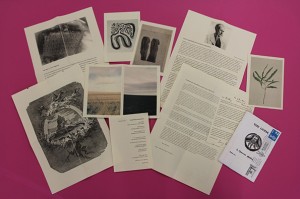 The original Germ was an organ of the Pre-Raphaelite Brotherhood. Subtitled ‘Thoughts towards Nature in Poetry, Literature and Art’, the journal featured poetry by the Rossettis and others, as well as essays on art and writing by members and friends of the Brotherhood. The first issue appeared in 1850 but the venture was not a commercial success and after four issues The Germ closed for business.

This new Germ, which is a self-conscious homage to the original, has already reached its second number. Each one consists of a small packet of delights; set of loose folded A4/A5 or unfolded A6 sheets, on nice quality paper, with photographs, drawings and text set in crisp, elegant Baskerville type and posted in an envelope featuring a unique woodcut by Duncan Montgomery. The contents hover around the PRB’s subtitle ‘thoughts towards nature and art in literature’. It apparently has no website, and the editor appears to favour proper post, although an e-mail address is provided.

Each of these issues might be described as somewhat thematic. The first is dominated by flowers and gardening, with a short essay by Lettice Franklin on gardens in literary Modernism and another by George Williams on the quest for the elusive hybrid yellow-flowered magnolia, along with a rather splendid photograph. A third essay by Henry Buckoke, with a suitably Alice in Wonderland illustration by Harriet Bruce, discusses John Cage’s interest in mushrooms, those odd blooms of darkness, and draws some interesting parallels between mycological fieldwork and the composer’s compositional methodologies.

In the second number, the garden theme takes a new direction, with Jamie Curtis-Hayward’s essay on wild gardens and George Howard’s introduction to Ian Hamilton Finlay’s Little Sparta. These essays circle around ideas of chance and engagement that echo in a second note on Cage by Buckoke. This time he writes about Child of Tree, a work that utilises plants as instruments and indeterminacy as the main organisational principle. Cage is an important artist but his work often elicits the most convoluted of critical responses. Buckoke writes about him with an ease and clarity that bodes well for what I hope will be an ongoing series of essays.

Both issues also include interesting notes on plants (apparently a Herbal in progress), accounts of nature myths, visuals and poems. These last are, on the whole, the least interesting of aspect of The Germ to date. For the most part they are a little too close to Pre-Raphaelite models for my taste, with the exception of a fine piece by Rowan Evans called ‘A Method, A Path’ which uses the full A4 format interestingly.

But despite this minor cavil, this new Germ is everything you could ask from a pocket-sized literary/arts magazine and I can only hope it flourishes for longer than its predecessor did. The focus on the PRB’s subtitle, and as ecological crises pile up around us, is even more crucial now than it was 160 years ago. Any forum that raises these questions, especially in a non-didactic manner, is both timely and welcome. For this reason alone I’d have to hope that The Germ manages to live long and prosper. The fact that it’s a pleasure to read reinforces my hope.