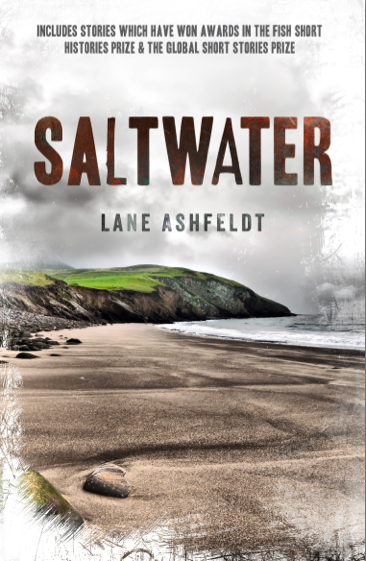 Published by Liberties Press, an Irish, independent publisher, Saltwater is Lane Ashfeldt’s debut collection of short stories. Around 160 pages long, the stories share a focus upon the relationship between the individual and the sea, although the settings vary from Greek islands, New Zealand, Ireland, and southern England, amongst others. The collection is divided into three sections: ‘Roaring Water’, ‘Slack Water’, ‘Rising Sea Level’, and the stories in each part address human issues and events emblemised by such sectional descriptions. In ‘Roaring Water’, characters are overwhelmed – or threatened with being overwhelmed – by the sea; in ‘Slack Water’, men and women seem to take a breath, pausing in their current life before taking off in a new direction; finally, in ‘Rising Sea Level’, the pressures of life and creeping water threaten to engulf those living the stories. 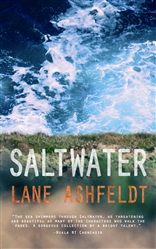 By immersing her stories and characters in the sea, and by shaping her narrative to reflect the changing power of water, Ashfeldt employs an overt and potentially problematic motif. Handled less dexterously, the recourse to descriptions of the sea and of moving water might read as repetitive. Ashfeldt avoids such pifalls: in her strongest stories, the sea features prominently and is a present, influential part of her characters’ lives. This is effectively borne out in the first two, interlinked stories, where sisters are separated by a shipwreck that only the youngest survives:

[a] splash, a shock of cold, a numbing blackness. And the quietness of it, like she’ll never hear anything again. Then the thumpety-thump of the blood in her veins. Nola’s chest tightens. Her mouth opens and air bubbles gallop past her ears and break on the surface. Her face follows and water hisses out of her ears. From above, a barrage of men’s shouts cancel each other out.

In ‘SaltWater’, the second story, Nola’s now adult fear of the sea – caused by the shipwreck that claimed her sister, Elizabeth – has an insidious, understated impact upon her life. ‘The accident still upset her’, to the extent that she does not swim with her children on a day trip, until she is forced to enter the water when her child gets into difficulties. The rhythm of the sea is entrenched in these stories, beyond the descriptive passages; there is an easy flow of perspectives, from Nola, to her sister Elizabeth, to Nola again, to her husband.

‘Dancing on Canvey’ is a touching fictionalisation of the flooding experienced on Canvey Island in 1953, which claimed fifty-eight lives. Ashfeldt depicts a burgeoning, swelling attraction between two youngsters, little more than children, setting it against the destruction caused by the flood. Again, the sea mirrors the experiences and emotions of the characters. For example, the narrator’s maturing, changing perspective is signalled by her altering view of the water surrounding her home:

It’s weird if you think about it, this island that’s not really an island anymore with its tall grassy banks to hold it in place. Even now with the tide not fully in, if the sea were level both sides of the wall it would lap at Archie’s shoulders. Maybe his nose, even. Not that you do stop to think of it normally, it’s just this thing we’ve been doing in art has it all fresh in my head.

Later, when she and her brother Archie are rescued from the water by Johnny, the object of her growing romantic interest, they are taken to a collection centre where the talk turns to how many people perished in the flood: ‘numbers ebb and flow: how strong the wind, how high the waves, how many dead this town, how many that’. This is a lovely story and won the Fish Short Histories Prize.

Ashfeldt is skilled at linking internal discord with the external environment, positioning the sea as a metaphorical representation of inner turmoil or transition. In ‘Freshwater Habitat’, a pompous man returns to Ireland for a friend’s wedding, bringing Aoi, his aloof Japanese girlfriend, with him. Conleth is troubled by the relationship: his ‘fluctuations’ and inner discord are linked to her distance and his concern about how to manage the relationship. In their hotel room, Aoi is set apart from him, ‘adrift in an ocean of crumpled linen’. The return to water in describing relationships is similarly employed in ‘Sound Waves’, where Shay, a young man, attends a music festival and meets the daughter of a fading (female) rock star. The festival affords Shay the opportunity to broaden his horizons and move beyond the sphere of boyhood:

Ellie, Matt and himself leave for the festival early on the Thursday. The train is like any train, but when they board the boat to the island and are surrounded by other festival-goers, there’s a real sense of anticipation. The sea is calm, the water flat. Too flat almost, but then this is only a strait — the real sea is on the far side of the island. The wild side. As he watches the mainland recede, Shay has the feeling they are leaving reality behind. The festival is another world, a world of games and music and dressing up. A place where anything can happen.

‘Freshwater Habitat’ and ‘Sound Waves’ are strong stories and the characters are convincingly drawn; Conleth interprets life through the prism of money and is annoyingly humourless, and Shay and Carlita’s brief love affair is tenderly drawn. However, the power of Ashfeldt’s collection lies in her portrayal of the sea as a living, fierce companion, stepping centrally into the narrative and living alongside the characters. For me, it is these stories that really shine in Saltwater, with the sea taking on a real, elemental and vital role in the lives of characters.