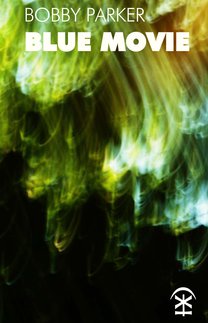 Bobby Parker’s Blue Movie is a beautifully intense study of the brutality of love executed in a series of long narrative poems that effectively utilize atmosphere and imagery to draw the reader into a world that, while painful, shimmers with the raw and bloody loveliness of truth. This biographical collection is psychologically interesting. Details of childhood abuse, while not blatantly stated, lay the groundwork for understanding and (uncomfortably) inhabiting a drug-dependant recent past.

The trauma the speaker experienced is introduced slowly and subtly in the lyrical ‘Factory Spirit’, through the device of a father and son struggling to communicate:

He tells you that he drifts through the old
buildings every night, talking to the dark, until it’s time
to go home. And for some reason it reminds you of love,
I mean it seems like your dad is talking about love.

Parker is at his best when delivering a narrative; his major gifts are in imparting story, rhythm and mood. This is a book that the reader inhabits, even when doing so becomes deeply uncomfortable.

Parker does not shy away from vulnerable embarrassment. The sensitive, observant boy in ‘Factory Spirit’ grows into a seemingly immature, aggressively clownish adult balking at premarital counselling by pretending to be invisible in ‘H.G. Wells’:

The vicar came round to talk about
the wedding. I ruffled his hair, twisted
his nipples and filled the room with phantom
laughter. Happy as a ghost I opened his bag,
found a soggy sandwich and slapped
his cheek with a piece of salami.
‘Are you sure?’ He asked. She took a deep
breath and nodded. He sighed.

This kind of writing takes courage. It is incredibly difficult to draw an honest portrait of yourself, as you were or are, and the vicarious pain the reader experiences is heightened, not lessened, when Parker presents us with the reason that the reluctant groom has frozen, emotionally, at the age of twelve. The poem ‘The Other Boys’ contains a great and terrible beauty:

I told her about the other boys,
the sharp voice under my ribs,
how my head is stuck in lesser moments.
I told mum what touched me
as her mouth wobbled through hot tea:

‘Signs of the Son’ depicts the long-term effects of trauma, the permanence of it, and the way that it lodges (for decades) in the space between the ears, ‘The furniture in my head is old / and broken. Some of it isn’t mine.’ And the unfortunately titled ‘Heartbreak Delirium’ provides a very nice example of the kind of dream that comes with PTSD:

The first dream tells me
sex is a lake full of lost hooks
and headless toys.

This collection is not perfect. There are a few too many poems about the struggle of writing poetry (though as a fellow rape-victim I can only applaud the impulse to use wounds as inkwells – especially when the work is so well done) and a few of the poems could have used a little paring down, but overall this collection is remarkably strong. You won’t find a single cliché, answer, or easy image here. This is not pretty poetry. There’s nothing ‘nice’ about it. It’s brutal, honest, and startlingly good.