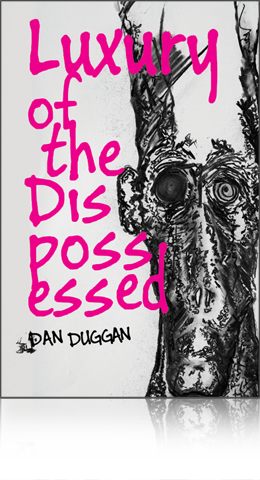 If a book of poetry leaves you totally unchanged – if you think ‘that’s a good image’ while reading, but the poems all seem to blur together five minutes after you’ve turned the last page – the book is ultimately a failure. Unfortunately, the current culture seems to produce a great many books that meet that description. They cover safe topics – historical events the poet never experienced, bad sex, middle-class awkwardness – they have a very deliberate, soulless music, and the lines all end on ‘interesting’ words. The world is flooded with inoffensive mediocrities that seem to drown the brutal blade of beauty in a scrim of dull (and dulling) rust. Luxury of the Dispossessed, Dan Duggan’s cutting first collection, is the antidote to every book that meets the above description. It is the cure for easy, unimportant work. This book blazes with the harsh fire of truth, and the poems in it will linger in your mind long after you’ve finished your first reading.

The collection treats the poet’s experience as a mental patient held in various psychiatric wards under the provision of the 1983 Mental Health Act. As you might expect, these poems can be difficult to read in places, in terms of emotional investment. They are bright and clear as new mirrors. Sympathy swells at the suffering of the poet and his fellow patients. ‘A Police State (on failing suicide)’ plunges the reader into the world of someone driven to self-extinguishing extremes by his own broken brain:

They see the knife in the
chest, attempting to nail love down
but missing by inches and puncturing
a lung.

There is no self-pity here. If anything, the description of the author’s attempt to take his own life is dissociative, detached, as though the writer were describing a well-executed (but disturbing) painting hanging in a white-walled gallery. The poet turns the same lens on others that he uses on himself, capturing character with incisive insight and a fine eye (and nose) for detail. Describing the paramedics that rescued him against his will, Duggan says:

They have a smell about them these
people, common sense and alcohol
in very equal measures.
They have a rounding beyond your view
right now. They are the ones who will pull
you back into yourself, kicking
and screaming.

Although the subject matter is terrible (in the old sense, ‘causing terror’), the poems are a delight to read. Such is the writer’s skill that a poem about wanting to die dances the eye down the page with the implacable ecstasy of a bar-song. ‘Dress Rehearsal (following a failed suicide attempt)’ uses internal rhyme to soften the brutal blow:

Chased by security guards around the foyer
of the Royal London Free, in a surgical
gown that didn’t fit me, all the flowers
were out, even the dead ones brought
colour to someone’s cheeks, I couldn’t
recollect, it had been weeks. I had a desire
to go under a bus, where even if the impact
didn’t kill you, you’d be drawled on like
a soft flint in summer. They got me back
upstairs, I filched the scissors from the apron
of a sister, they let me use a stall alone.

I could write essays about the themes explored in this book – the anorexic’s need for control, the urges behind suicidal desire, the hidden dangers of recovery, the vital importance of small acts of human kindness – but that would leave little time to describe another important aspect of this book. Duggan is an artist as well as a poet. and the poems are interspersed with frightening, abstracted ink-based self-portraits in a style resembling the twitchy, self-aware work of Egon Schiele, if that artist had worked while under the reality-warping influence of antipsychotics. Self-portraits are very revealing; their execution requires a cool, clear eye and unflinching honesty. The artist is telling himself, honestly, who he is. Such bravery is amazing, and it abounds in this book. Duggan makes a subtle song of pain, and how it sings.