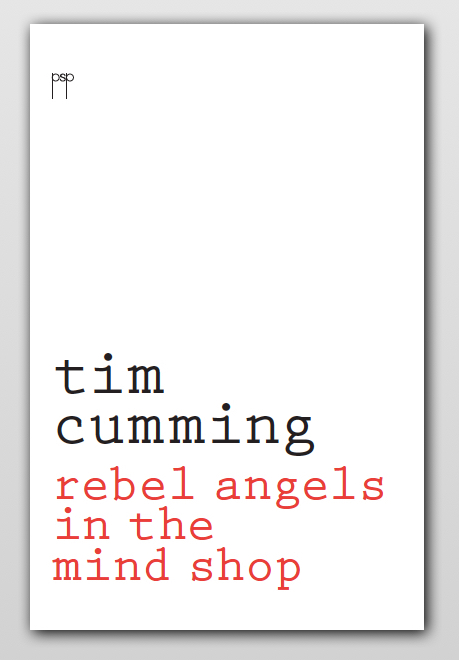 Tim Cumming’s Rebel Angels In The Mind Shop is a perfectly tuned artifice of image and music, focussing on mythic synchronicities that surface through the (sometimes rough) skin of everyday life, clad in the thin guise of chance. The title comes from a book (Robertson Davies’ tarot-based novel The Rebel Angels) and the shop in which the author spied it in 1973, after buying a new pair of jeans. This book’s smallest part reflects the substance of the whole; old and new, ancient, arcane, and the painfully modern, rub shoulders and trade paint with the force of their friction. In the introduction, Cumming tells us:

today, at Treadwells, there on a seat in front of the Mediaeval literature section, with the Confession of Isobel Gowdie sticking out from the shelf like a rude tongue, I saw Oral Folk Tales of Wessex by Kingsley Palmer. 1973, a year I like – it’s got a nine, a seven, a three and a one in it, all powerful numbers. And now I must stop and tie my laces.

That’s the kind of book this is, in microcosm; academic riffs, medieval numerology, and seemingly banal minutiae mixed together and served up in precise, cool lines reminiscent of the kind of talk you’d have late at night in a book-lined, incense-scented room where everyone is sparkling, intelligent, and at least a little buzzed.

Much of this book is focused on the passage of time; the way it seems to behave in memory and fact. Sometimes, as in ‘Time Lapse’, it seems to slow down. Every instant freezes and expands until details take up the whole picture and the world seems suddenly strange:

just a change in the angle of the head
may show each one of us dancing alone
through the air, but who knows what
we say or what we’re doing there
unless you stop us and turn us over.

As in Davies’ novel, the world becomes populated by flattened archetypes who, almost in the span of a sentence, blossom outwards, inflating into truth as time regains its usual rush:

A figure steps from the dim interior. You jerk awake
on the top deck of a passing bus, gesticulating
like some jumped-up aquatic ape observing Venus
as if that planet was a sign, a symbol at our disposal,
and these are some of the ways we deal with time.

I’m the age
of that guy in American Beauty
who tries to fuck his daughter’s friend.

Even as the speaker wonders ‘how it’s going to end for me’, he remembers catching a glimpse of his own old/young hands and being swamped with disbelief at the inevitability of ageing:

As a kid I used to scan my granny hands,
thick blue veins breaking the boyish surface,
and wondered how grown-ups got so weird.

I’m 50, turning odd and old, I think,
lilting to myself, pretending things exist
that are completely concealed.
I see my daughter looking at me thinking,
how do old people get so weird?

‘Three Eggs’ does this quite well, bringing something ominous (and almost holy) out of a description of a restaurant dining-room:

The head waiter in the dining room of the Hotel Vojvodina
had a voice of screws and diesel, the great bulbs of an iron
chandelier hung over him like a crowning aurora, a cluster
of alien moons with dimmer switch and milky atmosphere.
He served us a plate of fried eggs, three third eyes,
enough to count as witnesses, pale whites rheumy
around the yolk and two burnt fuses of bacon.

This almost luminous strangeness is, in places, revelatory. Of course, in order to qualify as such there must be something to reveal. What these poems most often show us (gently, with music and a pleasing rhythm) is that the image of the world that we seem to have collectively agreed on is a fiction. There’s something larger and stranger underneath it, if only we could learn to see.