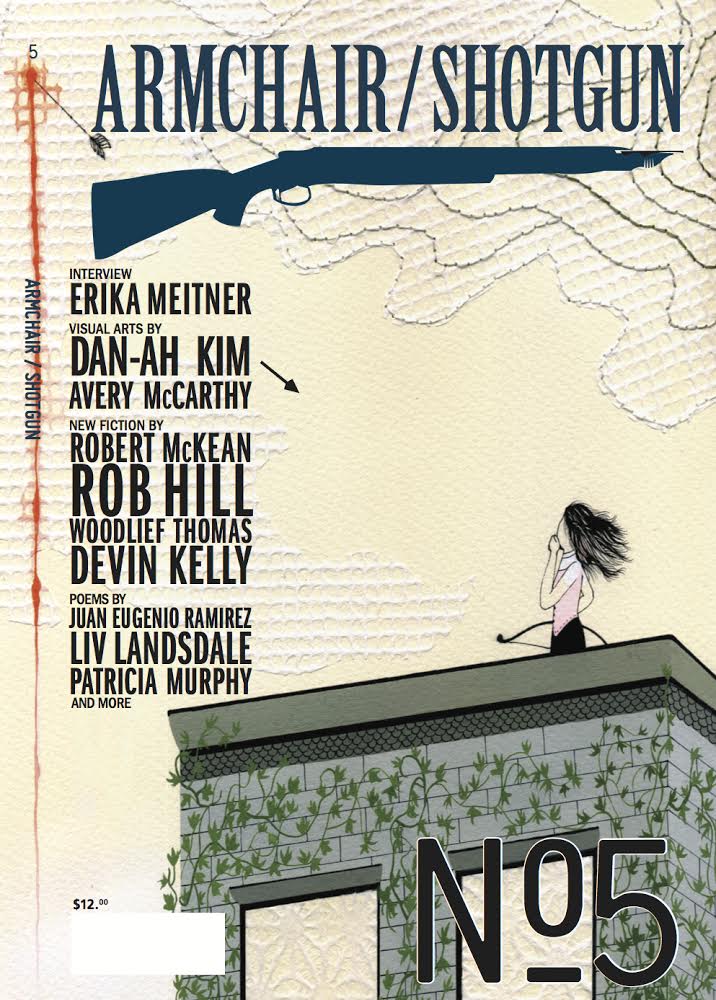 If, like me, you’ve always wondered what literature’s answer to The Voice would look like, then I think I’ve finally found it.

Ever since the first issue was released in 2011, the bookworms at literary journal Armchair/Shotgun have been giving grassroots writing a chance on stage, as it were. Anyone who feels they’ve got a story to tell can audition – be that through poetry, visual art or good ol’ short stories. The key thing is they are anonymous to the editors unless selected for publication. An automated system even strips the sender’s details from entries that are e-mailed in. No matter how impressive, neither your previous work, your fluffy bio nor your PhD can help you here.

The judges’ chairs will only turn for good story-telling. 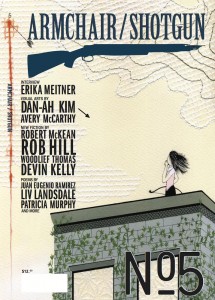 And so, like the four issues that have gone before it, No 5 has unearthed some exceptional pieces of work.

But it’s all told so beautifully. Robert McKean’s ‘That’s All That Matters’ illustrates an honest man’s struggle with his alcoholic father as it appears to devastate his family and even his love life. The almost comic descriptions of the protagonist’s father, who staggers booze-laden and naked from one upstairs bedroom to the next, put me in mind of Emile Zola’s hapless Gervaise in his dark Naturalist novel, L’Assommoir.

Entrapment pervades in ‘The Green House’ by Woodlief Thomas – firstly in the physical sense, whereby a depressing backdrop of the wide, dusty streets that enclose the ivy-ridden crack den is the only world that the stricken characters know; but also thematically, with the characters offered little hope of escaping neither the paranoia nor tedium that hangs over them.

The dystopian nature of these sagas may not be to everyone’s liking. But it draws an important relationship between person and landscape – between human and physical geography – on which this issue appears to hang its hat.

Following the release of her journalistic-cum-poetic study of post-industrial Detroit, Copia, the transcript of an interview with Erika Meitner guides you on this count. It’s a genuinely interesting consideration of the thought processes at work when attempting to uncover the beauty (or otherwise) in one’s struggle with one’s surroundings.

This tête-à-tête with editor Evan Simko-Bedarski is the most obvious examples of this issue’s thrust.

But there are subtler instances. Such as the intriguing architectural plans that introduce each of the journal’s sections. And then there’s photographer Avery McCarthy’s ‘The Theory of Everything’ and a collection of visual art by Dan-Ah Kim, ‘Stitches’ – all of which invite us to ponder how the physical world, even microscopic elements therein, govern us and our temperament.

But, returning to Armchair/Shotgun’s raison d’etre, I am hesitant to go too deep, too quickly. The other times I have reviewed this journal (#2 & #3) I have perhaps gone overboard, eulogising over the intricacies of some of the pieces, yielding a giddy – if slightly-longer-than-necessary – account on each occasion.

This time around I purposefully have not. Just in the same way its editors pore through the contextless contributions at the genesis of each issue, just read it for what it’s worth. That’s the least we owe to good, honest story-telling.