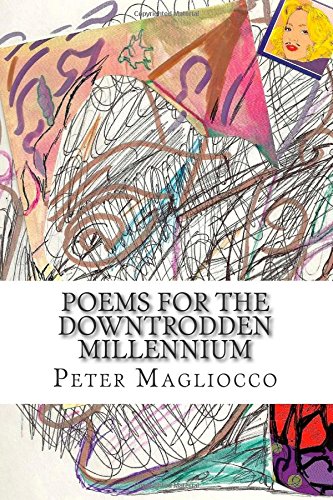 In Poems for the Downtrodden Millennium, Peter Magliocco turns his editorial eye to the apparent marginalisation of ageing in his home town of Las Vegas, “Far from California wildfires/ Or relentless Southern hurricanes”. In “The Sartre of Spin Cycles”, he writes:

In a laundry room where everything
Is either broken or about to be,
Perhaps like human beings
Philosophizing over suds?

Old clothes may come clean
But our hands will never be.

These short muscular lines echo Bukowski, although Peter Magliocco is more concerned with thoughts than with the poet-persona. He explores and comments on the human condition in which “the sleep / Of ignorance purged us / Faster than cancer infiltrating / Our high-rent graveyard cities” (“The Sleep of Ignorance”). These poems are dark, offering only observation, not solution, and no hint of hope. “The Fall of Man” considers 9/11 through “the inscrutable flight of ducks”, referencing The Green Lantern, The Phantom, King Kong and Gotham, before concluding:

Beyond burning soul
Specks of murderous aviators
No superheroes save
From blindness,
Through diehard believers
Invisibly pace below

With minimal punctuation, an initial capital on each line and a tendency to present poems in long opening stanzas, it’s not always straightforward to read rhythmic intent. Many poems have a discursive, conversational tone, as if catching up with an old friend over a few beers and turning to philosophy once gossip’s been exhausted. In “NOT (But Fading Away)”:

I am not a reader of poetry because billboards
Bore me, the papers all say the same thing,
& the bestsellers are written by the same people.
I am not a proper Philistine because
It takes too much practice to become one,
Or maybe just sucking-up (which is worse),
While currently an Elvis impersonator rules
The badly-lit corridors of our brains
With sounds of anti-silence pounding
On the White House asylum door
Of contraband, & an ex-poet laureate,
Like a gun-toting, anti-abortionist with principles
Tells us, point blank, to quietly step back
From the shape of things to come.”

The poem refers to Madonna (for her adoptions rather than records), and the title could be referencing The Rolling Stones or Buddy Holly. There is a tendency to speak to the converted, the literate who let go of their ambitions and become downtrodden, fearing youthful ignorance. “Winter in Hinterland” suggests readers “Forget dead Sylvia’s head in the oven / Cooking her mind slowly For the repast of literary ghouls” and become freelancers selling viruses, ignorant of bad omens, “For the Mars rover waiting / To beam back images of / Life found dead. At last.”

Two poems, “November 22 Snapshot” and “Benazir Bhutto”, explore their subjects through images. In the former:

His morgue photos distress us,

Vanity gone from the pose
Unflattering, prostrated as
Such horizontal oblivion.
Not the photos originally desired

When he motorcaded through Dallas
& so many in the street-lining crowd
Held aloft cameras of every
Shape & size.

In sleep your disarray of hair
Patterns like seaweed in nocturnal mode
Old waterways across the country you led,
& your face in quiet repose gleams
Under moonlight the sky casts down.

I wanted more poems like these, which felt as if they’d dropped a layer of artifice and allowed the poet to explore something other than a jaded, self-conscious persona writing under the assumption his readers looked and thought just like him.