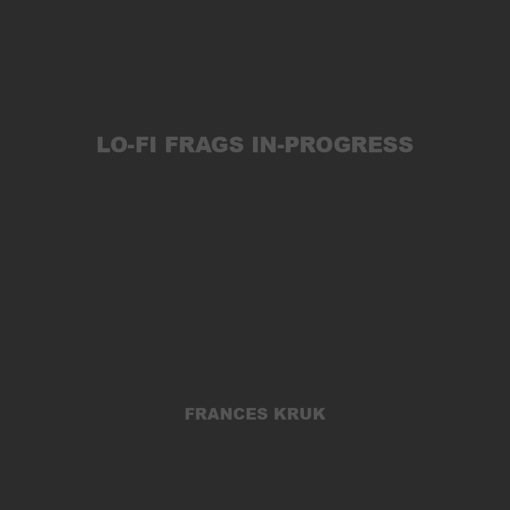 I am struck by the consistency of lo-fi frags in progress, the first full-length book from Frances Kruk. The (anti-) artistry of its fragmentary narrative is suspended over a series of 16 collages dispersed throughout the text, and a translation (‘the fidelity of which’ has been ‘eroded’) of Danielle Collobert’s ‘Chants des guerres’. These transitions are fluid and sympathetically accomplished. Bound in an aptly smooth-yet-unsettling charcoal cover, this book is a harmonious object.

lo-fi frags is also a study in violence, an attack on ‘official’ poetry and an introduction of the ‘cracked lyric I’, Kruk’s term for a poetic voice that maintains its integrity while refusing to be categorised. Kruk’s PhD thesis is entitled Violence and Identity in the Poetry of Danielle Collobert, Maggie O’Sullivan and Raúl Zurita, which, in discussing how its author’s practice connects to the work of those three poets, cites an earlier version of lo-fi frags in progress, the full text of which is appended to the essay.

It is interesting to read how Kruk’s process incorporates a diverse set of external sources to forge its vocabulary: scientific text books, military handbooks and reams of research into accounts of torture from a number of historical contexts. (There is room too for the idiosyncratic and personal in Kruk’s choice of words: the text is populated by sinister ‘dwarves’). However, readers should not expect a literary version of an Adam Curtis documentary: it is harder to preserve contrasting tones and textures of different sources in a poetic work than it is when editing together video materials, and anyway this discrimination does not seem to be necessary to Kruk’s project. Even in the collages, the aesthetic of production overrides most attempts to categorise its cut-out elements and their origins, just as, in the reworked Collobert section, translation ‘became perversely calcified within the tissues of lo-fi frags in progress‘. Kruk’s sure hand is needed; without it, the ‘cracked lyric I’ might be lost in a sea of détournement or misappropriation, but there is no authoritative voice binding the fragments as with Adam Curtis’ self-spoken narration: that’s the whole point.

From the beginning (after the disruptive ‘shake’ of the first collage) the location of the ‘I’ is questioned – ‘where am I that I speak so naturally’ – this line isolated on the page. Multiple contexts frequently shift the whereabouts of the speaker, but more innovative is Kruk’s attempt to complicate the ‘I’ by allowing it to be its own ‘you’, allowing the roles of ‘oppressor’ and ‘insurgent’ (identified in Kruk’s thesis) to be blurred, as the speaking voice – which is of course already a compression of many voices – seeks to articulate its overlapping histories and identities.

Kruk approximates a literary version of performance art, this variously constrained speaker forced to resort to measures other than what is expected of a poetic voice:

or else excrement
the messenger the holy outpour

am I to be the ecstatic am I to
be a zone,
believe in all these tubes
perfect my every abscess

If the above poem is striking enough to represent Kruk’s work on its own, it gains more power within the series. The body, reduced to digestive tract, has been set up much further back (‘my bowel diary… this shit for posterity’). The word ‘ecstatic’ picks up a repeated reference to a ‘grin’ or ‘smile’, most disturbingly the ‘stuck tight Grin’ that appears in an act of violence or burial ‘in the woods’. In the penultimate line, ‘the centre’ has a dual resonance, first in its echoing (mocking?) of a famous poem by Yeats, and secondly because it is the latest in a series of ‘centres’ in lo-fi frags in progress that connect different spaces of torture, with an implied geometric relationship to another frequent image, the ‘circles’, which explicitly reference Dante’s Inferno. In repeated words such as ‘centre’, ‘circle’ and ‘mine’ we see the ‘cracked lyric I’ reverberating through the language of the book.

All these terms are specific yet miscellaneous, complicated by their provenance in non-official histories. If we are not sure where we are, line to line; if the effect of the text (and the collages) is to make the reader grasp for context in vain (or with a search engine); what we have instead is a careful system of signs composed using words, phrases and images found not incidentally but precisely, in the course of Kruk’s assiduously deep and mercurially wide research.