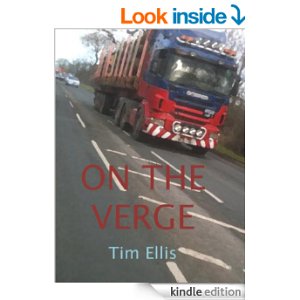 On The Verge merges a  numbered, diary-like recollection of a hitch-hiked journey with titled poems on wildlife and the environment. This is from ‘number 6’:

Do I see the shadow of a smirk
flit across the features at the last one?
Most likely now. My driver is a berk
.- his grasp of overtone is not a vast one.
‘Writin’ poems will never pay your wages
-‘ts too much work to read ‘em! Ah stick t’daillies
– ‘eadlines, tits-out tart, ‘n’ football pages.
If you got summat to say, you ough’a say it!’
Following that air-gulp of loquacity
he plunges like my whales back down to dumbness.

The driver, Arno, veers close to a stereotype of a tattooed tabloid-reader. Tom, the rhymer, casts himself as an anthropologist. The two continue their journey in a kind of truce, Arno content with some human company. Tom is grateful for the ride whilst he writes poems, initially with a pen in a notebook and eventually with a laptop charging from the cigarette lighter. His wildlife poems have a romantic inclination; in “The Musk of the Full Moon”

Truck drivers’ horns are trumpeting wolfish tunes
as she flutters across their path, a flighty sylph,
the hint of a wisp absorbed by dark woods.
Oaks enclose her. Shaggy ink-caps push
their fists through leaf-mould. Maidenhair ferns enmesh
her hips. Branches poke and snatch at her hood.
She tries to relax, remembering how these trees
would fidget with flocks of finches when, as a kid,
she’d come in spring to bunch all the bluebells she could.
But now at night she squirms, ill at ease,
sensing the needling stares converged on her country
raincoat probe her soul. She feels awkward.

Tom finds a Tigger toy in Arno’s cab and observes

so Arno’s ‘love’ of tigers gives me qualms.
I’m sure he’d hitch his wagon to the trade in
their body parts if anybody paid him.

It’s a hook for a rant. Readers have no idea if Arno really likes tigers, if Tigger was left by a nephew or a lover or whether under those tattoos he’s actually a great big softy. A villanelle, “Bigfoot”, ends:

I’ve fallen flat and melting ice-caps pour
cold water on my head. I choke on truth
and now I’ve clomped my prints on every shore
the dent I’ve left is sand, for evermore.

The rhymes and repetitions are well handled but the “evermore” is overtly poetic and echoes Poe’s “The Raven”. The final poem, number 27, ends:

My words my fail but Hey! My body could be
a battery for the planet’s power grid,
energising life into this good tree.
This slab of soil would be my coffin lid.
This mat of roots could be my burial gown.
It’s rocking up-and-“

An editor’s note introduces the book: apparently the titled poems were entered anonymously into a pamphlet competition, but the organisers couldn’t trace the entrant. One approached Tim Ellis, knowing that he wrote environmental poems and these anonymous poems were similar to his style. Tim Ellis denies being the author but gets to keep the poems anyway. The numbered poems allegedly come from a notebook found with an unidentifiable skeleton of a twenty-something male found in the roots of a tree. It’s thought the tree was blown over in a gale but the roots were strong enough to right it again when the wind changed direction and the man was trapped underneath. The police had scanned the notebook pages and approached Tim Ellis in his role as coordinator of a poetry event to see if he could identify the writer. He couldn’t, but suspected the journal and the anonymous poems came from the same writer.

It’s a interesting story, but not entirely credible. There are reports of skeletons found in trees but, apart from Gristhorpe Man, none come from Yorkshire, although there were gales in that county in 2004. The story has a purpose, adding another layer to these poems and allowing Tim Ellis, casting himself in the role of editor, to dodge criticism that some of the poems are a bit bloated and rhyme-driven on the page. On the Verge works if read as a narrative performance piece where you focus on the sparkly outfit and fail to notice some of those sequins hide a threadbare patch. It entertains.

Proceeds from sales of the book go to the Black Rhino conversation project in Africa.

Speak the Unspeakable by Tim Ellis

February 24, 2016 Becky Varley-Winter Comments Off on Speak the Unspeakable by Tim Ellis