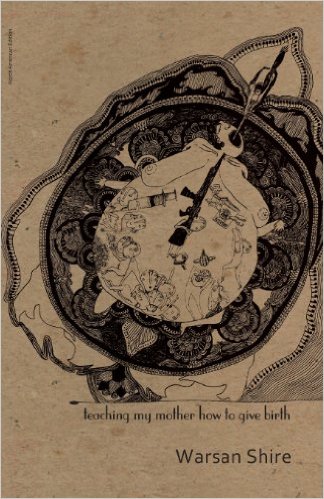 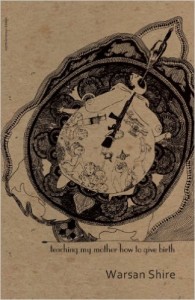 When I think of 2015, Warsan Shire is the poet who comes to mind.

It’s often said that poetry matters, especially to those who don’t normally care about poetry, during life’s big events: funerals, births, weddings, acts of remembrance,… It’s not that this year wins any particular ‘most tragic’ prize, but it does feel like there has been an almost relentless pile up of tragedies, massacres, natural disasters, double standards and systematic attacks on society’s most vulnerable,… In the middle of it all, Warsan Shire’s words spring up, time and time again, captured in a picture, quoted, circulated on placards and tweets, held up like a talisman…

When the public awareness of the refugee crisis gained momentum, it was her words taken from her sequence ‘Conversations about home’ that were heard:

(from Shire’s 2011 Flipped Eye pamphlet Teaching my mother how to give birth).

Now, as the year closes, an extract from her poem ‘What they did yesterday afternoon’ also went viral:

later that night
I held an atlas in my lap
ran my fingers across the whole world
and whispered
where does it hurt?

Shire is a Kenyan-born Somali poet living in London, and her writing is fascinated by displacement bodily-expressed, ‘her hands are a civil war’, a wife becomes a ‘boat docking in from war’,… Shire writes of her own experiences but also the experiences of those she’s encountered in her activist work, as is the case with ‘Conversations about home’, which was written after spending time with a group of young refugees in 2009. The results ring true in a way that transcends experiences and geographical constraints.

Nothing in Shire’s language is alienating, yet she has a gift for turning the domestic alien, for confronting everyday abuse without simplification. This is exemplified by the final poem ‘In Love and in War’, which brutally reads:

To my daughter I will say,
“When the men come, set yourself on fire”.

But it’s also a pamphlet full of fierce bonds between women. In ‘Birds’ the narrator and Sofia ‘giggled over the static’ as Sofia narrates using pigeon blood on her wedding night. It’s undercut by the depiction of the happy mother in law, who begins as a caricature, but ends up sympathetically tragicomic ‘her arms fleshy wings bound to her body, / ignorant of flight’.

Teaching my mother how to give birth is a heavily populated pamphlet really, doors open and close on different relatives and anecdotes. The mood swings rapidly between humour and horror in the space of a line break, as unstable as our modern world. 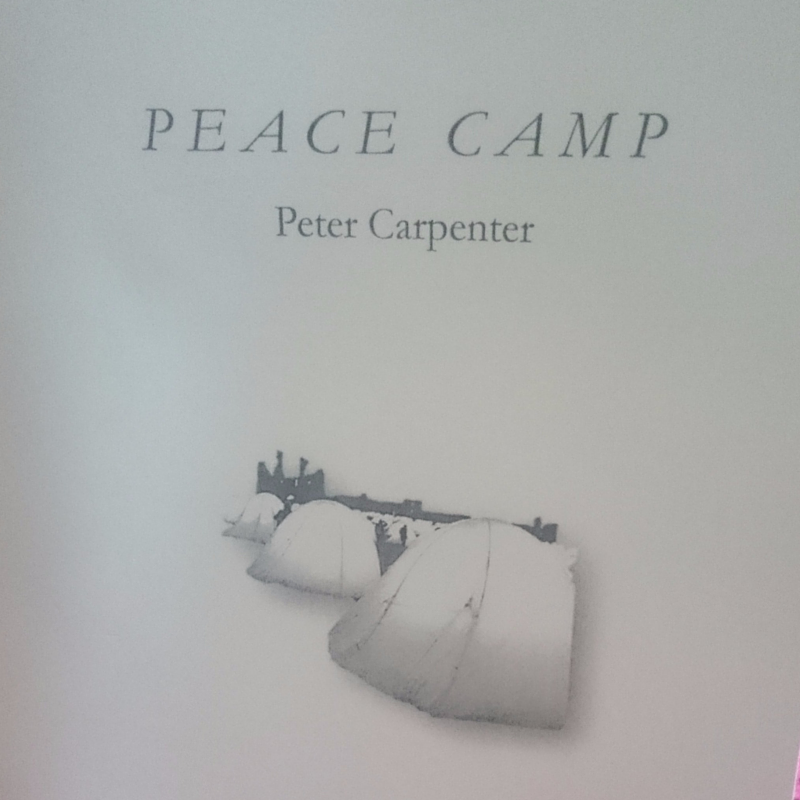