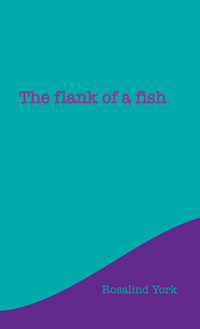 There’s something quite comforting about the Otley Word Feast Press’ pamphlet covers, they remind me of some sweaters I wore in the 90s (that’s not a dig, I love those sweaters). The press grew out of Otley Word Feast, a festival that ran in 2012 and 2014. I point this out mostly because it strikes me how well Rosalind York’s the flank of a fish would work out loud – I wonder if that’s how the authors for their pamphlet series were secured in general.

Always tricky to qualify ‘this would work well aloud’ comment beyond a hunch, I mean by it that there’s no obstruction to understanding, that the poems often follow a narrative it would be easy to carry an audience along with, with moments I can imagine a gifted performer milking beautiful. Just as one example, there’s the poem ‘Have You Seen This Stepford Wife?’ which ends with

and there are those who say

which you can imagine getting a roar of approval (or groans, or a mix) from a crowd. Many poems also favour a mode of direct address (‘Pick a life, any life / then get lost in it’), speeding up the process of kinship between listener and performer. My problem, is that on the page, these situations, these set-ups, are over-spelled out. I’m not saying that poetry should be a game of hide-and-seek, but when all the work is done for you, you start to wonder what you’re there for.

Having said that, sometimes you’re just happy to tag along for a ride, as with ‘Song’ which charts the travels of an uncatchable song across the world ‘out of the reach of leg wires’. It’s light-hearted and delicious fun, you can see the cogs turning without caring.

A couple of poems try to do interesting things with the page, both happen to take a landscape for a subject. The stand-out of the two, ‘The Way of the Sea’ is composed of mini poems scattered across the page, such as:

HORIZON
The same place forever but never the same water

Now this shows the potential of York’s poetry, the six-pack of beer image is well observed and allowed to breathe without further explanation. This more impressionistic mode poetry works well for York who, elsewhere shows flashes of brilliance:

One twisted wrist and a lighthouse
rears from rock

Came home in our coats of bone,
so thin you could have picked locks

An intriguing début overall, it’ll be interesting to see which direction York goes in next.