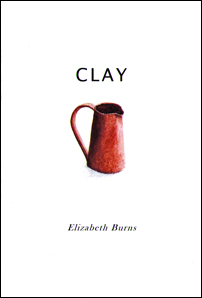 Pots, bowls, jars, jugs: the poems in Clay take vessels as a starting point, celebrating both their physical presence and metaphysical possibilities. Each small, spare poem is itself a vessel, holding empty space for the reader to fill. This is from ‘Potter-midwife’:

Her hands are used to the squelch
of clay, its milky slips

and to the slush of blood and mucus,
breaking waters, birth fluid

That poem is set in Africa. Clay is intimate and domestic but also encompasses the world – China, New Mexico – moving from birth and human origins towards loss and death. It does all this in short, apparently simple, quietly declarative poems. Short lines mostly fit the sense, with little punctuation and rarely a full stop at the end of a poem; we’re left as much space to think as words and bright white page can give. Burns achieves a disembodied clarity from her tangible objects, a feeling that it’s possible to get from walking round Bernard Leach’s studio or looking at an installation by Edmund de Waal. Or from gazing at a single, ancient pot, rare survival of a lost civilisation.

Burns plays with life cycles and potters’ wheels, with the roundness of pots and their nature as containers, like body to soul. She links her material to the fire and ash of the kiln and human mortality, for example in the three lines of ‘His ashes’:

His ashes contained in the clay
that made this funerary jar

Twice he passes through fire

Some poems name a potter whose work they describe beautifully, as in ‘A life’:

How ripples of clay
move up the pot
like breath –

Descriptive passages in a couple of longer poems (still under 20 lines) are the only place where some of the language feels a little less striking, for example in ‘The globe jars’:

Yet this poem as a whole, reaching from the jars to skies, sea and the green / blue of Earth from space, is lovely. Part of Clay’s power is that each poem is a facet of the whole. I’d like to quote from all 18 pages – for example ‘The messenger’, in whose seven lines a visitor appears, quotes a verse from the Tao Te Ching about the usefulness of emptiness in pots, and is “gone, / leaving footprints in the snow”.

The pamphlet has a Taoist, Buddhist feel – unifying, harmonising, rejoicing in the mystery of life and death. Each poem settles in the mind. In the last one, ‘Gift’, someone gives a bowl she’s made,

its porcelain so smooth
you could hold it all day
in your hands, cup it on your lap,
gaze at the colour of its glaze –
this rare and lovely
almost-primrose yellow

There the pamphlet ends, in a blaze of sun, “spring-light” and a dash. It was published just before Elizabeth Burns’ early death in 2015. The reader may feel that Clay is to her as water jar is to spirit, in this four-line poem: