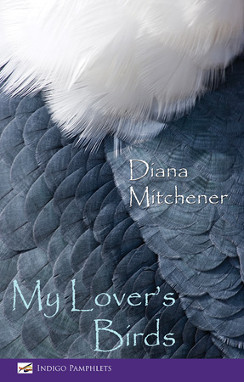 The poems in Diana Mitchener’s latest pamphlet, My Lover’s Birds, are at their best when they deal with the tension between brightly-recalled and forgotten details that compose the history of a life. The past is a story which we tell ourselves in an effort to make sense of our present. It is important, for the sake of our sanity, to make that story as accurate as possible, but it is just as vital to remember that (because our brains are organic) our memories are inherently flawed.

This tension forms the spine of the pamphlet, and it is most articulately rendered in ‘Gypsy Grass’, one of the first poems in the book. The speaker’s family are setting out to visit the grave of their (presumably) long dead mother. The children are following the confused lead of the father through close-packed, long-neglected graves; all of them are at a loss:

Was he embarrassed
not to be sure? Not to say with conviction:
‘It’s here. This is the place. Over here.’

The speaker does not blame her father for forgetting. Her memory is just as flawed as his. ‘I seem to remember that it was autumn / though it might have been a chilly summer’s day’. She’s more concerned with accurately recording the details of feeling. Her sister’s protective anger, her own slow dismay:

Was it my sister who asked tetchily:
‘Won’t there be a record? Somewhere?’
pained for my father, angry with me
for insisting on coming with flowers for my mother,
cornflowers and gypsy grass drooping in my
loosening grip.

‘Not My Cat’ is a reluctant love-poem about a stray named Loki who, the speaker insists, does not belong to her but which she nonetheless cares for:

Although He is Not My Cat
I treat Him with respect.
He dines on salmon, tuna,
rabbit and vegetables
from vacuum-sealed packs.

This cat-like insistence on independence in the face of obvious love is belied by the truism that you own what you name:

Finally, ‘The Second Arrow’ treats the wounding guilt felt in watching a loved one slowly dying:

‘Are you there? Is anybody there?
Help me!’ she cries.

Over her weakening moans and tears
I bow my head over my tools.

Watching a loved one suffer is difficult enough without the second wound, the impossible desire to have been able to do more to help:

After the glancing wound of her passing,
the second arrow, guilt-tipped, will zing
at each echo of her cry,
a quivering shot
striking it’s target
here, here, and here.

In this pamphlet pain and humour coexist, rubbing shoulders, occasionally uncomfortable, but unable to ever really separate themselves. They are, after all, the substance of our memories.