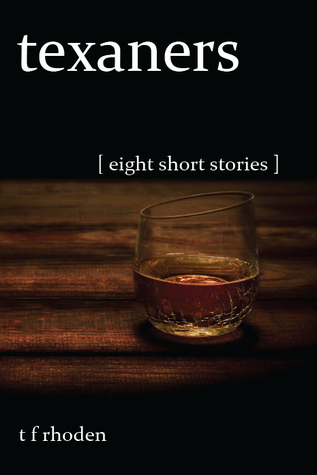 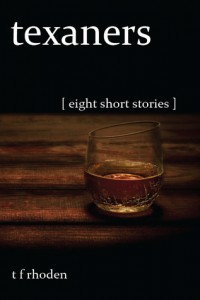 ‘…those perfectly imperfect souls of expansive, yet common diversity.’
-Texaners

What comes to mind when thinking of Texas? What stands out from the jumble of imagery that us non-Texans have subconsciously absorbed from various transmitters? Some montage of the following, I would say: the lonely ranches in the desert with their clanking windmills; the Rio Grande; cowboys silhouetted by the red setting sun; Country and Western music; the Dallas theme-tune; gun-toting, shooting, Second Amendment espousing Republicans; George W Bush; oil fields; all wrapped up in the sweltering Texan heat. And in light of this, this reviewer can readily understand Rhoden’s compulsion to attempt to debunk these stereotypes. As Rhoden himself says:

These stories are about new Texans—new Texaners. These children of the new Texas have no idea, no connection aside from locale, of that Texas of yesteryear.

Instead of cowboys Rhoden is exploring suburban, city, Texan life, particularly from the perspective of those that don’t find themselves apart of the Texan stereotype – the students, the immigrants, the multiracial, the liberal, the artists, among others. Rhoden has cited James Joyce’s Dubliners as a source of inspiration for this collection, and so he has set the bar high when attempting to emulate Joyce’s exploration of place-based identity.

Texaners consists of eight short stories. From the outset we are cast into a world far from cowboy Texas, in fact, we first find ourselves in a Chinese restaurant watching Cindy struggling with the realities of adolescent life in Texas. In ‘Chinese Spoons’, Cindy is one character among others of non-Caucasian origin: the Guatemalan chef who gives her a derogatory nickname; her alluring Mexican tutor, Navarro; her Cambodian school friend, Kathy. Through the text we witness the intermingling of different cultures, backgrounds, languages and dialects; we are thrown into a metropolitan Texas rather than the reductive mythical one. The characters in the story often play with their own stereotypes; there is a degree of name-calling and teasing that exposes the matter-of-fact prejudices that each face. The plot flits around with Cindy’s adolescent concerns and all that goes along with that – homework, hints of romance, overbearing parents and a longing for escape. It turns rather sharply when her friend is recovered from an uncomfortable situation, and plot-wise, this jars a bit against the former light-heartedness of the story. But the text contains some simple and affecting moments and turns of phrases that I think are best seen in the author’s shorter stories.

‘Oils’ is a brief and beautiful little story of Sevek, a painter facing the realities of creation in light of the pressures of family life and finance. It merely describes a moment of creation before the rest of the family wakes – of the simple act of colour falling on a page before the rest wake and disrupt his solitary activity. ‘Drywall’, also achieves a lot in a short space. A football coach is revamping his house, one he has bought in the overbearing shadow of the stadium he works in. In these stories, and the next, the characters are of various ethnic or religious orientations, but all Texans.

Yet, the impulse to introduce characters of different ethnicity or religion shouldn’t be considered the primary objective of this collection. Nor is the debunking of a stereotype as easy as introducing a more varied demographic to the reader. In fact, the author has to be careful that he is not merely introducing different stereotypes when trying to undo the outsider’s dominant vision of Texas. Sometimes I worry, if there are points where the text can seem a bit simple in its approach, seemingly adding characters for the sake of diverging ethnicities. And certainly, the story ‘W Martin Luther King Jr Blvd’, is a little flat in its exploration of Texan racism. The main character Scott is riding around town when his school friend’s prejudices are confounded by their interaction with a black man who is drawn as both amicable and intelligent, against his racist expectations. Scott then ruefully considers his friends opinions in a rather simple epiphany that racism is wrong:

‘Scott…mulled over his companion’s not-so-latent racialism, weighing the good he knew of him against this one particular perversion…Scott wondered sometimes at his friend’s comments…’

Until, diagnostically: ‘-He’s not really my friend, he’s kind of an asshole, actually.’

It is the least strong story in the collection. Saying that, the majority of the text avoids such potholes. The best moments are the real, profane moments of everyday life, sometimes humourous, sometimes sad. The collections strength is delivered not so much from the diversity of surnames introduced to us, but from the characters’ realities: the directness of their everyday lives in Texas; the small day to day things that illuminate elements of a characters personality above the status quo. For instance, like Nyoko, in ‘Rooftop’, cheekily rebelling against tutor’s bland assertion that she should like Achebe because she is Nigerian, or Peter, from ‘Airfair’, who bucks the belief that Texans are passport-shy by living a nomadic, cross-continental lifestyle preferring to appreciate his home from afar instead of from within.

Overall, this collection of stories offers enough to hold to the interest of the reader, it’s not James Joyce, it is much more modest than that, but it doesn’t fail. Texaners has its own unique flavour and that very much fulfils the author’s original intention.