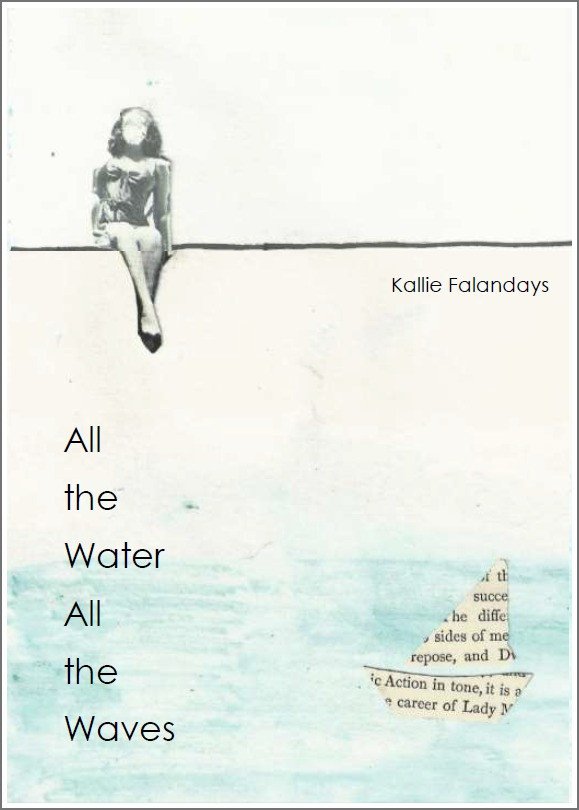 According to Carolyn Forché, ‘One cannot transcend trauma. Trauma is trapped and clings to that which happened. We live not after trauma, but in its aftermath.’ In the untitled prose poems of All the Water all the Waves, an unnamed woman is profoundly alienated from herself, wishing for death:

This isn’t what dying is like but, being dead, the woman woke up and then
kept waking and… she sat back in the water and she let all the darkness cover
her like a dish like a night with wings like a ladder without foot-holds.

I am reminded of a novel by Andrew Miller, called The Optimists, in which a journalist returns to London after witnessing the massacre of hundreds of people inside a church – the door is bolted and the church is set alight. For the rest of the novel, the massacre is not mentioned, but we witness the slow unraveling of the journalist as he succumbs to post-traumatic stress disorder. Here, the woman is profoundly passive, empty, after experiencing an unidentified extremity of existence:

The flat tone and use of third, rather than the first, person are further distancing devices, reminiscent of Ted Hughes’ Crow poems. The sense of dissociation also powerfully conveys what is left unsaid: ‘There are many other ways to say this, but this is the one that still travels.’ Sentences are made strange by the incongruity of images and juxtapositions, and frequent lack of articles:

She wouldn’t become starlight, lamplight, sunlight, she wouldn’t undress in
the dark because she’d be hiding, she’d be blanket, she’d be a dimmer thing, if
you loved her more, she’d be still dark, black hole.

The accumulative force of listed similes creates a momentum and psychic energy that moves through the poems. Falandays uses language to embody the woman’s thousand darknesses, but so evocatively, and with such grace, we are spared the violence of graphic, visceral acts. Falandays is interested in aftermath. Through a series of juxtapositions, incongruities, and contradictions, the woman is often represented in ‘other’ embodiments, the most successful of which use a single conceit:

If woman were cellphone, she’d take so many pictures, have so many buttons,
push me, she’d say, so that when it rains she’d have so many fingers all up in
her, so many starry evenings would rush her to morning, so many sittings,
placings, resting spots. Woman would be more held than cat, remote, or
keyboard. Woman would finally and fully be pocketed, patted, and cleaned.
Think of all her replaced parts, her jiggling “l” button, her dirty hiding spots.
Think of the man’s face, after seeing her vibrating, alone. Think of what he’d
say to her if he took her out. Think of all the drinks spilled on her, all the times
she was dropped, think of the sadness she feels how, after coming home, the
man plugs her in but doesn’t turn her on.

Visually, I’m not a fan of prose poems, but the effect of words strung across the top half of the page while leaving the bottom half empty, works as a concrete poem, conveying the woman’s sense of claustrophobia in her attempt to escape the conditions of her life and perils of her imagination. Although the chapbook is (beautifully) titled All the Water all the Waves, some of the woman’s transformations are more earthy:

When woman was paper, she was folded. She was torn up. She was heated.
Woman read about herself when she was tree house. She was barked dress.
She saw a video of herself becoming herself again and didn’t want to see it
anymore. She remembered the basic raw material, the remembered de-
barking, the collision, the collection, oh oh the heat. She remembers chipping.
The loading. The digestion, the steaming, the wet pulp she became, like tears.

The powerful accumulation of processes described – torn, heated, debarked… chipping, digestion, steaming, the winding, the spools, ‘the heaviest parts of herself reflected in light bulbs’ – is an effective ars poetica too.

On p.16 of this 22 page chapbook, we abruptly and unexpectedly switch to Man, in a perhaps too long (three full pages) list poem of metaphors:

These staccato sentences build gradually into an impression of a sometimes tired, wilting, aching man, and these aspects might make the reader somewhat sympathetic to him, but for the tiny repeated actions of foreboding: ‘Man was deep end…Man was torrent…Man was rattling window…’ The poem that follows introduces two figures – the Man sitting and waiting by the river, and a little girl who, with the help of a horse, takes dramatic action, so that: ‘…the woman became something else again.’

This is a beautifully sustained and mysterious narrative, which, like Apollinaire’s hundred furs, gradually makes up a single coat.