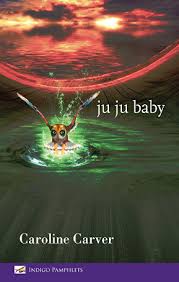 Caroline Carver’s poems are woven with fine threads, without pomp, but with vulnerability and tempestuous inventiveness. Born in England, she was evacuated in 1940 by convoy to Bermuda, from a bombed out, grey landscape to a place where rich colours sprout out of the very loam. It must have been like Dorothy trepidatiously opening the door onto Oz. She now resides in Cornwall, where she started writing poetry. She has won the National Poetry Competition, published a collection in West Indian dialect, Jigharzi An Me (Semicolon Press), and other collections including Three Hares (Oversteps Books), Tikki Tikki Man (Ward Wood) and Bone-Fishing (Peterloo Poets). Her latest, ju ju baby, offers 21st century myth-making. Like all myths, it is intransitive in origin, hollering to a darker past, a feral antecedent painted in oils.

The title page features a line from Psychological Science: “they found that babies looked at things longer than was expected”. People have a distinctive way of talking to babies, speaking somewhat slowly, using a sing-song voice, which I can hear in the first poem, ice-fishing:

Fragility and empathy are keystones in this pamphlet, as is a good dose of humour, illustrated in the second poem, ‘horoscope’:

Carver weaves her poems with distinct linguistic beats; not, say, with the music of Benjamin Zephaniah or Linton Kwesi Johnson, but with music nonetheless. The poems aren’t written in a pure Creole, but Carver’s own juxtaposition, which works well with her myth-telling. Her music is a skewed lullaby:

Carver writes beautifully, with genuine grace, and doesn’t pull her punches. For example, from ‘house of disappointments’:

Secondly, made with elegance:

it was summer when I went back
the all-weather season of midwives
I picture them. tweezers in hand

I perceive ju ju baby as ancient, supernatural, lamenting the disappearing landscape beneath him before he’s even had a chance to crawl on his land, which is his true inheritance.

This is an wonderfully unusual book, with a hummingbird heart of life:  ju ju grows within the pages, bonding with the gum in the trees, the water in the lakes, the fish and fowl of the Earth. It is a book craving nature, rueing our apathy towards our home.

I’ll leave you with some lines from the dreaming of john canoe, which embodies this passion:

Take it on a voyage, carry it in your luggage, take it on a train journey: ju ju baby transports with magic and charm.