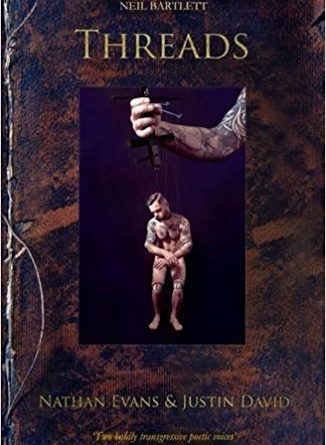 Nathan Evans and Justin David’s Threads is a collaborative work which cleverly combines a wide range of poetry and images into a unified whole. Visually stunning and aesthetically engaging, the quality of the poetry presented here however is sadly uneven, and on occasion that detracts from the total impact of the piece.

The idea of unity, of the ways in which lives are joined together (warp and weft) into the scintillating fabric of society, is the binding theme. Where the bond between image and text is strongest, this theme is undeniable – even in poems which suggest the narrator feels they have been surgically excised from that societal discourse.  The poem ‘Cadaver Man’ treats a speaker who descends, skinless, into a very British underworld:

leave the house with innards outwards,
layer-wrapped to hide my rawness.
But the ticket teller spots the bloody cuff
as change changes bearer, asks, ‘Alright?’
and the word whistles between bones

Later in the poem, the speaker joins ‘the meat rack on the 8:09’, implying that despite his intentionally vulnerable state of grotesquery, he is participating in a social act. Yes, the speaker is a cadaver. Yes, the speaker is as naked as it is possible to get – despite the frail disguise of butcher-paper wrappings – but everyone on the train is as dehumanized and naked as our speaker. They are joined together in that. The image composed by Justin David as a complimentary response to Evans’ poem is skilful and apt. The viewer is presented with the conjoined ends of two underground carriages (one white, one red; the seam in the middle suggestive of a pill) set against a gray brick background whose windows reveal rack after rack of butchered ribcages jostling each other against the glass.

In other instances, the pairing of word and image isn’t nearly so effective. Generally, the photographs in this book carry most impact, and here the poems detract rather than compliment them, as you can see in the four-line poem ‘Hot Water Bottle’ which ends with the whimper:

This sentimentality is at odds with the image of a body, curled into a foetal position, draped in a clinging veneer of crumpled red silk. The image of solitude is powerful and incompatible with the insubstantial nature of the poem.

I believe part of the unevenness in literary quality displayed here, springs from the fact that many of the poems in this book were written as song lyrics for an album the writer released a number of years ago. Lyric-writing is a delicate and beautiful skill, but it is not necessarily synonymous with poetry, they don’t tend to work so well on the page. Other poems in this collection were written across a period of ‘over twenty years’ – beginning when Evans was eighteen years old. While it is possible (and more than possible) for an eighteen-year-old to write a very good poem, it is difficult for an adolescent brain to achieve the sense of emotional distance and maturity which is needed to save a poem from either raw angst or callowness. This is evidenced in the poem, ‘Mother Ship’, penned in the author’s teenage years, the first poem in the book. It opens with the lines:

She keeps me tombed
in clockwork womb,
feeds me and carefully
selects what I can see.

The accompanying image is of a ragged teddy bear in a black room, sitting in front of a static screen TV. The poem ends ‘then I shall be free.’

As a whole, Threads is an interesting and complex piece of work. For the most part, the poems could not function as a text without the images which accompany them, but that was an intentional choice on the part of the authors, and in this case analysing the poems outside of the context of the work as a whole would do a disservice to the book. The influence of the cabaret aesthetic is strong in these pages; there is a dark, lushly sexual seam in this silk which is wonderful to see. Since such a rich flavour is perhaps better appreciated when taken in sips, and since some of the poetry waters the brew in a displeasing way, the whole would have been better served with some careful, considerate cuts.