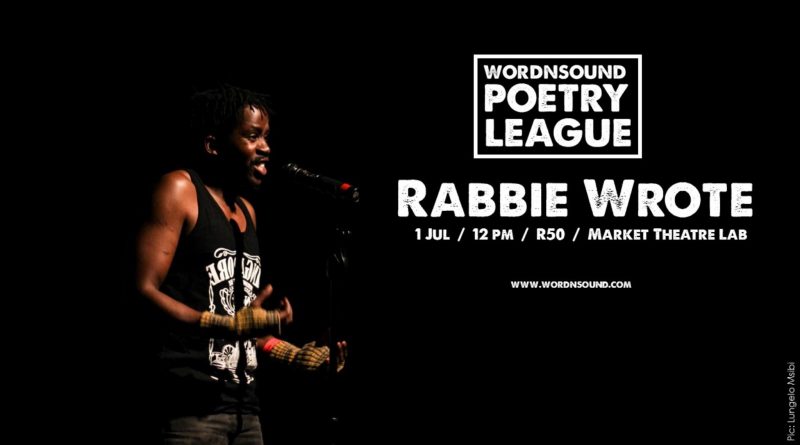 There is a point where tempered logic and emotion meet…Word N Sound (WNS) brings such a point to Johannesburg audiences every first Saturday of the month at The Market Theatre Laboratory in the city. About twenty of Joburg’s eager slam poets compete for the title of WNS King/Queen of the Mic title at their #PoetryLeague. The league is not merely just a monthly poetry competition, it is an actual league where every month points are tallied. And by the end of the year the top five poets with most points compete at the WNS international youth poetry festival to be crowned that years champion.

And so the episode that took place on the 1st of July, was by far “the most epic episode” yet. The show featured an all star line up with some of the biggest names in South African poetry like Lebo Mashile, Myesha Jenkins, Quaz Roodt and Lati Matjeni with some live music from Scotty Lloyd and Showcase, and to close off the show, myself, Rabbie Wrote.

From March to July, during every second half of the show, one of the five poets who competed at the youth poetry festival the previous year gets to showcase their work. And on July 1st it was my turn to flex my skills, and man did I choose the best day to do it. The show kickstarted with moving poems from Lebogang Manoko and Thobani Mntambo. There is something mind blowing about how someone can get on stage and use a unique way to speak about issues that affect us all. In a country where most of the communication is in English, when that person is able to articulate themselves fluently in their mother tongue, it makes the experience of listening to them even sweeter. Poets like Abospitter and Siyabonga put me in a trance with their praise-like Xhosa poems on the day. I didn’t understand 90 percent of their poems, but I knew they were good because they reached deep inside of me and set my joy molecules alight. Sometimes you don’t need to understand the language to feel the poetry.

The second half of the show began with trading from newly published anthology titled To Breathe Into Another Voice, a poetry and jazz anthology edited by Myesha Jenkins. When the poetry and jazz eased up a little, Scotty Lloyd took to the stage with some melodies before Lebo Mashile got the audience in a frenzy by just walking onto stage.

Mashile performed a few poems from her new album, Moya. When I was backstage, I remember hearing a line that hit me. The line went something like, “how many times did you keep it together while your insides were unraveling?”. I just don’t remember from which poem it was, except only how nervous it made me feel especially since I was next on stage after her. I remember not even being able to hear Mashile properly, because the audience was so loud in their screams. I was not sure if she was done and I should get ready to go on stage. I remember thinking, “shouldn’t she be closing the show?”.

But then I was called up. And for a month I had rehearsed. My performance was well received. I had never hugged so many people and said ‘thank you’ in one evening. The following day Twitter was still abuzz about the show that was. It is heartwarming when compliments don’t only come from the same point where tempered logic and emotion meet, but from the comfort of someone’s couch the following day after they have processed the poetry.