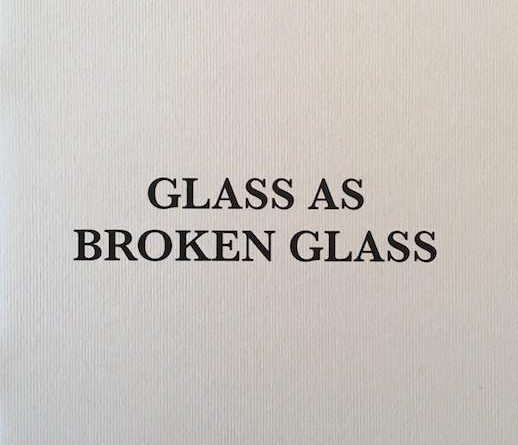 Even by pamphlet standards this is a very short collection, there are only eight poems. This feels a bit mean-spirited, though it is a sturdy and elegant publication, built to survive the frequent handling it will get. These are intriguing and provocative poems which will repay further attention. It is worth noting that the initial print run of only 150 copies sold out within a month, and the booklet was reprinted in February this year.

Glass as Broken Glass is a breakup album, a recording of some unnamed but devastating loss, full of images of fragility and destruction. The poem which gives the pamphlet its title, ‘Domestic’, is allusive and atmospheric

Something has happened but we are not told what – a quarrel, a breakage, an injury, a declaration, a dissipation, a dull fact of damage, all conveyed in a series of images

The poem which has the most power is ‘Superposition and Collapse’. Apparently about a dropped phone,

Face-down beside the kerb, it looks unbroken.
I could leave it there, like Schrodinger’s famous cat,

the damage quantum, both smashed and not-smashed.

The title refers to the theory in physics which explains why things sometimes seem to fall apart just because someone looks at them. It is stunning, recording a complex mix of baffled self-blame and grief.

Despite their attractions, I find myself irritated and thwarted by these poems. Sprackland has such an ear, such an eye for a perfect image – I particularly liked the image of a body as ‘a tray of fragile curios’ in ‘Hunterian Triptych’, dealing with a visit to a museum full of skeletons, and the Ikogosi image in ‘Fever’

The Ikogosi meeting between your body and mine
is as burning skin sticks to the brand.

I had to google this one, so I’ll share – it’s a spa in Nigeria where uniquely, a hot spring rises beside a cold one. And yet there are flat and pedestrian phrases like ‘absolute certainty’ or ‘pushes on into the interior’, that bring you up short.

They are all the more frustrating since they overload the line, and distort the complex metrical pattern already set up. For instance, in ‘Superposition and Collapse’, there is a line ‘Like the robin egg child-me found down at the rec’ which has a superfluous syllable, making for a lumpy and distracting read. In other places, such as ‘Snail’, or ‘Hunterian Triptych’, Sprackland sets up a fluid, subtle metre, only to land on what feels like the wrong syllable – skylight, in Snail, or moonlight in ‘Hunterian Triptych lll’. It reads as if it’s been composed simply by eye, and without regard to how it sounds. And yet in ‘Seven Years’ Love’, the use of hiatus and pause

is masterly. I feel a bit peevish when I raise these niggles. There’s a vision and a range here that transcends pedantry, and Martha Sprackland is a poet whose career I will be watching with great interest.