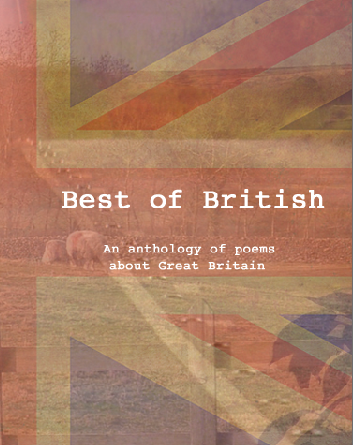 How does an editor select poems for an anthology, especially one with the words ‘Best’ and ‘British’ in the title? In the Introduction to Best of British, co-editor Jill Munro informs us that the original aim ‘to cover every corner of the UK, in an attempt to poetically (and politically correctly) map every angle in its diversity and flavour’ was an impossible task, especially so as this is a compact anthology of 56 poems from 38 poets. The emphasis was then more on that word ‘best’; what were the best poems from the submissions, a selection process that was transparently subjective.

The result is a collection of poems varied in subject matter and style. They are not themed, so the reader comes to each poem without preconceptions. They depict contemporary places or experiences, or their focus is on historical event/s. Zooming in and out of the anthology, a kind of Google Earth method, takes the reader to, amongst others, London (several times), York, Kent, Coventry, The Fens, Portsmouth, Staffordshire, the Welsh Borders, the Outer Hebrides, Glasgow, Lancashire, Devon, Lincolnshire, Ashby De La Zouch, Great Yarmouth, Blackpool, Brighton, and, from a bird’s point of view, Norwich. The humour is well-sustained in Sue Burge’s ‘A Peregrine Falcon on Norwich Cathedral Suffers Delusions of Grandeur’, as the falcon plans to attack homing pigeons that have been released by a ‘flat-capped priest’:

then strike, de-feather on the wing …

We don’t know the specific place of Angela Readman’s poem ‘Against Neighbours Having Sex In Winter’, but she makes the central experience seem thrilling, an experience all of us would want even though we might deny it;

It could be bad for you to go at it like that,
flap off the sheets just as the houses crouch

for another night to be needled to the roof
flake by flake.

I enjoyed the tensions inherent in ‘Omens’ by Alex Toms, the way the lines ‘zig zag’ to imitate the course of a hare used for divination purposes, and, in this case, as a precursor to Boudica exacting her revenge on enemies who have tortured her:

My men and I rode south, to Camulodunum
Where the townsfolk cowered in the temple.
I lit the torch.

In ‘For Context’, Janine Horsford hopes that a British girl she meets will share her boredom of the suburbs, ‘pronounce the deadness of this town’, where they are both new arrivals. The poet hopes that she can know the other girl ‘in the way that you knew girls at primary school’, that with her, like with them, ‘there would be no shushing of loose Carnival tongue’, and that upon hearing the girl say, ‘there is not one / @#£% to do here’, she would be emboldened to:

… come chorusing into that pronouncement
like the clean metal rainfall of a dozen tenor pans.

The expectation is soon thwarted, the girl reveals that her discontent is not to do with boredom, with wanting to kick out at small-town pretensions, but because the town is ‘too built up’ and that she is ‘used to riding horses’, so becoming for the poet, by way of this confession, ‘an unexpected traitor’.

In ‘Becoming British’, Lawrence Wilson satirises the bizarre questions posed to people wishing to settle in the UK in the Citizen Test:

What is the UK’s most popular sport?

And is one really required to care?

What is commemorated on 5 November?

Wilson juxtaposes questions from the actual test with his own:

Why are you having trouble answering?

The poet’s mordant responses, culminating in ones which are more heartfelt and lyrical (‘Because we wanted to see the sun set at a different angle… / Because something called / and we answered’) expose the skewed and partisan nature of the test, its questions, and the wilful pedantry of the gatekeepers who pose them.

Rebecca Bird right-justifies ‘Vent’ and, without use of upper-case letters and punctuation, effectively evokes a place which is specific, even though unnamed, where:

Maggie Sawkins’ prose poem, ‘Paperback’, encourages the reader to pause after each of its notated sections via typographical mark-ups that give the impression of a musical score:

Tiny penguin looking east | feet planted in the horizon | a tagline
Poetry of the ‘Underground’ in Britain, in pink | William Blake’s
Half-man half angel splayed naked against a sky on fire

The poet says this is a personal testimony to ‘the words that spurred me’. At one point she notes the anthology’s gender imbalance (‘sixty-three poets | three of them women’), which led me to count male/female representation in this one, based on a crude survey of names only: 36 by female poets, 26 by male. I offer no other comment in this context, only that awareness of intersectionality (how race, gender and class interact) can only enhance anthologising practices generally.

Sometimes we actually seem to become a place that we know well. In Lewis Buxton’s ‘Motorways’, relentless travelling creates a kind of anguish: ‘Road signs are my chest and all / the rusted signs that collect on it. // My heart is a roundabout / with cars going the wrong way’, and even the desired end of the journey is hard-won: ‘I spat the sea into existence / and every pebble on the beach’.

As Jill Munro notes, this anthology was born in a ‘different era’, pre-Brexit certainly, but before more recent shocking terrorist attacks and the appalling atrocity of the Grenfell Tower fire. Everything changes, of course: these poems are evidence of that. John Foggin notes in ‘Remember’ that his book ‘stopped short of dark satanic mills / and steel and coal / and disaffected / working men’. Something he, and others, didn’t notice, ‘Not then’. Caz, the girl in ‘First Thing’ by Sarah James, seizes her early morning walk on Blackpool beach, ‘Digging her hands in, // … holds the softened glass sparkle, / … lets its glow trickle / from her fingers like star-dust’, as respite from being a carer for her family. Respite this might be, but the presentation of this coastline is the antithesis of any literary pastoral idyll. This vibrant collection takes the reader to unexpected corners of the UK, where the personal is, frequently, the political.