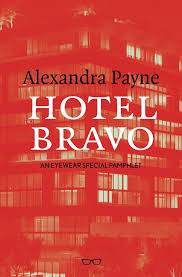 Hotel Bravo, a debut pamphlet by Alexandra Payne, covers various themes including cats, flats and Jeremy Corbyn, many of which will be familiar to young people who reached adulthood in the early 21st century. Payne writes from the perspective of a ‘woman in her twenties’ trying ‘to figure out if there’s life/ among the pizza boxes and general detritus’. As the blurb points out, she is a member of a generation bored by the depressing world passed down to them, a world of high prices and low pay, tax evading millionaires, environmental devastation, gourmet burgers, Donald Trump and Boris Johnson.

An early highlight is the third poem ‘Top deck of the bus’, a Shakespearian sonnet (i.e. one which rhymes abab, cdcd, efef, gg). Shakespearean sonnets are a very romantic form and Payne’s sonnet is indeed romantic, however she deliberately deploys a series of unromantic objects: Tesco, a sausage roll, a bus ride, Tinder, a can of Carling; all of which work to undercut the orthodoxy of the form whilst adding wonderful pathos to the poem. The rhymes are neat, particularly the crucial closing couplet ‘you won’t look into your can of Carling:/’All the more fool both of us, darling” which brings an epiphanic sensation to the ending, just as a Shakespearean sonnet should, disturbing the lines above it like an overly ambitious pull from a jenga tower.

The most heartfelt poems in Hotel Bravo are those which examine more personal themes, of which there are two diverging, but occasionally intertwining, strands: Payne’s depression and her mother’s cancer. ‘I’m very grateful for Citalopram’ is an ode to the antidepressant in which we see Payne suffering two of the drug’s common side-effects, sweating: ‘Accompanied everywhere by the smell of sweat,/ I am wet with it, almost enough to be done with it.’ and insomnia: ‘Legs at night dance a tarantella,/ won’t let me sleep, there’s a watch to keep.’ Fortunately by the final stanza Payne is ‘doing good’, remembering ‘what it was like to feel bored’. The poem is sincere and feels very real, Payne’s personality shines through the sadness and it is impossible not to feel some empathy with her.

Perhaps the pamphlet’s strongest moments are ‘Mother’s day’ and ‘Bodily fictions’, which are two very different explorations of cancer. In ‘Mother’s day’ Payne describes visiting her mother in hospital:

Something was beeping –
you’d knocked a cannula out of your hand
with a minor movement, scratching, or reaching for water –
the godlike machine protesting
for a nurse.

Her mother’s ‘comically dopey’ helplessness reduces her to a childlike state, so the duty of care is reversed and Payne becomes the mother, ironically accompanying her own mother to an ultrasound scan where after the ‘doctors left’ and she has ‘wiped off the medical goo’, Payne’s mother gets dressed, cries and says: ‘The last time someone did that, it was you’. Referring, of course, to the previous time she had an ultrasound scan, when Payne would have been a foetus and the subject of the scan, thereby reasserting the roles of mother and daughter.

‘Bodily fictions’, on which the pamphlet ends, is a more experimental poem without an easily discernible narrative, it begins:

each blink a comma

in the sentence of the mouth

everything is not quite all right

It is the only poem in the pamphlet without punctuation, yet interestingly, the human body is compared to punctuation in the poem. Payne’s descriptions recreate the heightened tension of the hospital waiting room: ‘every inhale the knock knock knock of an MRI/ every exhale the squeak of a shoe’. Hotel Bravo is an excellent début pamphlet laced with quirks, charm and wry humour. I look forward to reading a full collection.