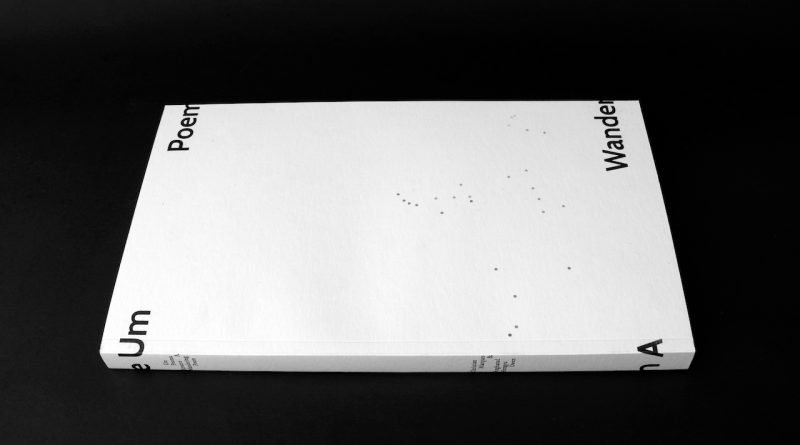 Um Poema Errante /A Wandering Poem is a bilingual, English-Portuguese collaborative project by poet Christian Marques and graphic artist Angharad Hengyu Owen, tracing an eight-month journey across Europe and Asia. I am reviewing the ‘zine edition’, which is a 32-page, smaller-than-A5 booklet published by the Colliding Lines collective. This accompanies a larger, 200 page production, available on the author’s website, which looks like a thick, glossy, white block of pages – more art-object than book. It is a tantalising, curious project to unfold and review.

The zine edition forces me to jump straight in – through the titleless title page and sparse cover – to the first poem, with the English translation on the left page and the Portuguese translation on the right. The first words read ‘Acknowledgement / Nice’ before leading straight into the first line of the first poem. I do not speak Portuguese but can establish that ‘Reconhecimento’ is the mirrored translation of ‘Acknowledgement’. There appears to be a gap where ‘Nice’ should be. A quick flick through the zine shows that the word ‘Nice’ appears again twice more at the top of two further pages, seemingly without a translation (it may be the place in which the poem is located at the time?). This gap in expectation introduces the rule that Angharad’s design is not simply a mirror of Christian’s work, but is also an aesthetic interpretation of the text itself, just as Christian’s original poems are an effective translation of his experiences while travelling.

Presenting two languages within the text also introduces themes of transition and the migration of subjects. In an online video, Christian notes that the translation led to interesting changes of expression, just as Angharad’s design leads to new meanings surfacing: ‘everything has an effect on everything else’.

The opening poem, typed as formatted below, contains a pleasing use of white space, creating a secondary poem on the page. Through her use of space, Angharad creates a ‘vertical word tunnel’ using Christian’s words, and applies another layer of meaning and interpretation to the text. The base poem reads:

A man, found himself being without knowing

And in an instant, his horizon

out, could no longer be

Angharad’s use of space creates this secondary poem:

I love this ‘poem within a poem’ technique, for it demonstrates the unique partnership between word and design that this book promotes.

Within experimental/design-based poetry, it is important that the layout is relevant to the subject matter. This perhaps doesn’t work as well in the poem on page 10: the layout overtakes meaning and becomes isolating. The English translation looks like a tower block to the left of the page, with the Portuguese text on its right hand side. It runs down the tower’s edge, set out as a more traditional form. The white text on a black background makes it look like a tower at night, with the white words symbolising room lights. The words in the ‘tower’ are spaced out to create this effect:

The English translation features the phrase ‘The city hides secrets / alchemical / esoteric / in the transfigured geometries of the old houses’, which justifies the poem’s concrete design. However, the rest of the poem contains quite beautiful imagery which I feel gets lost inside this stylistic form, such as, ‘the wood rots with a wicked appearance / its smell spreads stories’. Personally, I find this example too technically Concrete and gain more of an effect from reading the Portuguese version. Having to establish what the words are through the spaced out design slows me down and therefore distracts from the original wording.

The strength of this book lies in its layers of interpretation between the word, the page and the reader. The poem might not have been designed to look like a tower at night at all. What I distinguish as text in the shape of the moon or a fingerprint, or even a ‘word tunnel’, might not have been the intended effect. This successful collaboration leads to a transcendence of experience for the reader, and is highly effective as both a collection of poetry and a piece of art. 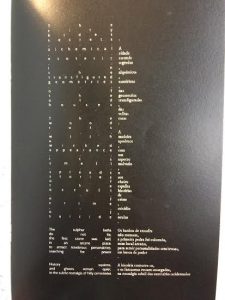