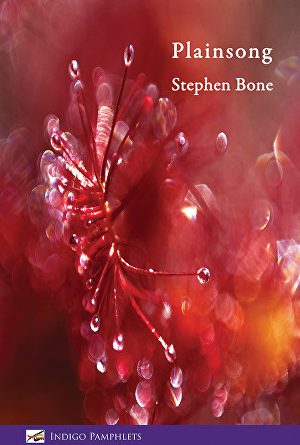 Plainsong is Stephen Bone’s second pamphlet; his first, In The Cinema, was published in 2014. The eponymous poem in this collection, placed at its conclusion, aptly captures the pamphlet’s processes, tone, and language:

The poet contrasts this expansive, sensuous and exotic painting of natural forces with a more carnal, lusty and sinister ecosystem. Throughout the work Bone underpins sumptuous images of beauty and wonder with unnerving processes, both visceral and surgical. His use of language, and the scenarios that Plainsong imagines, are thought provoking and captivating.

The scope of Plainsong is broad, as Bone moves between timeframes, context and personae with ease, juxtaposing repeated tropes of beauty or grandeur, written in broad lyrical style, with more sinister sentiments. For example, ‘Walter Potter’ is a tale of delicately stuffed animals that a taxidermist gives an uncanny second life, and ‘Sundews’ depicts a gnat seduced by a carnivorous plant, in languid and psychotropic verse. Bone explores this latent horror in fascinating ways, and ultimately, it animates the text with a morbid but enthralling energy.

This thematic conceit also leaves a lot open to interpretation, and each reader will probably draw their own entirely different reflections from the sequence. In light of the title, some of the religious images particularly resonated with me. In ‘Boyhood of Sensesino’, a piece about a famous castrato, the beauty of the young singer’s voice, or “God’s gift,” is grounded by a traumatic image of “polished knives.” Read in theological terms, the irony of this symbolism is pertinent: a deity’s creation is savagely mutilated to better praise and amplify the deity itself. At the same time, the poem touches on less transcendent narratives, the castrato’s father implied to have sold his son into his disfigurement. Perhaps Plainsong is a text focused on power struggles, demonstrating entrapment, exhibition, sexuality and ownership. Regardless of which reading carries more credence, this versatility and openness should be celebrated. Plainsong gives enough to the reader to allow them to reflect on its imagery, but holds back from being overly didactic.

I have few criticisms of Plainsong: for the most part this pamphlet is coherent, well-imagined and vividly rendered. The poems in which Bone focuses in on animal and plant life are especially notable, illustrating majesty in unfamiliar instincts, processes and perspectives. By contrast, the poems centred on more quotidian, modern human points of view, such as ‘Cold Sauvignon’ and ‘Aunt’, are less effective, perhaps because the poet felt there was less margin to draw mundane scenarios as vividly as some of his more inhuman narratives. Still, these pieces do little to disrupt the coherency of Plainsong, and indeed fit into the collection extremely well.

Plainsong is a strong work and marshals its thematic content extremely effectively through carefully crafted narrative and vivid language. Whilst all the poems are short and relatively accessible, the clear complexity in Bone’s writing necessitates reflection from the reader. In sum, this is a highly engaging work, and I look forward to reading more from this poet in the future.