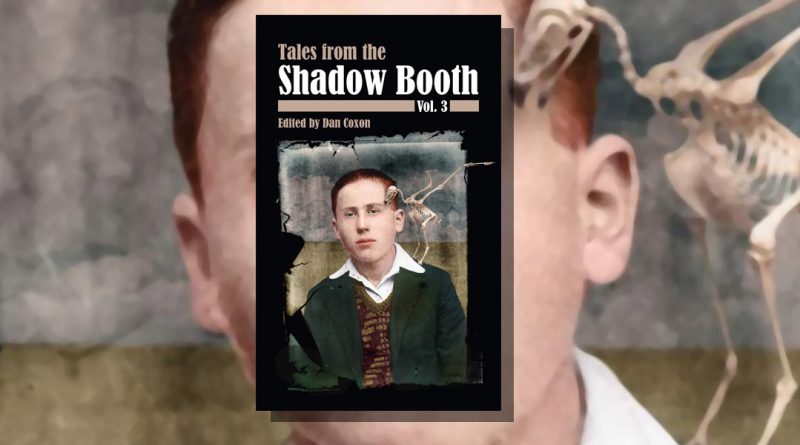 Having recently reviewed the excellent This Dreaming Isle (also edited by Dan Coxon), I was intrigued to discover if the quality matched between these weird and eerie anthologies.

First impressions; beautiful cover artwork (Limbert Design) of a sepia tinged schoolboy posing, with a bird-like dinosaur creature perched on one shoulder. That, and the size of the tome. The book is so small. I’m not talking postage stamp dimensions, but I’m certain my first mobile phone was larger. Putting aside a rhetorical does size matter? I was keen to get reading. For brevity, I’ll focus on the stories which I found most compelling and in the random order in which I read them. 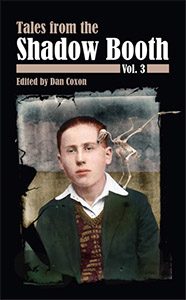 The back page blurb warns – “Enter the Shadow Booth, and you will never be the same again….”

Dan Coxon’s three page teaser that opens the anthology strikes a note of menace from the opening line – “He should have seen them long before the first brick is thrown…” A schoolboy – Jared, is chased by three bigger boys through an inner-city concrete jungle – his only means of escape is via a now you see it-now you don’t Shadow Booth. He enters, and instantly disappears from the attackers. Where to? Nobody knows… The combined sense of mysterious loss and tension created in this short piece sets the tone for the rest of the anthology; peculiar versus everyday life. In my opinion, the essence of weird and eerie fiction.

The mysterious loss theme continues into the first lines of ‘Cousin Grace‘, by Jill Hand – “Cousin Grace liked marzipan, standard poodles, and the actor Jean Reno. Three years ago her house ate her…” Can you resist such an intriguing opening? Doubting the official explanation, that her cousin has simply disappeared, the narrator spends the three years in a fruitless search for her cousin Grace who had mentioned a dream door somewhere in the hungry house.

e.g. – On hoping the dream door will, one day reappear in the house and Grace will step out, the exasperated narrator ponders – “I hope she does, and in another, I dread the possibility. For where will she say she’s been. And what if she’s changed…?”

Highly original and visually impressive scenes are common throughout the anthology. ‘Demolition‘, by Nick Adams starts off conventionally with news of an old shopping centre that’s about to be demolished and replaced with a modern version on the outskirts of the town. And yes, you’ve guessed it! The old shopping centre is having none of it and comes to life – rebelling against its own destruction, dragging itself towards the new kid in town. Crowds gather and the police are informed –

“It’ll leave scars on the tarmac, will grind bus stops into safety glass confetti… will obliterate the peace statue on the mini roundabout by Sainsbury’s…”

I’d never rooted for, and felt so much empathy for, an old building before this one.

‘The School Project‘ by Richard V. Hirst opens like a teenager’s essay describing a routine visit from a School Inspector, Mr Sally – “Sirs, we think it important you know that we were sneezing when he arrived…” Events unfold quickly from a state of relative calm into a gruesome act of pure evil. The students here linked me back to the brick throwing chasers of Jared in the opening teaser. The matter-of-fact essay style serves to elevate the menace of the finale. Ofsted would not approve of what happens to Mr Sally.

Also dealing with a school locale is the deliciously titled ‘The Cherry Cactus of Corsica‘ by Verity Holloway. At 35 pages, we are allowed a deeper insight into the characters and their backgrounds and motivations. An artistically talented and usually impeccably behaved student – Joshua – is caught drinking schnapps by his tutor Kurt. As Kurt becomes more involved in looking after the welfare of Joshua, unearthing strange secrets about his past, events take on dark, sinister twists that shift into Oscar Wilde territory. My hunch is that the striking art cover is framed around the Joshua character.

Finally, the standout story for me was ‘Ten‘ by Gregory J. Wolos. A mysterious woman named Jenna with an almost bald head is found injured near the Mexican border in the yard of the equally mysterious Claude – an artist and carver of elaborate wood etchings. I found the rich details almost poetic and very powerful. As Claude helps Jenna regain her fitness the pair exist in a dream state in the small dwelling. Jenna contemplates the loss of her new born child along with a growing distress of not grooming the few hairs she has on her body –

“When her host – captor? Cleaned her, he’d have wiped away her drawn-on eyebrows… what else had he noticed? Certainly the drops of mother’s milk tattooed beneath her nipple that some of her lovers mistook for tears. Did her bristly patches confuse him…”

The satisfying ending explains the choice of ‘Ten’ as the title.

So, does the quality match up to This Dreaming Isle (shortlisted for the Shirley Jackson award 2018 – best edited anthology)? A resounding YES from me – and more… I’ve ordered Vol 1 & 2 in the series. The book itself may be tiny, but the stories inside are towering. 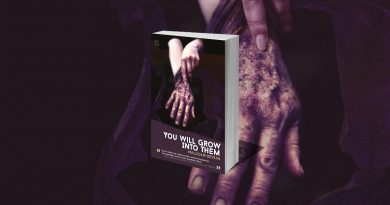 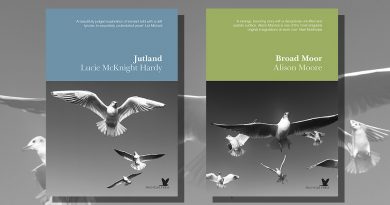 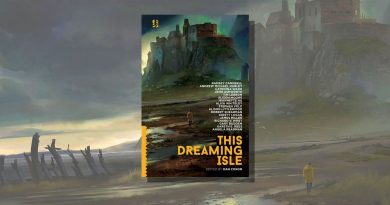