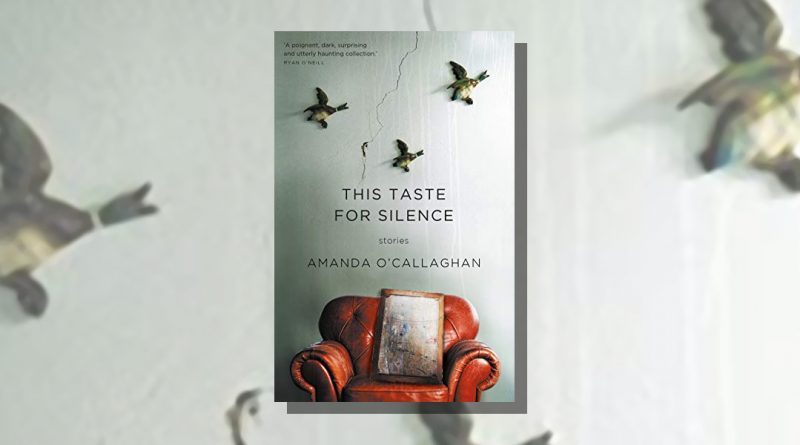 The stories in Amanda O’Callaghan’s debut short fiction collection, This Taste for Silence (University of Queensland Press), vary from flash fiction to the longer end of short stories. The shortest is a paragraph, while the collection’s closing piece, ‘The Painting,’ is 40 pages long. The collection alternates between these longer and shorter forms, which makes the experience of reading it feel dynamic in terms of the different tempo of the pieces. There’s much to appreciate and learn for fans and writers of both forms in how the stories sustain and develop character and plot in the longer form pieces, or deliver a complete tale in 500 words or fewer.

One of the collection’s definite themes is mortality. I haven’t attempted an accurate body count, but it runs high. Death looms in the foreground or the background of probably the majority of the stories.

Reading it doesn’t feel unduly morbid however, due to the author’s variety of approaches to the theme. The short ‘The Mohair Coat’ for example, is a straight exploration of grief and bereavement, where the life of the narrator’s mother is poetically (and economically) revealed through the key object of the coat.

At other times, the style is more macabre and dramatic. In the opener, ‘A Widow’s Snow,’ Roger Kempton, a florid antiques enthusiastic, reveals a murky past after his tongue is loosened by old fashioned pudding and brandy plied by the widow he is courting.  Some of these stories possess a kind of chintzy bourgeois wickedness that reminded me of William Trevor.

A side effect of the macabre is perhaps a tendency towards unreality. As a nurse, I was sceptical of the ease in which the nurse narrator in ‘The Turn,’ euthanises a number of his patients (and a member of public). Mr. Gregory, the history teacher in ‘The Legacy’, a former intern in a Japanese POW camp, chooses to teach the Asia-Pacific theatre of WWII as his special subject. Perhaps it was different in the good old days, but my mind boggles at any teacher voluntarily and routinely opening the specific site of their extreme personal trauma up to a class of teenagers.

In ‘The Golden Hour,’ the protaganist’s husband’s obsession with sin and collection of statuettes of saints act as shorthand for the sinister religious maniac that he clearly is. An observation that struck me when reading the more gothic stories in the collection is the use of ‘euthanising nurse,’ ‘former POW,’ ‘religious tyrant’ – not as clichés, but as signifiers that indicate what we can expect from these characters, and perhaps avoid exploring the complexities of how these identities might apply to individuals in reality. But in a sense, this probably doesn’t matter.

They are more like modern day fairy-tales, and the power of fairy-tales doesn’t come from their nuanced portrayals of stepmothers, but something in the way that their grotesquerie touches on universal preoccupations.

Other aspects of the collection however, feel very real. ‘Memory Bones,’ set partially on a farm in the Australian outback, is meticulous in its topography, but it’s subtly done so that the reader finds themselves so completely in a place without realising what it is that the writer’s done. ‘All the Perfumes’, which finds itself in a similar setting, uses smell as a way into creating place:

“Everything was hot, pulsing out its aroma like a shout. Dust. Dead grass. The mineral bones of the land.”

It’s not just landscape that O’Callaghan does well in this way though, it is also the incidental details of characters’ lives that combine to create a full picture. A brief interaction with an intrusive neighbour adds to the narrator’s feeling of inadequacy, a character suddenly reappraises her furniture as dowdy as she prepares for a date.

This Taste for Silence is an entertaining collection that showcases O’Callaghan’s skill in the long and short forms of short fictions. The stories are often dark, at times comic, sinister and sad. They make use of O’Callaghan’s precise observations gleaned from a different settings to create an eclectic fictional world.

To find out more about This Taste for Silence, visit the University of Queensland Press website.

Amanda O’Callaghan’s This Taste for Silence was longlisted for the Edge Hill Short Story Prize 2020. Sabotage Reviews is covering a number of the indie published titles nominated for the prestigious award, including This Paradise by Ruby Cowling and This Way to Departures by Linda Mannheim. The shortlist was announced in September and the winner will be announced on Monday 7 December 2020.

Reviewed by Jenny Booth — Jenny lives in Sheffield where she works as a nurse and writes short fiction and poetry. She took part in the Northern Short Story Academy in 2019. She has had stories published in Brittle Star and Prole.