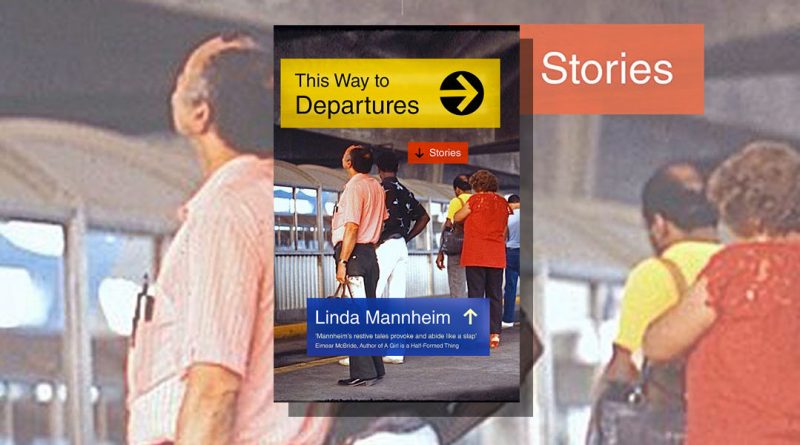 You might have noticed that the world’s been turned on its head. Everyone’s scared, myself included. But be it a crude indicator or worthy bit of cynicism, COVID 19 is a stark reminder of the limitations of globalism – though we can travel with impunity and stretch our hands to foreign pastures, something lingers that can threaten our way of life as we know it.

One of the reasons COVID spread so fast was due to the ease with which we are able to travel between countries. This is something we usually regard as a positive, a testament to our integrated societies, and something that makes us feel safer. Linda Mannheim’s collection This Way to Departures (Influx Press) is a meditation on these ideas of safety, identity and where we call home.

The title of course, alludes to the sign that hangs over coach stations and airports. Like reading a newspaper, the sign ‘This Way to Departures’ is capable of revealing a person’s interests, but it’s also just as capable of concealing them. You might be able to judge something about a person if they’re reading The Guardian or a tabloid like The Daily Mail – but you don’t know what they’re taking from the paper itself. What they’re reading, what they’re ingesting. When you look at the sign, what do you see?

Mannheim asks her readers what really happens when we relocate from one place to another. What baggage do we really take with us, and how much of it is truly accounted for?

Mannheim’s first story ‘Noir’ is set in Miami and follows Laura, a young twenty-something journalist. She lives a happy life with her hippy boyfriend Sam, who shares her love for cinema – that is, until she meets Miguel, a Salvadoran refugee looking for his friends. Miguel fears his friends have become the victims of a new wave of killings from the real-life Salvadoran death squad, La Mano Blanca.

“Sam hummed a mournful disaster-is-coming song while he carried me further into the waves. We had a stock of movie jokes. But it was noir that we came back to again and again, noir that we loved – film noir, with its shadows and horizontal lines and slats of light seen through Venetian lines.”

What follows is a fast-paced interpretation of the ‘noir novel’. There are splashes of sex and violence as ‘Noir’ approaches its climax head-on with grim foreboding, and I believe it’s one of Mannheim’s more finely tuned stories.

The titular ‘This Way to Departures’ story follows the relationship of a couple who meet each other at a student protest against the Vietnam War: our unnamed protagonist and Mr Danny Rappaport. Danny is obsessed with social causes and justice (eventually leading to his departure to Nicaragua) while our protagonist knows the life she wants for herself: a normal life, one that guarantees safety and security.

“His face was not a boy’s. He had that big bumpy nose, big sorrowful eyes, plump gorgeous lips. “I understand now.” he promised. I know why you want what you want. I’ll do it. I’ll go along with what you want.”

“I believed him. That night, he convinced me. He convinced me we could do what our parents could not – have a life together, have a marriage, a good marriage.”

As we follow their years of friendship, Mannheim reflects on companionship and the pursuit of the perfect partner. Sacrifice, she suggests, is important, and our willingness to sacrifice, even more so.

Lastly, ‘Waiting for Daylight’ is a story that follows Mary Vega, a student at Scretton College. She is bright and “lucky to be here”, as she reminds us through her account of her admission – after writing a piece about the best laundromats to sleep in, she managed to land a scholarship at the college. But Scretton is the college where rich kids are sent when they screw up, as she soon finds out from her hedonistic friend Avery Todd, a blonde bombshell who, unlike Mary, is not there on merit, but at the whims of her rich father.

“I stared at the empty stool next to Dale. If I sat there, he would feel compelled to buy me drinks. Avery, usually, could manage to hustle drinks for both of us. “Buy a drink for my friend too,” she would whisper, tracing her long, red nails against the broadcloth backed buttons of a man’s shirt. And it almost always worked, as if she was buying for me by proxy, but now I was on my own. I sat.”

University is a place where most people attribute their dearest friends and new beginnings. Through Mary’s eyes however, we see new depths to old games which have historically made sport of our most disenfranchised members of society. Mannheim demonstrates that the desire to belong to a university far from home, a place fundamentally split by class, can leave vulnerable young people in dire situations.

If you’re looking for a short story collection to take the edge off your lockdown, I would suggest giving Linda Mannheim’s This Way to Departures a go. Its striking depiction of the conflict between identity and place is a star-spangled ride from start to finish.

Find out more about This Way to Departures on the Influx Press website.

Linda Mannheim’s This Way to Departures is shortlisted for the Edge Hill Short Story Prize 2020. Sabotage Reviews is covering a number of the indie published titles nominated for the prestigious award, including This Paradise by Ruby Cowling. The winning collection will be announced on Monday 7 December 2020.