‘Do not pass go’ has been chosen as the title for Joel Lane’s short story pamphlet, the first in the new Hotwire imprint by Nine Arches Press. But that other Monopoly phrase, ‘Go to Jail’, would have been just as suitable; for these are works of crime fiction and throughout the pamphlet there is a sense of foreboding, a fear that someone’s going to get hurt and it’ll all end in tears. 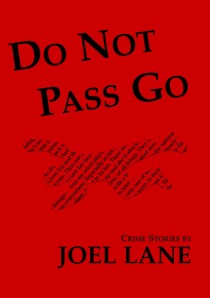 But each of Lane’s stories is also shot through with the blues and an accompanying sense of regret, of sadness. Sometimes this is explicit, like when blues band Nine Below Zero play a gig in ‘No More the Blues’ – a brief story that burns as slowly as good, soulful blues and gradually reveals more about its narrator before sidling offstage and subtly leaving him to his fate. The first story, ‘This Night Last Woman’, though much longer is similar in the way that music and regret go together.

‘This Night Last Woman’ gently ties memory with melody, before letting the association slide, never to return; it feels like Lane’s missing a trick there.

At other times, Lane’s writing is oblique as he fills in one or two details and leaves his reader to plump out the rest of the picture themselves. This is probably most telling in ‘The Black Dog’, a sweaty and morbid story that eventually reveals itself as a Police report documenting a sweaty, sticky death. As with all the narratorial voices in Do Not Pass Go, this one reports back on life/crime seemingly at one remove, as though the speaker is never quite in contact with the life going on around him. There’s a certain disconnect between story and teller, between life and human – and a sense that the one isn’t fulfilling the other.

My favourite example of Lane pitching small details comes in ‘Blue Mirror’ (the story’s name is taken from the – this time fictional – blues band at its centre). David, the band’s singer, slips past two men to whom he owes money and bursts out of a club onto the street…

“Outside, he turned on a loaded shoe and ran in the direction of Hurst Street”

The inclusion of that single word, ‘loaded’, is enough of a small detail to not only remind the reader of the weight David carries about him (literally if he gets arrested with drugs hidden in his shoe, but metaphorically as well), and also of the reason he is now running for his life. With that one word, Lane effortlessly captures the world of music stardom crumbling around David through his drug-fuelled behaviour, as well as pointing up that the drugs cost and David can’t pay the men who are chasing him.

The final story, ‘Rituals’, digs deepest of all into the effect of crime on the psyche – as a gang member deals with the consequences of interrupting a gay porn film before the money shot. That makes it sound more comedic than it is: any laughs found in Lane’s pamphlet are dark and grimy. ‘Rituals’ shows Lane at his most insightful, though, treading close to the edge of showing sympathy for the criminal while the title denounces the habits and face-saving that characterises a life of crime. Indeed, in this case, those rituals seem to be the beginnings of such lives – lives wasted to serve no real purpose but crime.

That sense of regret, of loss, plays all the way through Do Not Pass Go. The abiding impression is that of lives wasted away and ended. Really, though, these aren’t people whose lives have abruptly ended, whose journeys have been pulled up short; they are people who never really had the chance to pass Go.