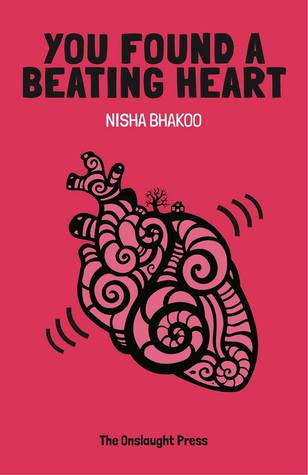 Nisha Bhakoo uses dream-like imagery, sometimes from literal dreams, sometimes to blur the distinction between dream and reality, to investigate what her poems’ narrators and characters are thinking and how they perceive themselves. At times, these give the poems a surreal feel although never so bizarre they lose the reader. ‘Five throats’ begins “She owned five throats and had something stuck in each of them./ She is imperfect and it breaks me.” Later, the poem’s narrator merges with “she”:

I am imperfect and it breaks me.
No overdrawn lips, pure throat, just throat
with an evening scent of rain on the canal.
She could slice break with those high notes.
I could slice bread with my thoughts.
She got lost in her music, shutting the mind off at intervals.
Her song whistling along the wet concrete in yeahness.
Notes rolling boldly like teenage eyes.
Heart in each note. Heart in all five throats.

The poem suggests heartbreak is the cause of the narrator feeling stuck in her situation. There’s romantic evocation in “evening scent of rain on the canal”, but the poem has a timbre of defiance, “Notes rolling boldly like teenage eyes” – the lost heart is being reclaimed. The narrator is readying herself to move on, at least in her day-dreams; reality may take a little longer to catch up because her heart is both in the notes she’s singing and still in her throats.

Nisha Bhakoo’s imagery is often sensual and she doesn’t back off from expressing taboo subjects such as menstruation. In ‘Red one’ the narrator puts a red gummy sweet in her

merry mouth. And speak of the blood
spitting, spewing between my legs,
you reach for a pear, to move the thought
away, the most mundane
and shocking thing I could ever say.
Your face is as red
as my tongue is red
as my blood is red. This month.

The narrator admits to inexperience in relationships, in the title poem:

The desire to explore is tempered by the fear of consequence, which captures the essence of teenage romance everywhere. Dyslexia is not just a reading problem but a problem with pattern recognition and sequencing, so here it acts as a reference to the way the brain doesn’t necessarily remember scenes in a logical sequence, particularly when someone is deliberately trying to recall a memory. The poet is not afraid to own up to being imperfect and human, she wants to enrich herself with experience. Nisha Bhakoo’s poems build up textural layers, giving readers space to read, feel and interpret the poems without being directed or told how to think.