What is Brand New Ancients?

It is a modern poetic epic, written and performed by Kate Tempest (performed with backing musicians),  that follows the lives of several young people as they grow up, their paths crossing occasionally within a tight and heart-breakingly human narrative.

The band, whose music is similar to The Cinematic Orchestra, is illuminated on their stepped stage by light streaming in through small windows. They work well both as support for Tempest’s words and in their instrumentals. Only in the show’s refrains did they become a bit too loud for the vocal. Distress, frustration and hope were all straining through the instruments, with each character given their own clear musical voice that enhanced the storytelling.

Who are the Brand New Ancients?

“We are all still mythical”, Tempest starts, with the theme of the show. This is conveyed well, through her “epic narratives” of several, regular people whose characters are so familiar that they almost become archetypes. Perhaps, in less skilled hands, characters like Clive (whose abusive childhood taught him that violence was a way to get your point across) would have been undeveloped stereotypes, but in Tempest’s hands they are shaped into the modern, almost mythic, and oh so real characters that burst out of this piece. Periodically, Tempest weaves in Classical references (a Diana here, Pandora there), that help add to a sense of shared patterns of behaviour. “Your fears, your hopes are old”, she says, a comfort, perhaps, that the gods who “walked among us” (as well as, she acknowledges, periodically turning into animals and raping us), “fought for us” and were full of “imperfect”, human traits (“the gods can’t stop checking Facebook on their phone”).

It is the vividly drawn characters that makes this show so powerful. Tempest has a way with creating such believable people with humour and empathy (for example, Kevin, a “testament to the cavalry of men”), crafting conversations that sound authentic and paint the scenes as vividly as her narration (“prayers were not spoken in a silence like this”). Indeed, her words paint the awkwardness of youth with knowing brush-strokes, just as she also captures the flaws of their youthful reasoning (such as testing someone’s fireman skills with arson).

The “two man nation” of Clive and Spider, who “might have been warriors” in the olden days but now have nothing but each other to fight for, resigned to their fate as “the bad guys” and act accordingly, driving forward the plot’s violent climax with Gloria at her pub after last call. In a nice change from conventional narrative, Tommy, Gloria’s boyfriend, returns from his own crisis of faith (“by my love I am saved”) to see her rescue herself from Clive’s assault, buoyed by anger at a life of  past abuses.

What’s behind the Brand New Ancients?

Another facet to the narrative is that of the dangers of fame. Not a new concern, by any means, but Tempest takes it on well, panning out and tying the Cowell-led hunger for fame and fortune to her theme: “the gods are on their knees in front of false idols”. In almost a plea to return to the gods “among” rather than those “distant”, Tommy follows the convention of getting what he wishes (a job in the city as a graphic artist), to finally realise the unpleasant nature of his colleagues, all “overblown gestures like mime artists” and regret his decisions.

The conclusion seems to fit the themes of the narrative: the possibility to dip into a plethora of individual stories. Moving to years later, in the skin-crawlingly awful voice of Clive’s father, an alcoholic, abusive man now emigrated to Thailand (“out here, pension is riches”) where he’s surrounded by “men like [him]”, left wondering about what had happened to the central characters, we are distant once more to these ‘gods’, and encouraged to find our own.

Brand New Ancients ran from 4-22nd September at the BAC. 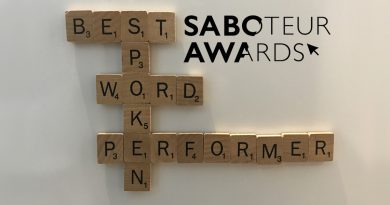