Dr Fulminare, excommunicated alchemist and editor-in-chief of poetry anthology publisher Sidekick Books, turns investigator and interviews one of his own editors, Jon Stone, about the latest Sidekick offering, Coin Opera 2: Fulminare’s Revenge, and what it means for poetry.

Me, the eminent, pre-eminent and always extraordinarily busy Dr Fulminare, performing an interview? Just because the editor in question happens to have performed the mere monkey-work of actually drawing this particular collection of poems together? I would not normally stoop to such trivialities, but Mr Stone appears to have developed ideas of his own about what Coin Opera 2, the sequel to Sidekick’s first ever book (2009’s Coin Opera) signifies, and I am somewhat alarmed by his newfound independence of thought. So conduct an interview I must, at the very least in order to assess the extent of his deviation. I will test his evidence judiciously, then retire to report on my findings. 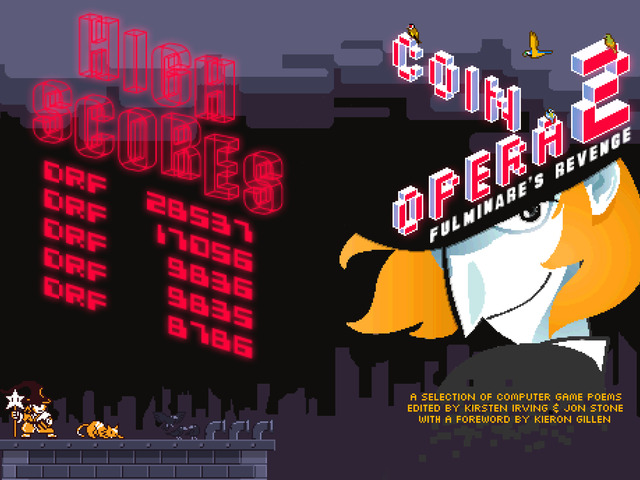 Dr Fulminare: Mr Stone! Sit down, or stand up if you’d prefer. Or sit down. You understand that you must answer fully and truthfully and in a timely fashion?

DRF: Very well then. We shall begin. You do realise, don’t you, that Coin Opera 2, like all the books produced by Sidekick, is a feat of dangerous experimentation that might well rend asunder the minds of every person on this planet?

JS: I do realise that, but it’s also very possible a sign of an emergent genre within poetry, and I’m excited because poetry doesn’t have many identifiable genres. When a label is attached to a type of poetry, it often has a faintly judgemental air: confessional, mainstream, light verse. But if sci-fi poetry can be recognised as a legitimate genre, why not game poetry?

DRF: Interesting, interesting. You actually believe humanity is ready for such a thing, do you?

JS: Well, some of the poems we’ve included in Coin Opera 2 were already published. More than in any previous Sidekick anthology, in fact. Ross Sutherland already brought out his full sequence of Streetfighter II sonnets through Penned in the Margins. And of those we commissioned, many have already found their way into the poets’ own publications. Two were even in The Salt Book of Younger Poets. I think that proves this isn’t just a sort of light-hearted frolic, that game poetry can fit comfortably within a poet’s main body of work, complementing the themes they’ve chosen to explore elsewhere.

DRF: You are quite the dreamy-eyed belligerante. Poets are accustomed to handling any subject matter. So what if one poem is about a game, the next a murder, the next an unfeasible bicycle?

JS: It’s not just about subject matter though. When it comes to games, I think what we see in Coin Opera 2 is that the mechanics and the spatial architecture can subtly inform the shape and the feel of the poem. At least four of the poets, independently of each other, opted to shape their pieces in a way that reflected something of the games they were writing about. There’s also the matter of play, which I keep going on about.

JS: Well, games are all about playing, whether that means beating a high score, putting virtual bricks together to build something, testing your boundaries or following arbitrary rules. In gaming culture, play isn’t just how people interact with games, but also how they attempt to extend the life of games. Creative subcultures emerge around modifying and adding to the content. I think that sense of what it means to play, how valuable it is for our minds, bled out of the games we were looking at and got right into the DNA of the book. It’s there in the structure and the presentation as well as in the poems themselves, but the poems themselves are especially infected with it.

DRF: Mr Stone, your comments are an affront to indecency. I don’t think you even know what DNA is.

JS: But it’s not just that the poems are playful in the sense of joyous and light-fingered, you see. It’s more that they’re testing things. Even when the poets are using their natural voices, they’re extending beyond directly lived experience, projecting their humanity into other worlds with different rules. Or else they let the language and rhythm of games define the feel of the poems, the way the poems play out. They’re adventurous. I think it’s a common thread that’s emerged that suggests the possibility of a genre, something beyond just this book’s identity as an artefact. In fact, I think it could go beyond the book form itself and head out to meet other emerging genres, like interactive fiction and alt-lit.

DRF:  I do like the sound of this ‘testing’. I do indeed. A small consolation, considering the extent of your insolence. Did you envisage this when you began work on the project, and if so, when were you planning to reveal this corruption of your thinking to me, your employer?

JS: Can I just say: you don’t pay me anything. But to answer your question, no, when we started work on this, I was more responding to the fact I sort of have one foot – or ear, perhaps – in gaming culture and one in literary culture, and I didn’t think there was much conversation passing between the two. It felt a little like having parents who never spoke. I wanted to get them talking. Everything I’ve talked about here is more what’s occurred to me lately, reading through the poems as we’ve edited and typeset them and reconsidered what exactly we’ve got here.

DRF: Indeed. Well, then. Anything else you’d like to add before I retire to consider your case, and probably your punishment?

JS: It would be really nice if we could hit our Kickstarter target, so anyone who is remotely interested in this project, please consider pre-ordering the book by pledging some money on Kickstarter.